December 18th, 2015 | International Solidarity Movement, Tulkarm team | Shufa, occupied Palestine
UPDATE 22nd December: After the removal of the road block during last weeks demonstration in Shufa village, Israeli forces told villagers that they will keep the road open in the future. But since then the road has remained closed almost every day, causing Shufa residents a lot of trouble.
*******
Yesterday, on the 18th of December, residents of Shufa village removed a roadblock, that was imposed on them last week as a collective punishment. The soldiers announced that the road will remain open from the 19th of December. 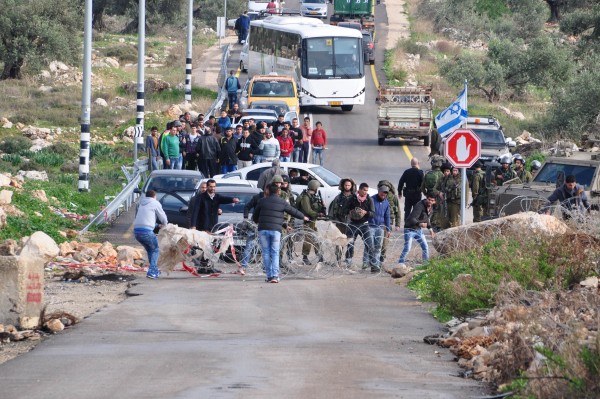 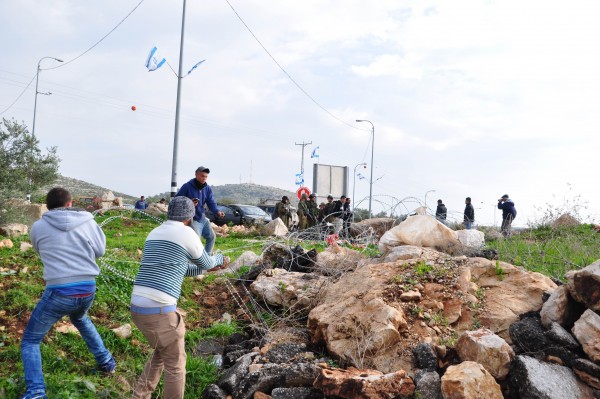 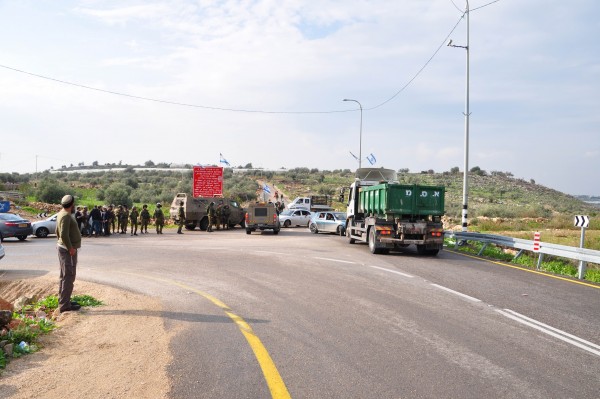 During the last week’s closure of the Tulkarm district, Israeli forces placed a road block between the two villages Shufa and Esba Shufa. As a result, residents of Shufa had to drive 32 kilometers in order to get to Tulkarm city, instead of just 4 km.
Shufa village is located on a hill next to the illegal Israeli  settlement of Avne Hefez. In the past, the residents of the two villages have suffered greatly from Israeli roadblocks. Since the beginning of the second intifada, the roads between the villages have been more or less permanent, not only forcing villagers to drive a 30 minutes de-tour in order to get to Tulkarm, but also making it more difficult for the residents of Shufa and Esba Shufa to meet friends and family in the other village.
The roadblock was removed in the autumn of 2014, but occasionally, Israeli soldiers block the road and check IDs of everyone wanting to cross. Even though the road block is illegal, even according to an Israeli court-decision, the Israeli soldiers re-closed the road during last week’s closure of Tulkarm, and it has remained closed until today.
Since last week, the water pipe that provides Shufa with water has been cut. Earlier this autumn, Israeli settlers entered the village of Shufa in a bus and started building a roadblock with stones and branches, threatening villagers and throwing stones towards houses.
Villagers are very concerned by the expansion of the existing illegal settlement of Avnei Hefetz, as well as the newly built illegal Hahar outpost next to Shufa. The illegal Hahar outpost, with the potential of growing to a big settler-city, will link the illegal Avne Hefez settlement with the bigger, illegal Enav settlement.
Villagers are already being carefully monitored by Israeli soldiers and their surveillance cameras. Many farmers are denied access to their farm, even if it is located next to the village. Neighboring villages have had problems with trash being dumped by settlers on their land. Last week we reported about a demolition of a farm in Kafa village, a neighboring village to Shufa, located on the other side of the Avnei Hefetz settlement. Residents of the Shufa village told activists from the international solidarity movement that by denying them access to their own land, Israel is trying to make them leave their village, in order to give room for expanding illegal settlement. Our village is under constant threat, they say.
Collective punishment illegal setttlements Roadblock Settlers shufat Tulkarm 2015-12-19
ISM Media