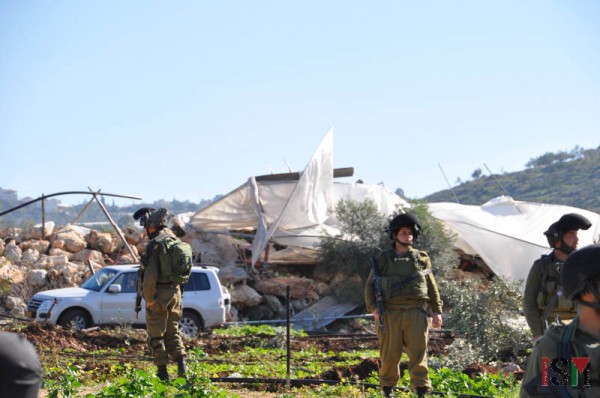 Settlers from the nearby settlements and soldiers watched the scene

On Tuesday, Israeli forces entered the village of Kafa in the outskirts of occupied Tulkarm. Within a few hours, they uprooted over 150 olive trees, 30 lemon trees and demolished four greenhouses from the land of the Esmail family. Even though this land has been owned by the family for multiple generations, Israel has declared it state property. “They didn’t just cause a loss of income, they also attacked my culture and my heritage”, says Munir Fathi Esmail, owner of the land.

The farmers were harvesting tomatoes inside one of the greenhouses when the Israeli forces entered the farm with bulldozers. The army didn’t give any notice for their intervention. The operation was covered by 12 soldiers from the israeli army and 4 men from the Isreali border police. Palestinians witnessing the demolition suspected that some of the armed Israeli civilians that assisted during the destruction were from the nearby illegal Israeli settlement of Avnei Hefetz, located just a few kilometers away. One of the armed settlers was instructing the bulldozer where to go, and telling the international human rights activists that where present to back off. 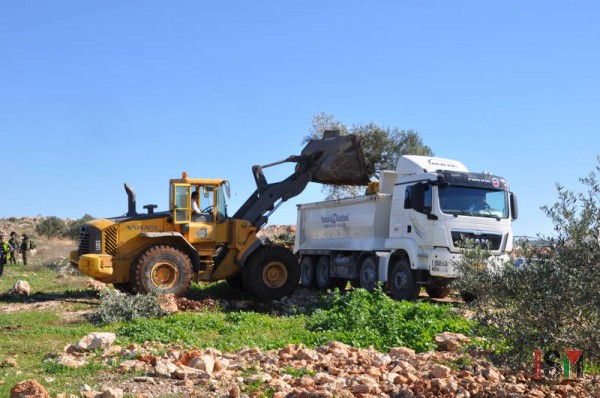 Munir explained that even though he will be able to buy new greenhouses, the economic loss resulting to the uprooting would be severe. “I will be dead before the new trees will be old and strong enough to give the same amount of harvest”, he stated.
The destruction of farmland, wich is illegal under international law, is just one form of oppression that the Palestinian farmers are facing. This farm, like most other agricultural areas in the West Bank is located in Area C, as 60% of the West Bank, fully controlled by the Israeli authorities. For Palestinian farmers in area C, this means harsh restrictions of movement, sometimes not being allowed access to their lands as well as not being allowed to build new constructions. Israel uses these methods as a way to get Palestinian farmers to leave their land, in order to give more room for expanding settlements. But Munir Fathi Esmail is determined to stay : “I will plant new trees, and I will never leave my land.”