Yesterday, Friday the 11th of April, during the weekly demonstration in Kafr Qaddum, the Israeli army arrested two Palestinian youths.

As with every Friday, the demonstration [which has taken place since 2011] began after morning prayers with the people of Kafr Qaddum marching through the village to protest against the illegal settlement of Qedumim. Located on the hills South East of Kafr Qaddum, the presence of this illegal settlement has meant the frequent closure of a road that Palestinians use to travel to the city of Nablus, as well as the illegal seizure of village land.

Yesterday the march stopped at a place on the road where Area B [Palestinian civil control and joint Palestinian and Israeli security control] and Area C (solely Israeli civil and security control) meet. The march was halted by an onslaught of tear gas canisters by the Israeli forces, while Palestinian youths threw stones towards the soldiers.

The violence continued to escalate, as two Israeli military jeeps, a “skunk” truck [a large vehicle capable of firing chemicals at a high velocity that leaves a putrid smell for over a week and burns the skin], a military bulldozer, and around 12 Israeli soldiers arrived at the demonstration. Unusually a traditional wedding also joined yesterday’s protest march. The groom’s family and friends danced amongst the marchers giving the weekly protest an optimistic and happy feel, until the Israeli army attacked and arrests began to take place.

Two young Palestinians were captured during the demonstration. Raleb Halmi (21), a student at Birzet University and Ibrahim Adunan Iomma (21), a student at Al Quds Open University. They have both been taken to Huwwara’s army base with no information available on when they will be released or what they are charged with. The clashes continued until the afternoon, with Israeli soldiers using the bulldozer to clear large stones from the road in order to access the village. At around 4:30PM the army moved back to the settlement and fortunately, despite an abundant use of tear gas, the protest ended without any injuries. 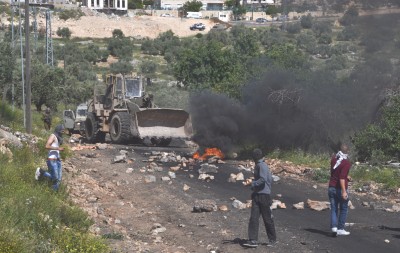