Yesterday, the 16th August, four people were violently arrested at a peaceful demonstration taking place near the village of Al-Masara, on the outskirts of Hebron (Al Khalil). Around sixty demonstrators calling for the dismantlement of illegal Israeli settlements upon Palestinian land were attacked immediately. Although the protesters had planned to go to the Gush Etzion illegal settlement bloc, to once again construct the Canaan protest village, they were prevented as the protest was disbanded by Israeli soldiers within minutes. Those who had been arrested were later released. 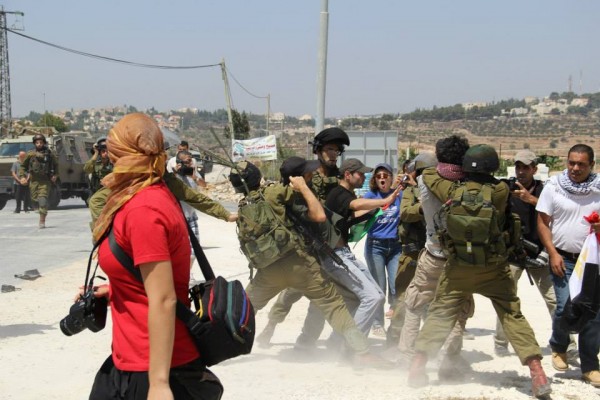 At around 11.30am the procession began, with many people waving flags and calling chants for freedom. An Israeli military vehicle drove by, immediately turned around and blocked the road. Within two minutes two more military jeeps and one police car had joined the blockade. Heavily armed soldiers stormed the procession, splitting the group into two and beating protesters to the ground. The soldiers pushed protesters back and formed a wall of plastic shields. Four men including two Palestinian and two international protesters were arrested.

One of the arrested men, Abed, was holding a camera and documenting the demonstration when he was violently grabbed and pushed by an Israel soldier. Abed shouted at the soldier to let go of his arm and tried to pull away from the soldiers grasp. The soldier responded by strangling and arresting him. Another protester, Muad Al-lahham, was arrested while calmly waving a Palestinian flag.

Local Palestinians are incensed by the continuous settlement expansion and subsequent annexation of their land that deliberately prevents farmers from harvesting their crops. This disabling act of aggression has led to local Palestinian families being financially crippled. As an act of resistance, the local people regularly hold peaceful demonstrations that are consistently met with force from the Israeli occupation. These acts, usually held on Friday – Juma’a – often use symbolism to convey their message. Two weeks ago the locals erected a tent on occupied Palestinian land, as a mark of resistance to the Israeli settlements.

Palestinians here are used to being arrested at their demonstrations. Yesterday, Mahmoud from Al-Masara had his permit taken from him, which is indicative of imminent arrest. For Mahmoud, this is routine and he calmly smoked a cigarette while soldiers decided his fate. Mahmoud was allowed to maintain his freedom, but he never knows when an arrest may come. Asked why he continues to protest he said: “Our goal is to live in peace and to have our freedom like anybody else in the world. Israelis have occupied Palestine, but they can never occupy our minds.” 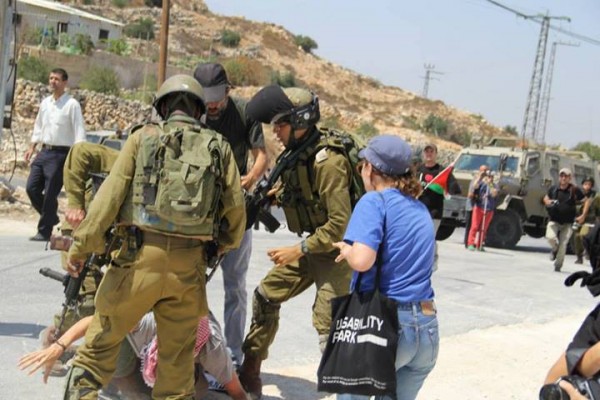 The majority of protesters came from the villages of Beit Ummar and Al-Masara, which are both affected by Highway 60, built by Israeli authorities. The highway cuts through the villages, dividing people from their farm lands. As well as this, the inhabitants of the Israeli settlement of Kami Tzur that is close to the villages use intimidation and force in attempt to prevent the farmers harvesting their crops. Other demonstrators came from Bethlehem, Al Fawwar refugee camp, Ramallah and further afield. The force used by the Israeli army at yesterday’s protest, organised by the South West Bank Popular Committee, demonstrates the intolerance toward peaceful protesters who make a stand against this injustice.