The Canaan protest village was built for the fifth time today, the 27th July 2013, annexed Palestinian land in the middle of the illegal Gush Etzion Colonial block next to the illegal colony of Migdal Oz. The nonviolent protesters stayed in the tent on their land for around an hour and a half, before the Israeli occupation soldiers tore it down, violently repressing the demonstration.

At 11.30am, around thirty Palestinian, international and Israeli activists entered Palestinian land which has been annexed by the illegal Israeli colony, Migdal Oz. They immediately erected a simple but symbolic tent, representing the Palestinian right to the land. Within five minutes, several soldiers had arrived on the scene, heavily armed with assault rifles. They were followed shortly afterwards by several jeeps, and the number of soldiers and police increased to over fifty within half an hour. 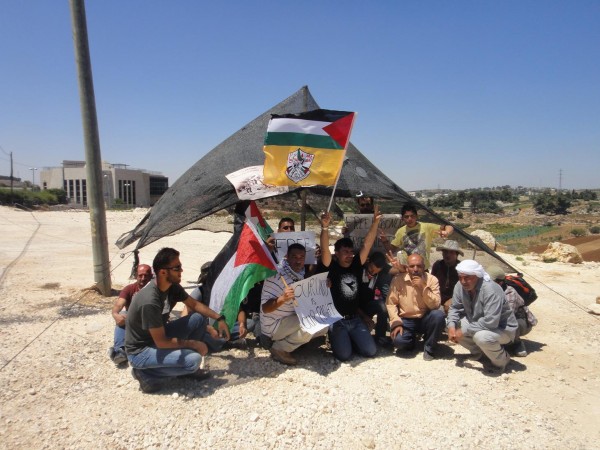 During this time, some colonists left the colony and questioned the demonstrators on their reasons for the protest. The speeches, that had started right after the erection of the symbolic tent continued until around 12.50, when the protesters were given a written demolition order stating that the tent would be demolished in 10 minutes.

At that point demonstrators assembled inside the tent structure and began singing and chanting, whilst the army started forming around the tent. The demonstrators refused to leave their symbolic village.

The soldiers started tearing down the tent with the demonstrators inside it, violently pushing people away with riot shields and eventually breaking the tent pole that the protesters were holding onto. Numerous demonstrators were pushed to the ground. After the tent was demolished around fourty soldiers stayed in formation continuing to drive the protesters away from the colony onto the main road.

The soldiers then stopped the demonstrators and blocked off the road for some minutes whilst shoving the protesters to one side against the hard shoulder. When the protesters after that tried to leave from the car park, the army again blocked the road hindering them from leaving for several minutes without communicating an order. 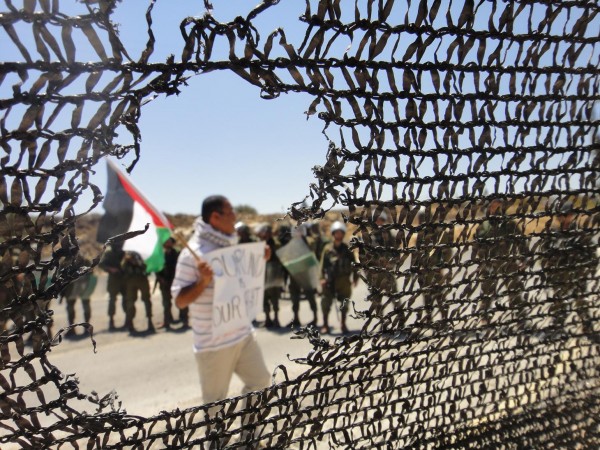 View from inside the tent, protester holding “Our land is our right” sign (Photo by ISM)

The tent village was built to remember the right of Palestinians to their land and to express solidarity with hunger strikers imprisoned for fighting for the Palestinian struggle. In statements, Palestinians taking part in the tent village have expressed their general support for negotiations to end the occupation, but condemned the current round of false negotiations, that have been going on for years while Israel continues to build colonies and colonise Palestinian land.

There have been four previous incarnations of the Canaan village, all of which have been reclaiming Palestinian land and protesting the illegal colonial annexation. The previous tent villages have been built by the South West Bank Popular Committee in the south of the West Bank and have all been violently dismantled by the Israeli occupation military, with arrests of nonviolent demonstrators.

The simple tent structure chosen as a symbol of resistance and the disproportionate military action following its erection; this demonstrates the level of violence that is needed to sustain the illegal occupation of Palestinian land.