At 10pm on August 15th Myassar Atyani, Linan Abu Gholmeh and Leena Jawabreh of Nablus district were arrested by the Israeli police with their friend Waroud Qasem in the 1948 occupied areas of Palestine (‘48), what is now referred to as Israel. The three friends who are all political activists and former political prisoners had travelled to ‘48 to visit Waroud who lives in Tire and has Israeli citizenship. 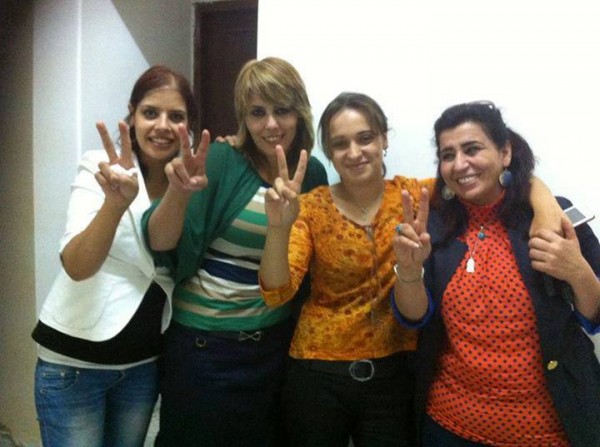 They were traveling together in Waroud’s car when they were stopped by the Israeli police and found to be without travel permits; Palestinians living in the West Bank require permits issued by the Israeli authorities to travel outside of the West Bank, including to the Palestinian capital Jerusalem and the rest of ’48. These permits are notoriously difficult to obtain, especially for activists. The four women were subsequently arrested and transported to Hasharon prison. Myassar, Linan and Leena were detained at the prison until their appearance at Salem military court on the 19th of August.

Waroud, also a former political prisoner from 2006 to 2012 was released from Hasharon prsison and placed under full house arrest with her driving license confiscated. She has another court hearing pending. The other three women are now being held in Salem prison awaiting a further court hearing. Leena on the 22nd of August and Myassar and Linan on the 25th of August.

Their families attended their