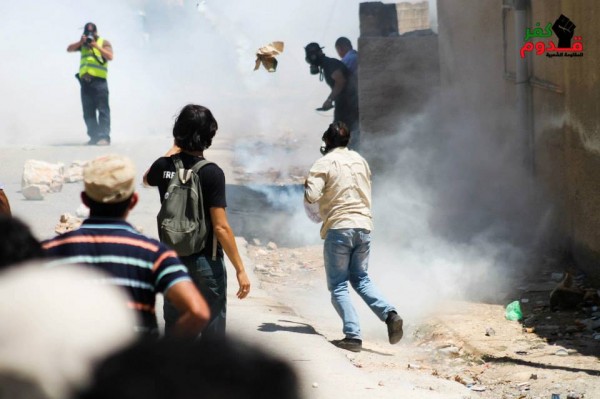 I came to Palestine last Tuesday and joined the weekly protest held on Friday the 8th of August in Kafr Qaddum. The demonstration represented non-violent resistance against the land grab and for the freedom of movement in the village. Kafr Qaddum was my first demonstration in Palestine in solidarity with the Palestinian struggle for freedom, self-determination, human rights and international law.

In the past years the village has gone through several attacks by Israeli soldiers and police who raid the village in the night, threatening the population. Even children under 18 years old are menaced with arrest and when arrested, are beaten along with other Palestinians.

Yesterday as we got off the service (shared taxi), soldiers started firing tear gas and sound bombs directly at protesters. They had invaded the village and chased after Palestinians and several international and Israeli activists throughout the village. Even though I knew the answer I asked two international comrades who were there with me: ‘has the demo begun?’ – ‘No, that’s the pre-demo.’ I can now easily reply to anybody asking me the same. Actually, since early that morning soldiers and police (with at least three jeeps) had entered the village, scaring people and filling the air with so much gas people could hardly breathe.

After one of the first clashes between the Palestinian youth and the soldiers had begun, everyone started running everywhere trying to protect themselves as best as possible. I ran like a hare, taking shelter in a Palestinian house where I was welcomed by a beautiful Palestinian woman dressed in white. A Palestinian man (I understood later he was her son, living in Dubai and returned to the village for the Eid holiday) and a bunch of children all of different ages, from three to 11 years old were also in the house.

I went up onto the roof where children behaved as “special watchers” running from one corner to another following the soldiers’ movements and screaming when they were throwing tear gas canisters and alerting the shebab (Arabic word for Palestinian youth) hiding in different areas of the village. I was offered a cup of coffee which I accepted with joy, longing for something strong and needing to drink so much because I couldn’t make enough saliva. 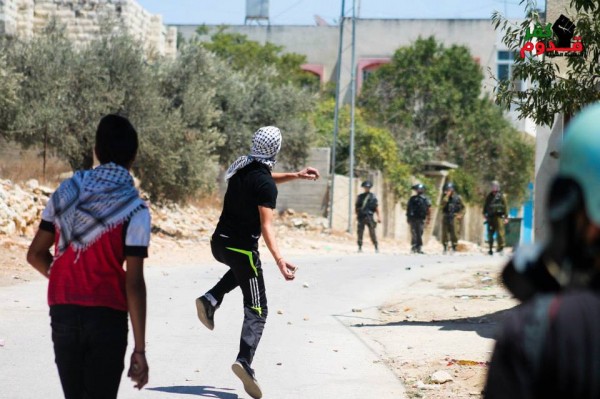 Kafr Qaddum is a small village situated near the top of a hill facing the illegal settlement of Qedumin, which was established on Palestinian land and has been expanding to take over more privately owned Palestinian land. Furthermore the road to Nablus from the village was shut by the army with a roadblock in 2003 and this obstruction means an extra 14 kilometres distance to travel out of the village. The journey is emblematic of the restriction of movement imposed by the Israeli authorities on Palestinians in the West Bank.

The man started questioning me about the international presence in the village, showing he was curious about us, especially about why we decided to leave our own countries and come to Palestine struggling beside Palestinians in support of “another population’s cause”. He was puzzled but happy when I replied that it is our duty to act and stand up for Palestinians and that we speak out for them not only because as internationals we think they all have a right to resist, but as we are all human beings, we should take part in this cause for freedom and speaking out against ongoing violations of human rights amongst many oppressions that the Palestinians have been subjected to for more than 60 years. As we are generally Europeans or Western citizens coming from countries that strongly support Israeli apartheid through economic, cultural and institutional ties, we have the duty to speak out and stand up for international law and the human rights of Palestinians, with the best of efforts.

After the conversation, I joined comrades once again as the struggle was still going on. The demonstration ended but this time the soldiers and police were stopped from arresting protesters but not from injuring people. Children aged 4, 6 and 7 years old and a 75 year old woman suffered badly from tear gas inhalation when it was thrown and shot directly into their homes.

This is the daily life for Palestinians. This is their enduring resistance. Long live Palestine!