On Friday, June 21, the residents of Kafr Qaddum gathered for the weekly demonstration following the Friday prayer. Many residents were prevented from attending the prayer, as 60 soldiers entered the village before the demonstration even began. 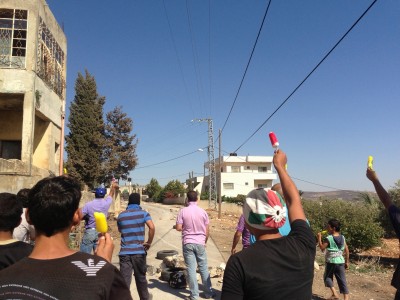 Protesters having much more fun than the Army (Photo by IWPS)

At approximately 11:30, people in the village noticed soldiers entering from the main road closest to Qedumim settlement. They quickly gathered to keep the soldiers away, building defensive stone barricades along the main road. As they faced-off with the army, Israeli soldiers repeatedly pointed their guns at the crowd in order to scare people back to the center of the village.

Nearly one hour later, the soldiers descended down the main road, firing many tear gas canisters and sound bombs at the fleeing crowd. Many people suffered from tear gas inhalation and the surrounding shops and houses also filled up with toxic gas.

At 13:40, the army entered the village again, led by a bulldozer, which cleared away some of the barricades and provided cover for the approaching soldiers, who continued to shoot tear gas at the demonstrators.

At 14:00, one protestor was shot in the back with a plastic-coated steel bullet and was carried away to receive medical attention. Ten minutes later, a camera man and a correspondent for Palestine TV were violently beaten and arrested by the army, showing the Israeli military’s clear disregard for freedom of the press and a journalist’s right to report the news. All of their equipment was confiscated and throw into a nearby field. 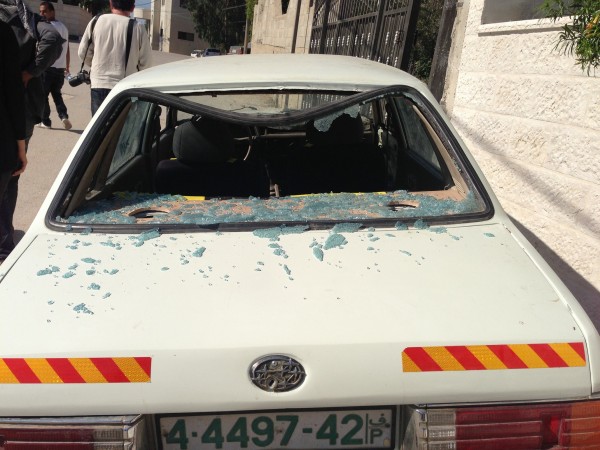 Car window shot out by Israeli soldiers (Photo by IWPS)

Demonstrators shouted for the men’s’ release to no avail. Twenty minutes later, two more young men were shot with plastic coated steel bullets, one in the chest and another in the arm and the stomach.

Approaching 15:00, yet another young man was shot in the hand with a plastic-coated steel bullet, severely cutting his fingers. Following his injury, the army raided the village for the last time of the day when nearly 30 foot soldiers chased protesters back to the center of the village, firing tear gas and sound bombs.

The Israeli army presence continued into the early evening and at 16:00, the group of fifty protestors celebrated their daily acts of resistance by eating ice cream, dancing and singing in front of the 30 remaining soldiers and border police.