New
Home / Hebron / UPDATE: Woman arrested in Hebron is accused of stone throwing by a settler

UPDATE: Woman arrested in Hebron is accused of stone throwing by a settler

UPDATE: Zleikha was released from custody at around midnight, on the condition that she reports back to the police station today.

During Zleikha’s interrogation, an Israeli settler was brought by the Police and asked, ‘is this the woman who threw stones at you?’ to which she replied ‘yes’. This fundamentally flawed method of identification further illustrates how far removed the Israeli military is from any credible system of justice. 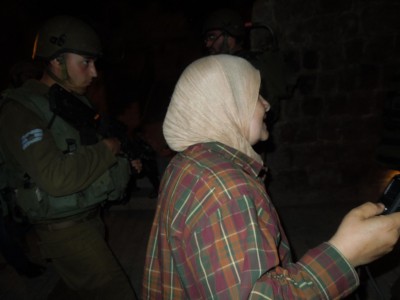 Zleikha Muhtaseb being arrested from her home

Israeli forces tonight,18th May, abducted 51 year old Zleikha Muhtaseb from her home on Shuhada Street, in the old city of Hebron. Zleikha was helping her son complete his homework when a squad of Israeli soldiers invaded her house and took her. She was subsequently taken to be interrogated at the police station in the illegal Israeli settlement of Givat Ha’avot.

Israeli forces claim she was taken on suspicion of stone-throwing, although she was abducted from her home. Such unfounded allegations are regularly used in Hebron to justify arbitrary arrests and detention, of young and old alike – for example, 27 children arrested at random on their way to school in March of this year were accused of throwing stones. It is more likely that Zleikha was arrested for her defence of human rights and resistance to Israeli Occupation.

Zleikha Muhtaseb’s home is on Hebron’s Shuhada Street – an area closed to Palestinian access by the israeli military. Because of these closures, she and her family can only access their home from a back entrance, experiencing the extreme restriction of movement imposed by the Israeli occupation of the Palestinian city of Hebron. Zleikha speaks out strongly about the injustices suffered by Palestinians in Hebron – a more likely reason that she was arrested than throwing stones.