Thirty children arrested in Hebron on their way to school 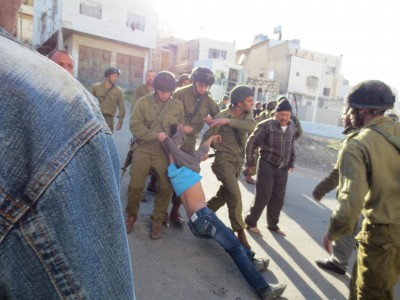 Schoolchild being dragged by Israeli military

Around 30 young boys aged betweeen 7 and 15 years were arrested between 7 and 8 am this morning, the 20th of  March, on their way to the Al-Khalil and the Al-Ibrahimi school in Hebron. Various witnesses reported the soldiers entered the school and arrested all boys that were present at the time. More children were arrested on the street. Soldiers claimed that they were looking for children who had thrown stones.

Inhabitants of the area surrounding the school reported that Israeli soldiers forced their way into a private appartment, moved the family to one room and took pictures of the children passing by on the street. Other soldiers hid in buildings near the school, making traps for the children. The arrested boys were violently dragged behind by the soldiers and beaten and kicked, as shown in video footage from human rights organisation B’Tselem below.

Most of the children were released to the Palestinian Authority around four hours later, but there are reports that some may still be detained by Israeli military, along with protesters who were arrested for walking down Shuhada Street wearing Obama masks, as Obama arrived into Israel today.

This continues a worrying trend of disregard for the rights of children by the Israeli authorities in Hebron.