UPDATE: Man shot in the face with teargas canister at Hagai roadblock demonstration

UPDATE 8th April 2013: ISM activists visited Ameen today at his home in Al Fawwar. He still suffers from intense migraines, struggles to speak, regularly experiences dizziness and a has bloodshot eye. His X-ray shows considerable damage to his jaw, cheekbones, chin and teeth. He relies on heavy medication and is still unable to work. On top of the physical suffering, Ameen is having to pay hefty medical bills to cover the cocktail of painkillers and antibiotics he needs to take on a daily basis. 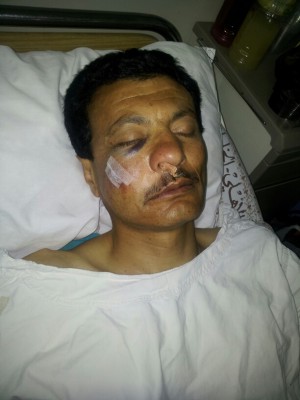 Demonstrator Ameen Bayed after having been hit in the face with a tear gas canister.

The weekly Friday demonstration at the Hagai roadblock was attacked by the Israeli military less than one minute after participants started walking down the road. A soldier shot a metal teargas canister directly into the demonstration and hit Ameen Bayed in his face, breaking his right cheekbone and damaging his teeth. He required surgery in a hospital in Hebron city. The video below shows the moment at which he was hit (At 0.42).

During the demonstration, soldiers fired large amounts of tear gas directly at demonstrators – against the Israeli army’s own regulations, which state that gas canisters must be fired into the air, not straight forwards. Tear gas canisters can be deadly – Mustafa Tamimi of Nabi Saleh was killed when a soldier shot him in the face with a tear gas canister in 2011.

49 year old Bayed, from Al Fawar camp, was participating in the weekly action calling for freedom of movement and for the opening of the main road connecting Hebron with its southern villages and towns. The closure of this road 12 years ago makes the Palestinian residents of these villages travel an additional 12km to reach their destinations in the city.