Activists seal off settlement in solidarity with hunger strikers 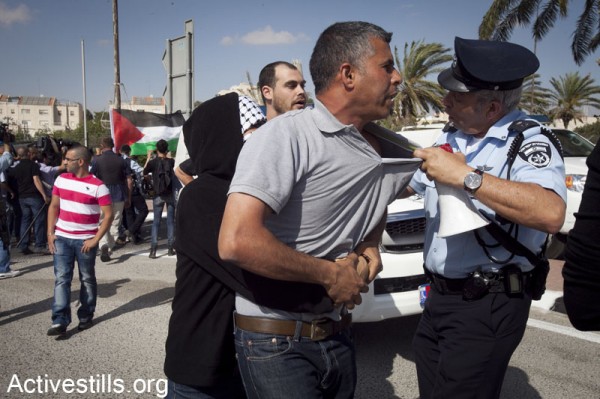 The protesters managed to halt traffic at  the entrance to the settlement for about 20 minutes, before Israeli forces managed to remove them from the road and onto the pavement. Two of the Palestinian protesters were detained and taken to the adjacent police station.

The Ma’ale Adumim Jewish-only settlement is located 7 km east of Jerusalem, and is the third largest in the West Bank, with about 35,000 residents. The entrance that was blocked, leads to the Israeli police’s Judea and Samaria Central Unit’s interrogation center, one of the biggest in the West Bank.

More than three weeks ago, some 2,000 Palestinian prisoners have launched an open-ended hunger strike and their life is in danger. Their demands are simple and the strike’s slogan, echoing through the prison walls, is just as plain- freedom or death. The lives of all prisoners on strike are currently under danger, but among them is a smaller group, which has been striking for a longer period and whose lives are under immediate threat.

Thaer Halahleh and Bilal Diab have not eaten for more than 70 days – since the 29th of February. Israeli courts have rejected their appeals and refused to free them from administrative detention where they remain without charge or trial, subject to secret evidence and secret allegations. They are in critical condition.

The Prisoners’ key demands include:

Palestinian prisoners on hunger strike have been hit hard with retaliation from Israel Prison Services, including beatings, transferring from one prison to another, confiscation of salt (an act that could have severe health consequences for hunger strikers), denial of family and lawyer visits, and isolation and solitary confinement of hunger strikers.

In response, Human Rights Watch issued a statement chiding Israel’s over its administrative detention policy; it said, “It shouldn’t take the self-starvation of Palestinian prisoners for Israel to realize it is violating their due process rights.” Amnesty International also issued a call for urgent action from individuals around the world to contact Israeli authorities about Bilal Diab and Thaer Halahleh.