by Jonas Weber and Jeff 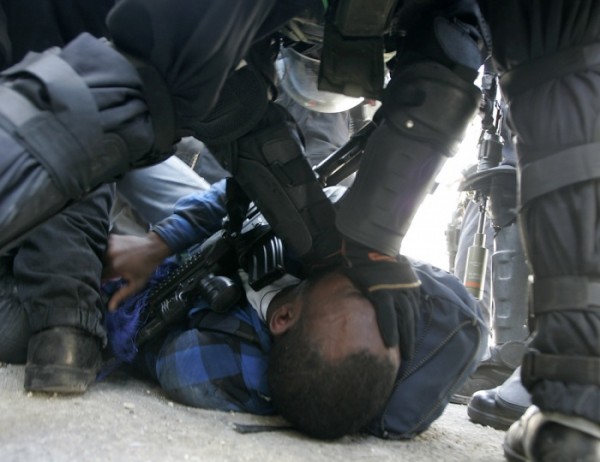 A Swedish peace activist at the Land Day demonstration in Qalandia, outside of Ramallah, was arrested. During the arrest he was kicked and beaten by the Israeli soldiers.

“It happened so fast, I never understood what was going on before I was sitting with my hands tied behind my back in a military jeep,” said Philip after his release on Friday evening.

On Friday, demonstrations were held throughout Palestine and neighboring countries to mark Land Day, a day of remembrance of the fight against land theft in the Palestinian territories, an issue that is constantly present in the area.

This year Land Day was commemorated through the Global March to Jerusalem, engaging thousands of people in the West Bank, in Gaza, inside Israel and in surrounding countries. The idea was to simultaneously walk towards Jerusalem and on the West Bank the march was arranged in Bethlehem as well as in in Qalandia right outside of Ramallah. Qalandia is also the name of the enormous checkpoint denying Palestinians access to Eastern Jerusalem from Ramallah. Because of the wall the Israelis are building, Qalandia functions as a bottleneck which can at any time be closed down by the Israeli Army.

Thousands of Palestinians, Israelis and international activists marched on Qalandia checkpoint near Ramallah to commemorate Land Day and protest Israeli policies of apartheid and ethnic cleansing in Jerusalem as part of the GlobalMarch to Jerusalem. There were also protests in Bethlehem, Gaza, Jordan, Lebanon, and Syria.

The demonstration at Qalandia went off at half past twelve and soon turned into a turmoil when Israeli troops when the demonstratorrs were met with rubber-coated bullets, teargas and so called “skunk-water”, a chemical mixture with a terrible smell that sticks to your clothes. The Red Crescent treated 249 persons during the day of which 20 were hospitalized.

Present at the Qalandia demonstration was Philip Schulz, 20, and some twenty other activists from the International Solidarity Movement (ISM). Around half past three the activists gathered for a joint action. With hands in the air the activist moved towards the ranks of soldiers still shooting bullets into the crowd when the group, consisting of activists from Sweden, Denmark, USA, France, Italy, Canada and the Netherlands, reached the troops and queried their behavior, the soldiers intended to arrest one of the American activists.

“We held linked elbows to avoid being parted by the soldiers,” says Phillip, “but suddenly I saw one of the borderpolice nod at me and I was violently parted from the group.”

During the arrest Philip received several kicks and punches. The day after he is still sore.

“They took me to a cell where I was left to sit untill evening together with a 16 year old Palestinian kid. We were not allowed to visit the bathroom for the entire time.”

In the evening Philip was released but he must present himself for further interrogation in Jerusalem on Sunday. He is suspected of having attacked and pushed one of the soldiers.

“It’s preposterous, we have it all on film and Philip makes no resistance at all,”  said Gabbi Tynell, who also was present at the time of the arrest.

During similar demonstrations at the Eretz crossing in Gaza on Friday, the Palestinian activist Mahmoud Zakot, 20, was killed by live ammunition fired by Israeli forces. In Jerusalem, 34 demonstrators were arrested and several were taken to hospital.

The Israeli newspaper Haaretz recently published information on the Israeli ​​plans for future expansion of settlements. At present only 8% of the West Bank is controlled by the Palestinian Authority, while the rest is partially or fully under Israeli control. Settlements are the key to continued expansion of Israeli rule in the occupied territories.

The treatment of Palestinian residents of Jerusalem is in many ways a microcosm ofthe settlement, apartheid, and occupation of all of Palestine. Israeli practices there are geared towardseliminating any hope of Jerusalem as the capital of a future Palestinianstate. The demonstration represented only one stage in the ongoing struggle against the occupation. It will continue until Palestine is free.

Jeff and Jonas Weber is a volunteer with International Solidarity Movement (name has been changed). You can check out his blog here.