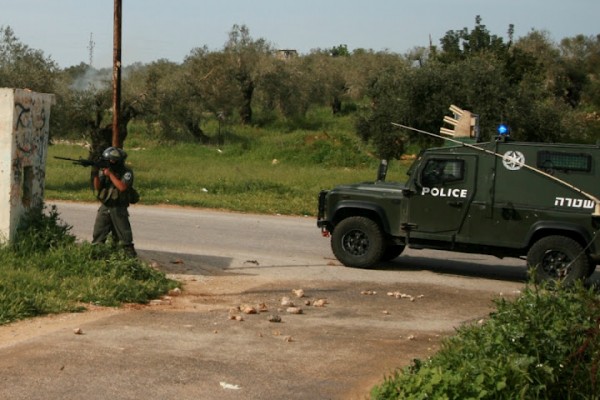 A nonviolent demonstration in the Palestinian village of Nabi Saleh last Friday, April 13th was met with Israeli army aggression, resulting in at least six injuries, including a sixteen-year old boy shot above the eye with a tear gas canister.

Following the Friday prayer the village’s residents, and several Israeli and international activists in solidarity, marched down their main road chanting slogans. Children lead the way at first, but ran back to their homes when the Israeli army came into view, anticipating the oncoming violence.

For at least five hours, the Israeli Occupation Forces (IOF) fired ample rounds of rubber-coated steel bullets, tear gas, and sound bombs at peaceful demonstrators, as well as between houses and at village residents not participating in the protest. They also employed the use of the ‘skunk truck’, which propels torrents of a sewage-like liquid, again not only on protesters, but on the village’s olive groves and homes.

Six people were injured due to rubber-coated bullets and tear gas fire. Sixteen year old Osama Tamimi was hit above the eye with a tear gas canister. The IOF delayed his ambulance for half an hour before letting it continue to hospital.

The village of Nabi Saleh has been holding weekly nonviolent protests demanding an end to Israeli colonialism and occupation. More specifically, the demonstrations are about the nearby illegal Israeli settlement of Halamish. Halamish was built on Palestinian owned land and continues to expand. Halamish and the 250 other Israeli colonies and outposts in the Palestinian West Bank, are considered illegal under international law as they violate Article 49 of the Fourth Geneva Convention, and the illegality has been confirmed by the International Court of Justice, the High Contracting Parties to the Fourth Geneva Convention, and the United Nations Security Council.

The weekly protests began after Halamish annexed Nabi Saleh’s fresh water springs in December 2009. Israel has since protected this theft with the use of military force.

Since Nabi Saleh began regular nonviolent demonstrations, Israel has brutally sought to repress them. The village faces collective punishments such as night raids and mass arrests. Israel has thus arrested more than 13% of the village, almost half of them under the age of 18 years. All but three were tried for participating in the protests.

Last December in Nabi Saleh, Mustafa Tamimi was shot and killed during the weekly protests. Despite these great risks, the village continues to zealously fight for their rights.

Rana Hamadeh is a volunteer with International Solidarity Movement.