Israel opens fire on protesters in Ni’lin: One youth injured by rubber-coated bullet 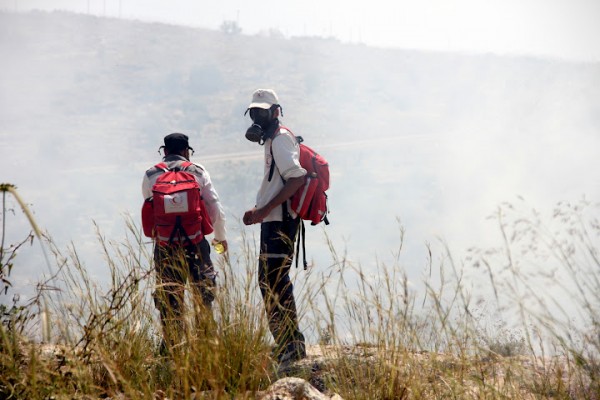 The weekly demonstration in Ni’lin on Friday April 20th was relatively quiet compared to previous weeks. Nevertheless, it showed again the disproportionate measures taken by Israeli occupation forces against the Palestinian resistance.

The Israeli army propelled skunk spray, tear gas, sound bombs, and rubber-coated steel bullets at protesters. Some of the Palestinian youth, or shabab, responded by throwing stones. One local youth masked with the flag of Palestine was pelted by a rubber-coated bullet, although did not suffer critical injuries. A local photographer was nearly struck in the face by a tear gas canister while attempting to take a closer photo of the Israeli soldiers.

As with each week, the demonstration in Ni’lin began after the midday prayer. It was a leaderless group of approximately thirty people including the shabab, internationals, members of the press, and medics. The protest began with the military deploying streams of skunk water over the Apartheid Wall at protesters including the half-dozen stone slinging youth. Approximately fifteen minutes into the demonstration, the first tear gas canister was launched, aimed at demonstrators near the valley. Moments later, volleys of tear gas canisters were launched over the Wall where the majority of the protesters were gathered.

The first victim of the initial tear gas shots was a local photographer. The canister struck the ground five feet away from him. Before he could run away, he began coughing severely and his eyes turned red. As the pain eased, however, he carried on as if nothing had happened, evidently accustomed to the sensation.

After another half-hour, much of the group slowly made their way towards the valley. As the concession merged in the valley, more tear gas canisters were shot. One medic was struck on his side by a canister but emerged with light injuries. Minutes later the silence was broken by the scream of a young Palestinian. He had been struck by a rubber-coated steel bullet. The medics immediately rushed to him and fortunately he was not seriously injured. The Israeli army continued firing rubber-coated bullets and tear gas canisters and the shabab replied with their stones.

When a local photographer approached the Wall to take photos of the Israeli soldiers, a tear gas canister was launched in his direction. It missed hitting his face by millimetres but there was no escaping the suffocation that ensued from the gas.

The demonstration came to an end shortly thereafter. As the shabab walked away, the rest of the group followed. The Israeli soldiers maintained their position securely behind the Apartheid Wall, while some of the demonstrators continued to suffer the after-effects of the tear gas.

Since 1967, the town of Ni’lin has been subject to land expropriation to an extreme extent. Following the Arab-Israeli war of 1967, a large part of Ni’lin was annexed to the nascent Israeli state. Over half of the town’s land has come under the control of Israel through the building of illegal settlements and the Apartheid Wall.

In 2004, Israel disclosed their intention to build the Apartheid Wall in Ni’lin, annexing much of their agricultural land. In 2008, the Israeli Supreme Court gave authorization for the wall to be built. The construction was initially blocked through legal procedures as well as popular non-violent demonstrations. These demonstrations were continuously suppressed through brutal measures taken by the Israeli government, including the killing of five innocent residents, curfews, random deployment of tear gas, and frequent night invasions by the army into homes, which inspired fear and humiliation for the families of Ni’lin. Two years later, the Wall was built. Although Israel claimed it was built in Ni’lin for ‘security purposes’, the Wall de facto annexed land from the villagers of Ni’lin for the profit of the nearby illegal Israeli settlement.

Every Friday the residents of Ni’lin continue to demonstrate and fight for what is rightfully theirs. The tear gas canisters, the sound bombs, the rubber-coated steel bullets, and the occasional live ammunition will never be enough to stop Ni’lin’s resilience. Even the Wall does not lie in portraying the statement that Ni’lin is “still going strong.”

Sonny is a volunteer with International Solidarity Movement (name has been changed).