by Robin and Leila 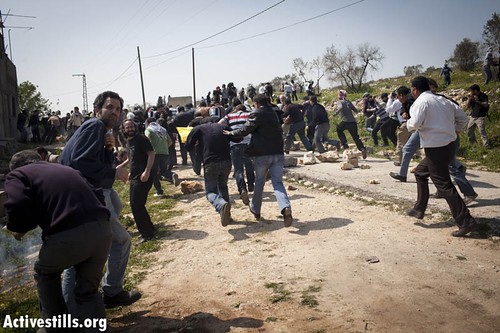 It was under a bright, sunny sky that the people of Kufr Qaddoum once again gathered to protest against the roadblock which isolates them from the rest of the West Bank. The past week there had been much frustration and anger since Murad Ashtawi, member of the Popular Committee, was arrested during last week’s demonstration. 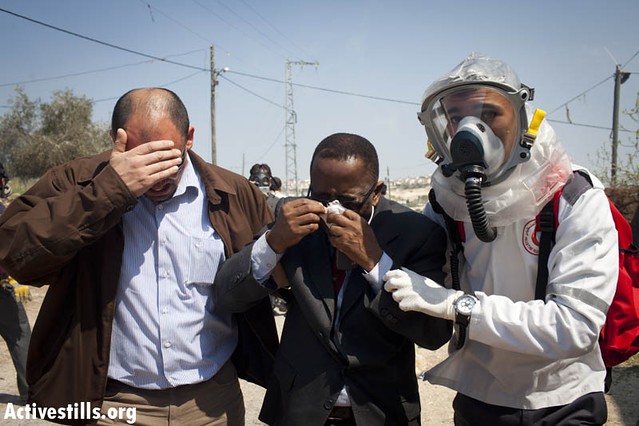 There was a great turnout of people today consisting of both Palestinians and internationals. Spirits were high as the demonstration moved towards the road block that cuts of Kufr Qaddoum from easy access to Nablus. Marchers were accompanied by music and cheering. When they reached the soldiers blocking the road there was dancing and speeches.

The soldiers immediately responded with excessive amounts of tear gas, which scattered the crowd and pushed the demonstration further back. The military then shot a significantly high amount of rancid smelling “skunk water” at the people and at the homes of Kufr Qaddoum as the skunk water truck entered the village.

Many people experienced an increased amount of tear gas today which resulted in several people suffering from tear gas inhalation and also being hit by flying canisters.

According to the Popular Struggle Coordination Committee,

A delegation of foreign diplomats visited Kufr Qaddoum, south of Nablus, after soldiers sicced a dog at one of the protesters last week, causing him serious harm. During the visit, several of the diplomats suffered from the effects of tear-gas, shot at protesters to disperse the demonstration. Jorge Lobo de Masquita, Representative of Portugal to the Palestinian Authority , as well as a South African diplomat were rushed to an ambulance, where they were given first aid for tear-gas inhalation.

Rubber coated steel-bullets and soundbombs were also used to harm the protesters. Mita, a French international activist, was hit by a canister fired at the crowd as she was running from the soldiers. The tear gas cannisterboth bruised and burned her lower calf.

Robin and Leila are volunteers with International Solidarity Movement (name has been changed).