Last Friday two people were injured and two arrested when the repression of the Israeli army came down on the regular demonstration at Kufr Qaddoum. Attack dogs were used to frighten and incapacitate protesters, besides the usual tear gas, sound bombs and skunk water. But the village is anticipating that this week’s demonstration will be even larger. 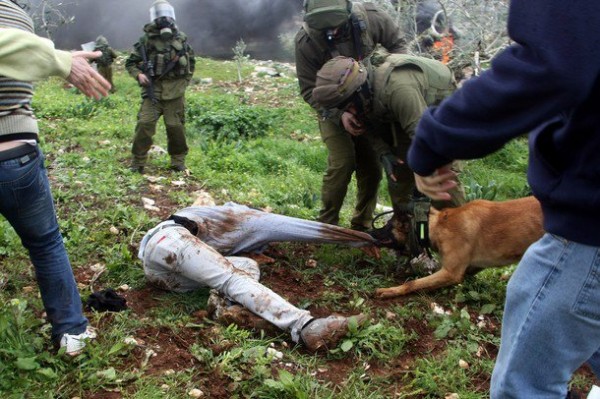 Ahmed Ashtawi’s worst nightmare came true this Friday at the demonstration against the roadblock that cripples Kufr Qaddoum’s access to the rest of the West Bank. The 23 year old traffic police officer, who works his station in Qalqiliya, has a phobia for dogs.

“What happened to Ahmed could have happened to any man in this town,” said Ahmed’s cousin, Mahmoud. “We thank God that it wasn’t worse and hope that he will be with us again at the next demonstration.”

He was attacked by one of the two attack dogs released by the Israeli border police. It was during the beginning of the demonstration, just as the soldiers had pushed the demonstration back with a heavy bombardment of teargas. One of the dogs got hold of Ahmed’s leg and he fell to the ground. When his friend tried to reach him the soldiers fired more tear gas to keep them away. The dog was allowed to keep biting Ahmed for almost 15 minutes while other protestors and international activists tried to free him.

“I saw that his pants were torn and bloody” sais Riad Ashtawi, one of Ahmed’s relatives who tried to reach him while he was on the ground being bit by the dog. “One of the soldiers carried a rifle with live ammunition, aiming it at me, so I was forced to hide behind a tree. When I looked out I saw how a soldier was about to fire towards my head with a tear gas canister from a few meters distance, so I dove for cover again and the canister hit my leg. As I laid on the ground, unable to move I could still hear Ahmed screaming.”

As Ahmed was on the ground with the dog still biting into his hand, his uncle Morad Ashtawi, one of the leaders of the demonstration, was able to reach him. When the soldiers saw Morad they sprayed his face with pepper spray and put him in handcuffs. The official statement of the Israeli army has been that Morad was trying to hit one of the soldiers.

In the video of the event that has been circulated on the internet since Friday, however you can clearly see that Morad poses no threat to the soldiers and that his only aim is to free his nephew from the dog.
“The soldiers have been out for Morad since the beginning of the protests” said Abu Moushab of the city council, who anticipates this weeks demonstration to be bigger and more forceful than last week’s. According to him many people who have seen the video of Murad being arrested are angry and upset.
Ahmed’s cousin reflected on the question of expectations for next week. Smiling and with laughter in his eyes, he declared,  “We are afraid of the dogs, so this Friday we will not come to the demonstration,” bursting with laughter. His humor was refreshing despite the gloom cast by the violent Israeli military.The organizers of the protest expect people to turn up from all over the West Bank for this week’s demonstration in Kufr Qaddoum. The video on Youtube of Ahmed being bitten and Morad being arrested have been viewed over 70,000 times.

Locals worry that their village son has not received care following the attack and his arrest by the Occupation forces. “We still don’t know if he has received any care for the injuries he sustained,” said Abu Moushab. “We have been in contact with his lawyer but they are unable to get any information.  All we know is that he was given first aid on site.”

Once the teeth of the dog had been pryed off of Ahmed’s hand he was arrested, accused of throwing stones towards the soldiers.

“This is what they do,” said Abu Moushab. “They accuse people of throwing stones to have an excuse to lock them up for months.”

Now the small village waits for Friday to get to voice their rage against what has happened.”Everyone who has seen the video is very angry, and we will continue the protests with more strength” said Mahmoud.
Jonas is a volunteer with International Solidarity Movement (name has been changed).
Arrests Demonstration Dogs attack Kafr Qaddum Roadblock 2012-03-21
Yara