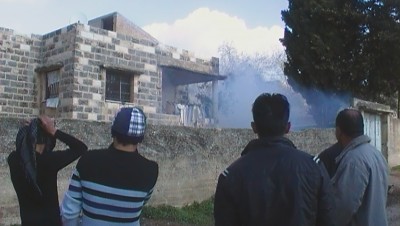 At noon on the 6th of January, 2012, a demonstration was held in the village Kufr Qaddoum, located just outside Nablus. The people gathered after the Friday-prayer and started marching along the main road that runs through the village. This road was, until the year of 2003, also the main road to Nablus, which by then only was a 10 minute drive away. This came to a short end during the second Intifada when the Israeli army decided to close the road as they considered it a safety risk to the nearby illegal settlements. The Israeli government has, since the end of the Intifada, agreed that the road is not a “safety risk” anymore and therefore gave the green-light to reopen it. The army however has so far disobeyed this decision and refuses to open the road which means that the villagers still have to take a detour of about 30 minutes, making the drive to Nablus three times longer and more expensive than before. 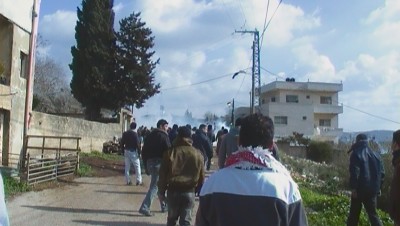 This denial by the army is the reason why today 150 – 200 Palestinians, accompanied by  internationals, marched in a peaceful demonstration towards the roadblock to show their dissatisfaction with the Israeli army and to reclaim their right to their road. When the demonstrators  approached the road-block they were met by about 15 armed soldiers standing on the road and approximately 5 more soldiers stationed on the hills next to the road. About 50 meters in front of the soldiers on the road they had placed barbed-wire. The soldiers spoke through a megaphone declaring that if anyone crossed the barbed-wire the demonstrators would be met by violence. Not one of the protesters crossed the line nor used any violence but simply tried to remove the barbed-wire when the soldiers began to fire teargas-canisters, forcing the protesters to run back towards the village. The protesters were then followed by a truck spraying them with “skunk-water” from a water canon as well as by soldiers attacking them with teargas and stun-grenades from the hillsides, as well as from the streets, and continued following the protesters deeper into the village. This violence continued throughout the demonstration, which lasted for about two hours. In the end the soldiers withdrew, and the Palestinians reached the road-block where they sang and cheered before they went back to the village, all the time watched by soldiers ready to take action from a hill closer to the nearby settlements.