The demand in Kufr Qaddoum for their main road to be reopened continues. Today’s demonstration exceeded the number of participants in the past few protests. Approximately 200 people joined together against this illegal street closure. Many of the supporters came from different parts of Palestine and the international community, from Bilin residents to an activist all the way from Norway. 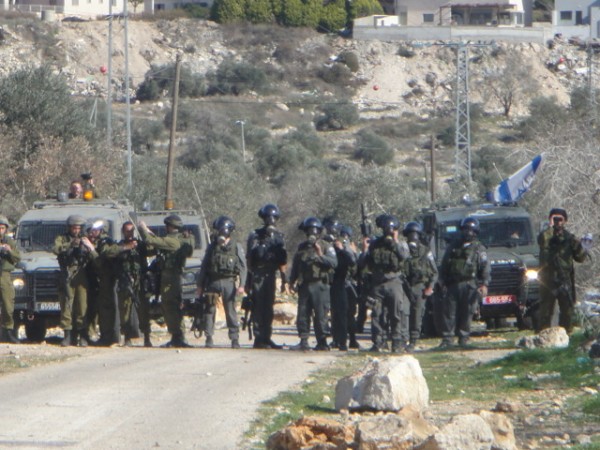 Kufr Qaddoum is finally starting to receive the exposure it needs in order to get its story out to the public and the world.

Unfortunately, this did not stop the Israeli Occupation Soldiers from their pattern of increased violence during demonstrations. The majority of the tear gas canisters used today were aimed either directly into crowds or at specific individuals. It is illegal to use tear gas as a fatal weapon rather than for dispersion. There were many close instances of potential serious injuries due to these canisters being shot as physical contact weapons. To make the possibility of serious injuries greater, the soldiers positioned themselves on the roof of a house, which gave them a clearer view of their human targets. There was no regard for the people that live in this house as the soldiers occupied the top of it.

Besides shooting tear gas canisters directly at protesters, the soldiers spent a lot of time taking pictures of the participants. Pictures taken by soldiers have been used many times to imprison participates of these unarmed protests.  The Israeli Occupation Forces have many methods to diminish any resistance such as imprisonment and fatal injuries. These are the risks that protesters accept with the hope that one day their people will be free.