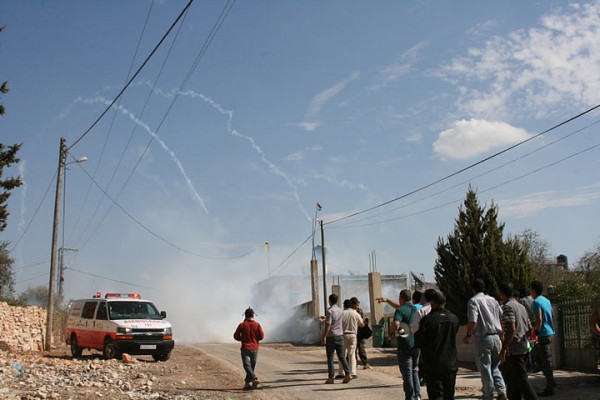 Soldiers fired teargas directly into crowd at peaceful protesters in Kufr Qaddoum. Internationals and Palestinians, including children, were gathered behind barbed wire that runs across their main road, and were not advancing when soldiers began to fire around ten canisters of tear gas at once from a short distance. Two protesters were injured while escaping tear gas, including one international woman, and many suffered from tear gas inhalation. They continued to shoot tear gas at the approximately 100 protesters for over an hour. Many civilians from the village were affected by the perpetual firing of tear gas.

Protesters were holding signs calling on the International community not to support Illegal Israeli settlements when the tear gas began from a distance of only 25 metres. A Swedish International activist was not expecting such an assault on un-advancing protesters.

“It was my first time at a protest here and I was shocked that they would fire tear gas directly at a peaceful crowd with children visibly among them.” She fell while escaping the surrounding tear gas. “I was blinded by the smoke and I fell on rocks.

Two Palestinian men picked me up and when we escaped from the gas I was covered in blood.”

When she tripped, her hand broke her fall, but was cut on the palm, requiring her to go to the hospital and receive three stitches.

The protest, held by the Popular Committee of Kufr Qaddoum, was protesting the closure of their main road, which up until 2003 had been the mean ways of transportation from Kufr Qaddoum to Nablus. The original journey of 15 minutes now takes 40 minutes by an indirect road. The Expenses to the 3500 Palestinian inhabitants have increased significantly as a result, particularly for the many students of the village who study daily in Nablus. Two Palestinians have died in the past few years, after not reaching the hospital in time for treatment.

This is the 18th protest in a row that Kufr Qaddoum has held on Fridays, after more than six years of no protests  while the village was involved with legal arguments with the Israeli Court. Finally, the court ruled that they could use the road again, but that the road is not “suitable” for transportation. It was closed. The road passes the illegal Israeli settlement of Qadumim. Israel has a thorough history of closing, to Palestinian cars, roads which pass settlements.

Weekly, soldiers have responded to the unarmed protesters by firing tear gas, rubber-coated steel bullets, and sound bombs on civilians. Often the soldiers have entered the village, firing in between houses with families within them and seriously affecting the lives of civilians.

More than half of the villagers’ land, approximately 11,800 dunams, are situated in area C which means that the Palestinians need permission to work there from the Israeli District Coordinating Office. Last week, following the protest, the Israeli military revoked the permission they had previously given the village for the following weekend.

Rana H is an activist with International Solidarity Movement.