New
Home / Features / Ashraf Abu Rahmah was arrested for being himself

Ashraf Abu Rahmah was arrested for being himself

To some soldiers of the Israeli army, staying alone, being quiet, and carrying a flag is a crime. To them, people who act in that way should be arrested. At least we can come to that conclusion when we think about the arrest of Ashraf Abu Rahmah, from Bil’in village, who was arrested on Friday, October 21.

The demonstration had not yet finished when the Israeli soldiers, in four jeeps, went into the village. It was a surprise to everyone, but not an unexpected act, because Israeli incursions into Palestinian villages is something regular. The surprise comes because people were going home, far from the place of the demonstration. Ashraf was arrested just on his way home.

He was charged with throwing stones, but he did not throw anything not at the time he was arrested, nor during demonstration itself. He just stood with his Palestinian flag, talking to friends, looking at the bombs that were thrown, running away from the gas, sometimes coming close to the barbed wire which rolls through Palestinian land.

The ISM volunteers can testify that Ashraf did not throw stones at any moment. But he will be dragged to court tomorrow under that charge. Journalists and friends will take photos with them to prove that he wasn’t throwing stones.

Last Friday’s demonstration was one of the most violent ones in recent times in Bil’in. When the Palestinian, Israeli, and foreigner activists came near the wall, the soldiers began to throw tear gas without pausing. The park which is being built by the villagers on the lands Israel was obligated to give back, lands it had stolen after a decision by the Israeli Supreme Court in 2007, was full of gas and dust for a long time. 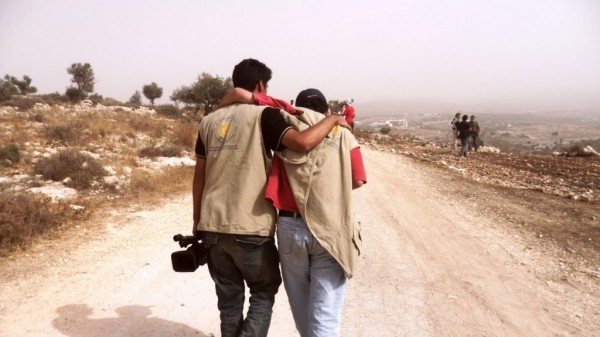 People who were on the top of the hill, far from the valley where the confrontation took place, also suffered from the burning smoke. Some cases of asphyxia were registered because of the gas inhalation, and the flames in brush and olive groves decorated the sky. Some of them became great fires, the trees and other plants.

To the economical life of villagers, it means a great loss, because the economic basis of Bil’in is agricultural, like the majority of Palestine’s villages. And to some, Ashraf being taken away on false charges by an occupying power can in some way be labeled as a loss. Yet the trees and plants and landscape that are Palestine, they can be replanted  to grow a new future. That is the nature of Palestine. Ashraf will grow back in Bil’in. In shrub, tree, or voice , peaceful resistance will continue to grow from the root that is Palestine.