On Thursday 28th of August, at around 11am Israeli soldiers invaded the town of Ni’lin, occupying the clinic and shooting tear gas at children who were walking home from school. 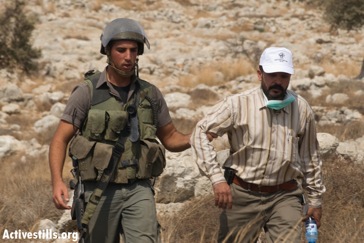 This invoked a reaction from some Palestinian youth from within the town who began to throw rocks back at the soldiers. Soon after, the soldiers fired a tear gas canister breaking a window of a house and gassing a mother and her baby inside the room severely. After this, the Israeli soldiers began to push further into the town coming close to its main square, shooting tear gas into the main square and to the houses beyond it. The soldiers then began to fire rubber-coated steel bullets at the Palestinians hitting one man aged 38, in the chest, who was working near the clinic. The man was hospitalised by his injuries. 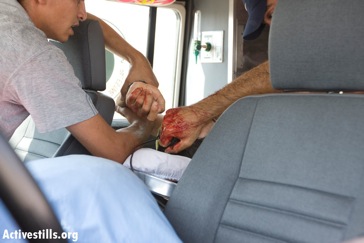 The demonstration, scheduled for 2pm was delayed slightly by the situation within the town, but began at 2:45pm. Numbers in the demonstration were reduced by the presence of the Israeli army inside the town, but there were around 50 demonstrators present. The demonstration began by walking through olive trees towards the site where bulldozers are preparing the wall to be built. When protesters reached halfway between the bulldozer and the town, army from in front and behind began to fire tear gas at them. At the same time the army fired four tear gas canisters into a family’s tent. This caused a huge amount of distress to the persons inside, aggravated by the fact that there were many children and a pregnant woman in the tents at the time. One child aged 4 and the pregnant woman aged 24 who breathed in a lot of tear gas were taken to the clinic. The pregnant woman lost consciousness from the tear gas and had to be carried into a car to take her to the clinic. The doctor in the clinic said that while inside the clinic she regained consciousness, but had suffered shock and didn’t speak all day. The demonstration ended with the protestors leaving via a road away from the soldiers, while being shot at with gas canisters. However, two Palestinians and one Israeli were caught by the border police and detained. One of the Palestinians was a 15 year old boy from Ni’lin filming for B’Tselem – the brother of Salaam, the girl who filmed the notorious video of Ashraf Abu Rahme being shot while bound by the Israeli army. 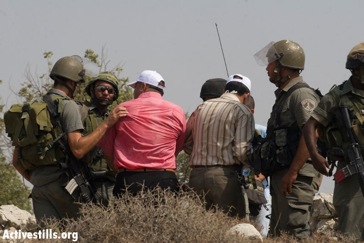 During the demonstration inside the town two boys had been shot by rubber coated steel bullets. One who was aged 13 had been tear gassed inside his house forcing him onto the street, where he was shot from close range into his leg. The bullet broke the bottom part of his leg. The other was an 18 year old boy who was hit in the upper leg causing bruising. 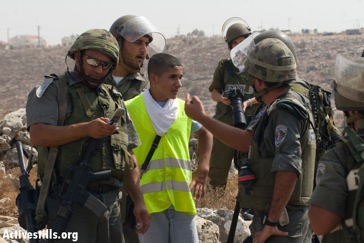 After the demonstration the army were still occupying most of the north side of the town, and were firing close to the main square. During this time the army shot a boy aged 13 in the head with a rubber coated steel bullet. The bullet caused his head to bleed a lot and he was taken to hospital. The army left the town at 4:30. 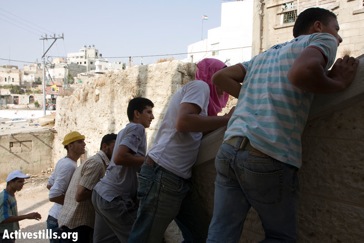 This type of scene is a regular occurrence in Ni’lin with demonstrations against the apartheid wall which, when built will steal 50% of Ni’lin’s remaining farm land. In addition to this, the wall, alongisde the creation of a tunnel which will be the only route into Ni’lin and will be closed daily at 7pm by the Israeli army, will make life impossble for many inside Ni’lin. For example, the ability for students to study outside Ni’lin, ability for workers to work outside Ni’lin, and trade between the villages in the region will all be made very dificult. The affect of this will be that many residents of Ni’lin will be forced to move away to find work and life somewhere else.