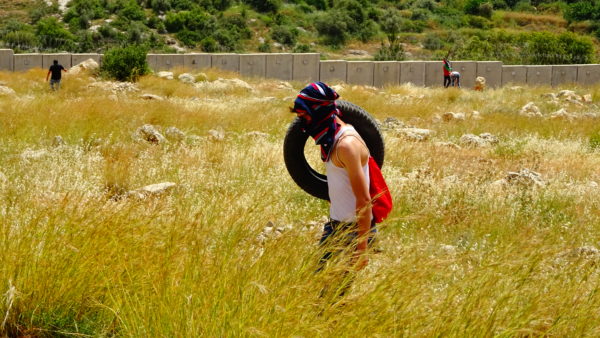 On April 21st a crowd of Palestinian protesters, joined by international and Israeli activists, gathered for the weekly demonstration in Ni’lin. The peaceful demonstration began after Friday prayer, with the protesters marching to the Apartheid Wall built at the expense of hundreds of dunums of what once was the town’s farmland.

Local demonstrators set fire to tyres along the wall and waved Palestinians flags, while one was dressed as a Palestinian prisoner, a clear nod to the Palestinian Prisoners’ week of action and a show of solidarity with the hunger-striking prisoners.

Israeli forces stationed close to the wall did not respond but, similarly to what had happened the previous week, some soldiers were already hiding among the olive groves and in the mountains next to the village, surrounding the protesters and forcing them to run back into the village, not long after the demonstration started. 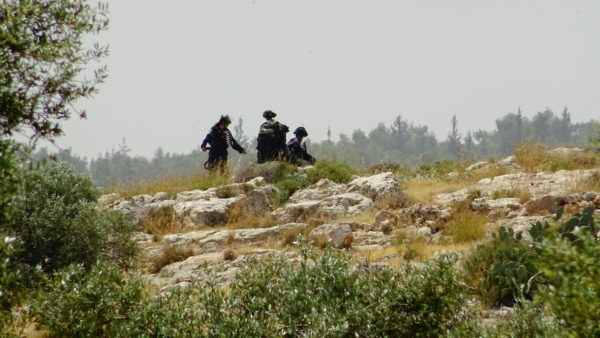 This week’s protest was the first one after Muhammad Amira, also known as Abu Nasser, was shot with a rubber-coated steel bullet on his head and then arrested under the claim that he was throwing stones. Soldiers prevented Palestinians, and even the paramedics stationed at the local from approaching him. Amira is a prominent activist from Ni’lin and has been the one leading the popular protests there since 2007. He’s currently under detention, Israel has yet to press charges against him.