Member of the Popular Committee in Ni’lin arrested during demonstration

More than 100 villagers from Ni´lin, together with international and Israeli activists, marched towards the nearby settlements that unlawfully separates the village in two.

The peaceful demonstrators were intercepted at the entrance to the village by the Israeli army who used excessive force to drive them back. They fired teargas, stun bombs and rubber bullets into the crowd on sight with no provocation 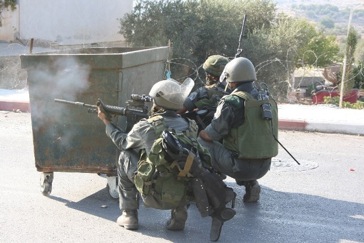 Five demonstrators were injured, including one Swedish international solidarity activist who was shot by a teargas canister fired as a projectile missile causing deep burns. Others were hit by rubber bullets and one man, Salah Mohammad Al Khawaja was injured, arrested and then taken by the Israeli authorities. Al Khwaja is one of the leaders of the Committee Against the Wall in Ni’lin. The Israeli army has said that they will arrest him once he is released from the hospital even though he was a mere bystander and did nothing to warrant being arrested. 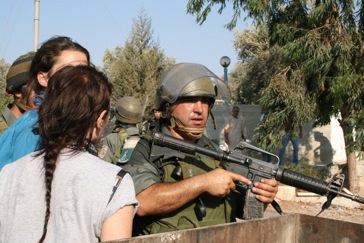 Despite the peaceful nature of the protest, the Israeli army and border police, numbering more than fifty, pursued the dispersed demonstrators into the village and continued to shoot at locals with rubber bullets for several hours after the cessation of the demonstration. Several homes and cars were battered and had windows broken during the ensuing clash between the Israeli occupation force and resistant locals. Today’s episode is another example in a protracted confrontation between locals who are fighting to keep their land intact and the Israeli government who have been using increasingly violent means to quell protest and ensure the continued building of the illegal occupation wall.