Bil’in Unites in Solidarity With Gaza 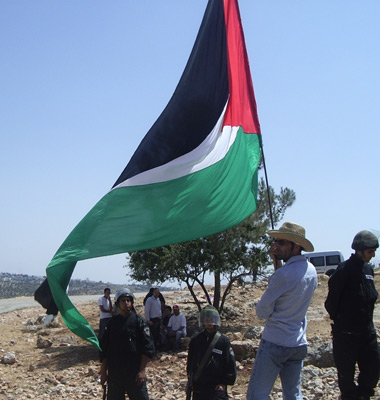 Yet again, the people of Bil’in were joined in solidarity by international and Israeli peace activists on a Friday afternoon after midday prayers to protest the annexation of the village’s land by the illegal Apartheid Wall. The Israeli presence here is constant, and there is a camaraderie among the people here, sharing together a comfort that is almost surreal considering what we are about to face.

We gathered in front of the house where a few Internationals are staying, and made our way to the metal gate in front of the Wall where 2 hummers full of Israeli Border Police with guns and cameras were waiting. They knew to expect us and it was another Friday demo for those who participate weekly.
The theme of this Friday’s demonstration was the massacre on the Gaza sea shore where 7 members of the Ralia family were murdered by Israeli artillery fire. The demonstrators carried 7 mock open coffins to symbolize them and made a mock grave in front of the wall. 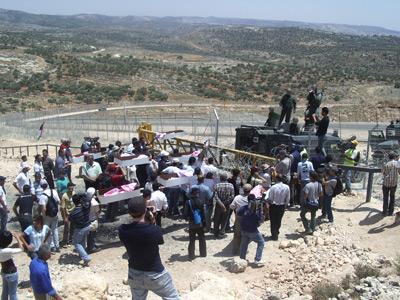 It was obvious today how the border police were there just to beat people. Everybody was committed to getting past the wall. We walked together down the road, and had a relatively quiet demo until the soldiers responded to a couple of stones thrown by the children. You have to understand that a stone, no matter how well thrown, is no match for the guns, sound bombs and tear gas which were the response from the soldiers. The mock graves were still successfully laid side by side next to the barrier. 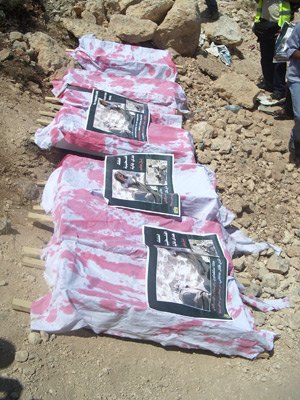 A couple of people even managed to get amongst the Border Police jeeps and at times it seemed that they didn’t quite know what to do with such determined people. Nevertheless, they threw five or six sound bombs, one of which lightly injured Palestinian ISM activist Mohammad Mansour. 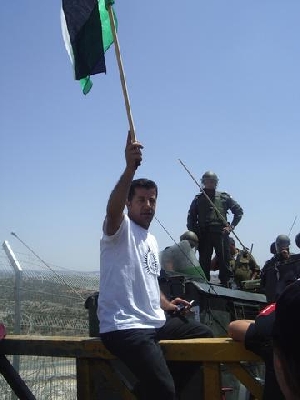 They also engaged in indiscriminate beating and shoving of protestors, including women and children, when they refused to move back. 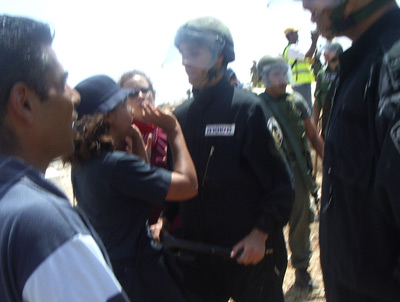 A bunch of people responded by sitting down where they were and chanting. Some of them were forcibly picked up and manhandled by the soldiers. 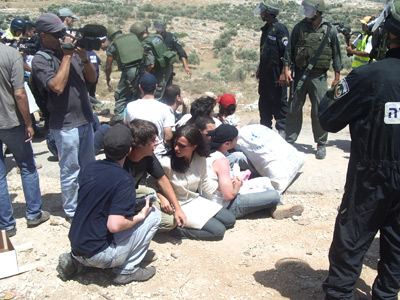 A young man from the village received a rubber bullet in the side of his torso. As they have been doing in the past few weeks, after the protest was called off and people started to walk back to the village, the soldiers started firing tear gas cannisters at us. It seemed that they wanted to punish us for demonstrating, but an Israeli peace activist gave a more banal explanation: they need to expend all the tear gas earmarked in their budget for each demonstration otherwise it will appear later as if they weren’t doing their job properly! Overall though, the protest lasted longer and was a lot less violent than the protests of the past few Fridays.

I’ll quote what Mohammad said to me later: we are doing this for the Israeli children as much as for anyone else, so that they can play and swim together with our kids as one in the future, without thinking who is Muslim, Christian, Jewish, Arab or Israeli. It’s a simplistic thought but still a nice one to keep in the back of your mind when you’re here as an activist to remind yourself, in stressful situations, why you came here.