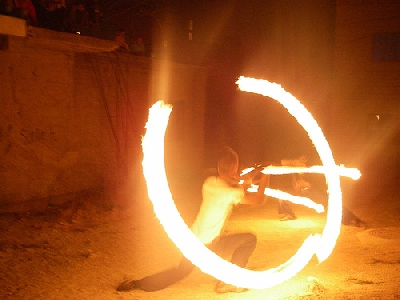 Today, during the daytime, we were sitting near some Border Police. Sometimes they like to joke and be friendly with us. What follows actually happened: one of them TOOK OFF his helmet, flak jacket and gun, put them down next to us and started doing back flips and no handed cartwheels in front of us. He was showing off and it was quite amusing. He would have been in so much trouble if his commander had seen his gun laying on the ground!

There’s a new volunteer here from San Francisco. We know some of the same people and he also spins fire. We were able to put that to good use today in terms of nonviolent resistance.

We told the people in the neighborhood that we were going to give a fire performance tonight. During the day we practiced while out monitoring the streets.

At one point we were walking past the checkpoint, an often problematic area, and we noticed about 6 border police, including the guy who had done back flips and cartwheels for us earlier, detaining and mistreating to 5 Palestinian men who were our neighbors. There were about 6 adult settlers hanging around and we figured the border police were acting like this because the settlers had urged them to.

Anyhow, we decided to try to deescalate the situation with these border police at the checkpoint by being clowns.

My friend took out his juggling pins and I took out my fire chains. I announced to everyone present that there was now going to be a circus performance. So he started juggling and I started spinning the poi. We were being a little bit silly and ridiculous. After about 5 minutes we bowed and the Palestinians and one or two of the border police clapped. The settlers didn’t! But it seemed that everyone had lightened up and after about 5 minutes the police let the men go. 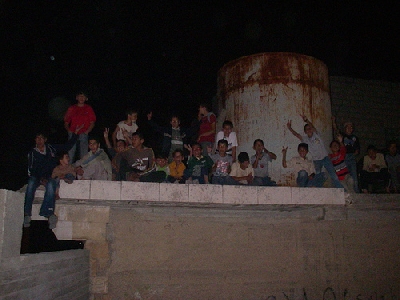 We stayed there for awhile longer because soon after, a new group of Palestinian men were detained and we did our routine again and they were only detained for maybe 15 minutes or so which is pretty good.

When it got dark, we lit our fire chains and did a performance for our neighbors. I have never had such an enthusiastic audience! 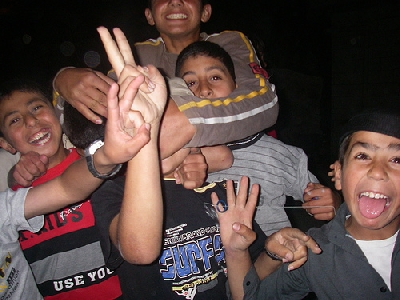 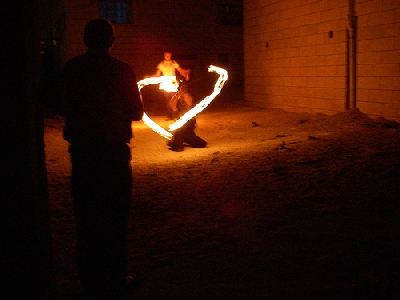