On 6th December Israeli occupation forces (IOF) confiscated two tents, which were being used as a school in Isfey al Fauqa, a village situated within the region of Masafer Yatta in the South Hebron Hills. Israeli forces – with tear gas canisters at the ready – also destroyed a toilet which had been donated to the community by international NGOs. They used sound bombs to disperse the local residents – including schoolchildren – in the process.
A bulldozer manufactured by British company JCB, and a crane manufactured by Italian company Fassi were used in the demolition. There have been calls for action by the Palestinian movement for Boycott, Divestment and Sanctions against the international companies complicit in these demolitions. 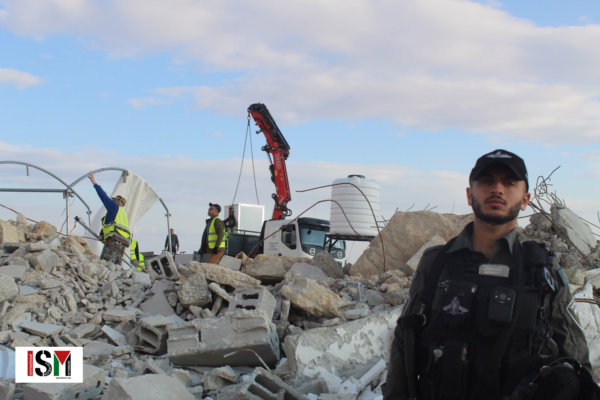 This is the second time in two weeks that the IOF has demolished the newly opened school at Isfey Al Fauqa. On 23rd November the IOF destroyed the previous school buildings. On that occasion soldiers also used sound bombs against local residents.
Solidarity visit

We visited Isfey al Fauqa school the day before the second demolition took place. Local residents told us that the school had been established to provide education for 22 students – from the villages of Isfey al Fauqa, Isfey al Tahte, Tuba and Musa Zain – who would otherwise have to walk at least 4km over the mountains to get to school.

The day before the demolition happened we played games with the kids inside the tents and helped to paint a mural on the rubble. One young boy told us “I love my school”, and a little girl sang a popular song to us over and over again. Some of the words she sang translate like this:

“You will find me on my land
I belong to my people, I sacrifice my soul for them
My blood is Palestinian”

Local residents told us that they would build their school again.
What’s the context:
The communities of Masafer Yatta have been under more and more intense pressure since May 2022, when the Israeli High Court ruled that there was nothing to prevent Israeli forces from expelling Palestinian residents from the area. This has resulted in increasing violence and harrassment from the Israeli Occupation Forces.
All twelve communities in Masafer Yatta – which are home to 2,800 people – are under threat of expulsion.
Local people have been fighting to remain in Masafer Yatta since the Israeli army established a firing zone there in the 1980s, in contravention of international law.
Now, the residents of the nearby village of Khallat al Dabbaa – just a few kilometres from Isfey al Fauqa – are preparing to resist against expulsion they are calling for international support. Please do not forget these communities, contact us if you can come to join their struggle here in Palestine, and check out the Save Masaffer Yatta website.
“This will be a school again”
Soon after the confiscation, new tents were brought to Isfey al Fauqa, so that the residents could continue in their struggle for their children’s education. One local resident told us that “no matter how many times they demolish our school, we will rebuild it again and again”. 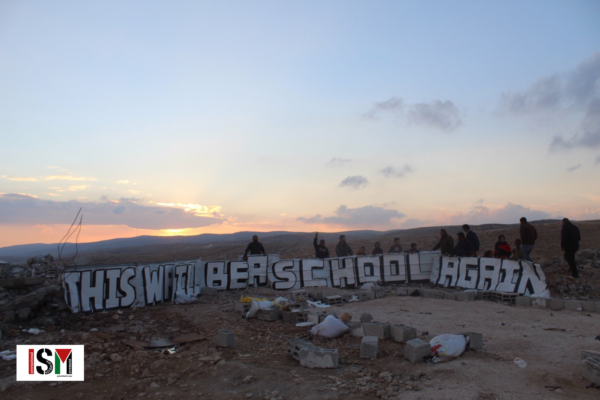