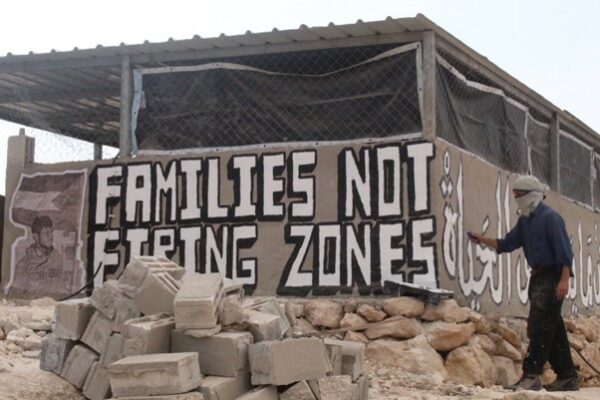 For the last 42 years the Israeli occupation forces have been slowly but surely grinding the region of Masafer Yatta into dust. Now, in 2022, the various injunctions, petitions, hearings and a halfhearted international condemnation have amounted to nothing. The Israeli army has again successfully pushed through their application to forcibly transfer some 1,200 Palestinians to make way for a military firing zone. This is ethnic cleansing happening before our eyes.

At the gates to the valley lies the village of Khallat Al Dabaa, a well established resilient community. Persistent and violent Settler attacks, deliberate police negligence, military harassment, and the imminent threat of eviction makes life here increasingly difficult. A large portion of the Masafer Yatta valley has been designated a live firing range for military training dispute the existing residents. This is means displacing and demolishing the homes of 215 Palestinian households that have lived in these hills for generations, now under constant threat of eviction. In Khallat Al Dabaa, 20 structures have received demolition orders. The order demands that they personally destroy their own homes. Adding salt to the wound The residents had until the 29th of September and as they did not comply they will be charged for the cost of demolition. All the while the military training persists. Dropping bombs and firing live ammunition. Demolition and violence has been the only certainty for the communities of Masafer Yatta. 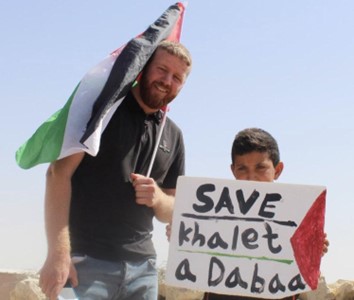 The Aldababseh brothers Jeber, father of five, Mohammed, father of twelve, and Amer, father of four, have  had their homes demolished five times each  over the past four years by the Israeli occupation forces. The vital school, the generators, the water pipes and five wells were also destroyed. Water pipes now have to be hidden from the army and settlers. Jeber said to ISM: “If they demolish everything we will rebuild, we have nowhere else to go. This is our home and this will be our grave.” 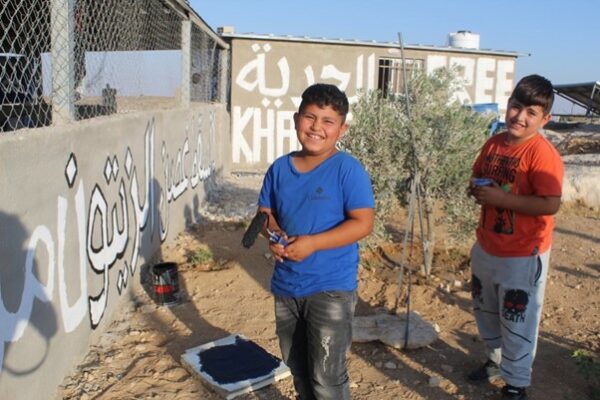 In a show of defiance from the local community and the activists on the ground, The ISM, together with the families of Khallet Al Dabaa has been painting large bold clear statements on the walls of the houses. Statements asking questions such as: “Where will I sleep”, “where will they stop”.
One statement reads “this is a home just like yours”. This is aimed directly at internationals asking them to draw a parallel with the situation here and their own lives. Your home is somewhere you will thrive in, sleep in, raise your family and somewhere you should feel safe. We want the international community to question what lengths they might go to protect their own home. This writing is not for the Israeli soldiers who come here for “military training”. The apartheid soldiers come here to evict, demolish and terrorise the community. It is unrealistic to think that this work will stop them in their tracks. This work is here to highlighting the human cost of this forcible transfer and raise international awareness. It’s is a call to action. The time is now. We must support these communities before they are eradicated. You can do this by either joining us on the ground here or from afar sharing and circulating as much information as you can. Solidarity can come in many forms.
In clear bold black and white text one statement reads: “LET ME LIVE MY LIFE” this has proven to be a daily challenge here and across the West Bank. We know this will contribute to a better appreciation of this urgent situation. 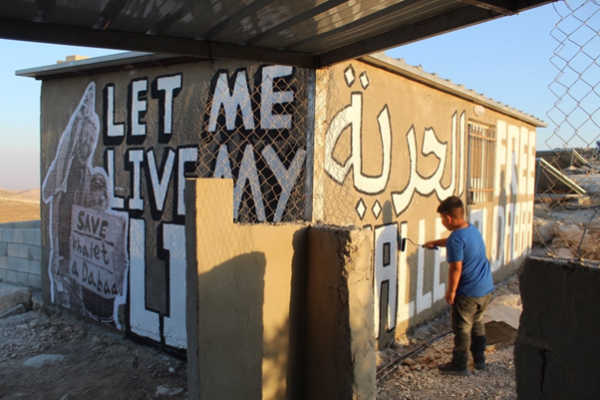 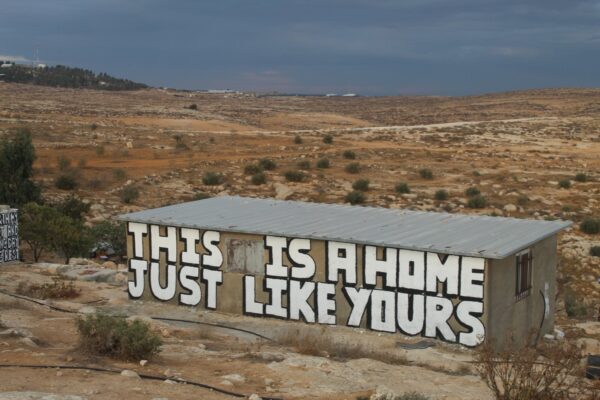 Making a stand and saving the village of Khalat Al Dabaa is specifically essential because Israel’s brutal occupation will not stop here. The local resistance committees and the ISM activists on the ground have resolved to do everything they can to help these communities survive this ordeal. If this village goes, it paves the way for the rest of the Masafer Yatta valley and the West Bank to be erased from the map.

Mahmoud Darwish sums up why the people stay, and how they have the strength to resist.

We have on this land that which makes life worth living.