Yesterday in Tel Rumeida, the afternoon before Eid, settlers attacked an elderly Palestinian couple as they walked home. International activists in the area attempted to document the abuse. The soldiers were not protecting the Palestinians. They were allowing the actions of the violent settlers.

The soldiers instructed the activists to step away and stop filming. As the five international activists walked away, a settler pushed his young son into a 20-year-old British man, who was immediately pushed from behind to the ground and handcuffed by Israeli soldiers. When asked about his treatment, he stated that he had been placed in a chokehold whilst being dragged up the street, with his cable-tie being too tight for IOF soldiers to remove easily, causing his hands to swell and leaving red marks on his wrists that lasted for the rest of the day. Settlers were encouraging the aggression. They snatched the phones of two of the activists, when they asked for them back, the two 25-year-old British women were detained by border police and taken to Kiryat Arba police station. A fourth American activist had her phone stolen by Israeli settlers and thrown over a wall, and was also arrested at the scene. These four international activists were detained for four hours.

As you can see in the video, a Palestinian man was also handcuffed and taken away, despite not engaging illegally or provocatively.

A fifth international activist was stalked by a settler who verbally abused her along with Badee, founder of Human Rights Defenders. She called them terrorists whilst again, the army did nothing to help the situation. The soldiers ignored violations of Palestinians’ and activists’ fundamental human rights, made to stand in the sweltering heat being verbally and physically abused as some sort of collective punishment for simply trying to walk to their homes in the occupied Hebron. Soldiers threatened to arrest Badee if he didn’t stand at a particular point on the pavement that they arbitrarily had designated him.

The house that you see at the end of the video was vandalised. Hebrew signs were left overnight threatening Abu Awani. He visited the police station to make a complaint this morning but was turned away. Tensions remain high in Tel Rumeida with Palestinians’ freedom of movement restricted and right to life threatened. 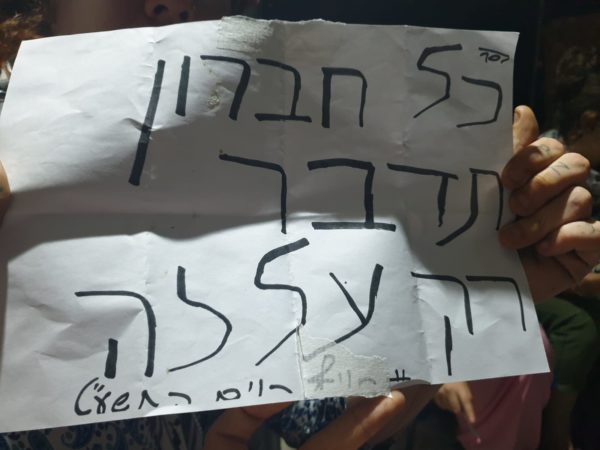 The HRDA have released a statement regarding the threat:

“The activist Badee Dwaik said that Imad Abu Shamsya noticed the presence of slogans on cartons on the roof of Imad’s house on Friday morning threatening him with death and a group of Palestinian and foreign activists went to Imad Abu Shamsia’s house to declare their solidarity with him and to denounce the policy of threats against Imad and many activists Human Rights Defenders as a group of settlers returned at 3 am on the roof of Abu Shamsiya and we went to the occupation police station to file a complaint about the issue at 1:30 am, but the Israeli police asked to leave the place and remove it after 4 pm. This is the termination period.

The Defenders’ Association held the Israeli occupation authorities fully responsible for the incident, since the activist Imad lives in the area under full Israeli security responsibility. The Defenders’ Association appealed to international and local institutions to provide protection for the activist Imad Abu Shamsieh and all activists of the Human Rights Coalition. It discourages activists from stopping by their duty to protect their people and expose the crimes of the occupation by documenting the camera.

It should be recalled that Imad Abu Shamsiah documented the assassination of martyr Abdel Fattah al-Sharif in March 2016 by the criminal soldier Alor Azzaro in Hebron.”