Israeli soldiers shot and killed a Palestinian in Al-Khalil (Hebron) on Tuesday while attempting to distribute legal court documents. The Palestinian man was identified as 36-year-old Yasser Fawzi Shweiki. 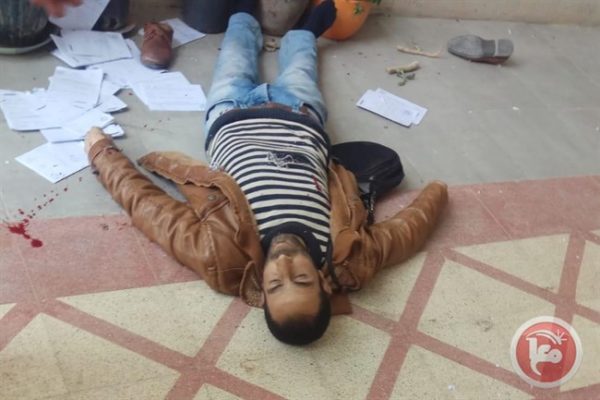 After the shooting, Shweiki’s body was dragged into the Rajabi House. The army further prevented Palestinian Red Crescent Society’s medics from entering the scene to treat Shweiki.

Human rights workers were attacked by Israeli Police and arrested immediately after arriving on the scene.

The shooting occurred outside the Rajabi House (also called Beit HaMeriva or House of Contention by Israeli press; the Peace House, Beit HaShalom, or בית השלום‎ by Israeli settlers)–which was first occupied by illegal settlers in 2007.

In December 2008, the illegal settlers were forcibly removed from the Rajabi house following a Supreme Court order finding that the settlers submitted “large-scale forgeries of many documents” to the courts. In response to the ruling, Baruch Marzel (ברוך מרזל) (former spokesman for the terrorist organization Jewish Defense League and resident of Hebron) told Ynet “We must go to war.”

Settler violence followed, setting fire to Palestinian fields, olive groves, homes, shops, and cars. At least 2 Palestinians were shot by settlers, including Hosni Abu Saither–shot in the chest at point-blank range on December 4th, 2008. B’Tselem published a video of the shooting:

Israel claims that Shweiki had a knife when he was shot on Tuesday.

Ofer Yohana (עופר אוחנה)–the infamously violent settler that was caught on video in 2016 kicking a knife towards the body of Abdel Fattah al-Sharif after he was shot by Israeli soldier Elor Azaria (אלאור אזריה)–was on the scene of Shweiki’s shooting on Tuesday; he can be seen attempting to stop the filming of the human rights workers’s camera in the first video above.