Anat Cohen (ענת כהן), daughter of the convicted Israeli terrorist Moshe Zar, attacked another international who was observing schoolchildren on their commute to the Qurtuba school this morning.

The International was an elderly woman who was keeping tally in a notebook of the number of schoolchildren that passed through the checkpoint and how many were harassed by illegal settlers or the israeli occupation forces. These numbers are submitted to UNSECO and Save the Children.

Cohen suddenly appeared and, before ISM volunteers could start recording video, she punched the woman in the ribs and began scolding her. ISM caught the rest of the exchange on video, when Cohen stole the observer’s notebook:

The observer complained to the police–who retrieved the notebook from Cohen–and then the police proceeded to evict the observers (including ISM volunteers) out of H2, claiming that the school and its surroundings were a “Closed Military Zone.” 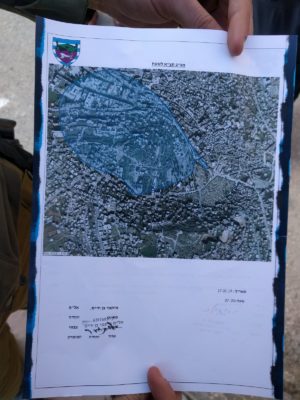 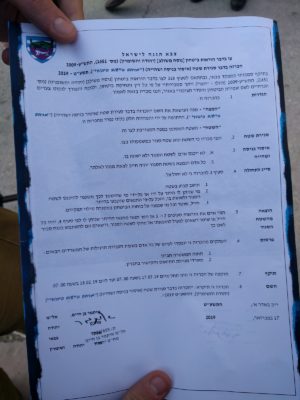 The above document presented by the israeli occupation forces to the international observers shows that the order was created just 30 minutes before they were told to leave.

Creating closed military zones is a common tactic used by Israel to thwart international observers from being able to monitor for the illegal settler’s and soldier’s crimes against the Palestine people. In this case, Palestinian children.