Two years ago Dima al-Wawi woke up for school feeling sick. Her throat hurt and her lymph nodes were swollen. Her parents were already out of the house, on their land that is split in two by the illegal settlement Karmi Zur in Halhul outside of al Khalil / Hebron. 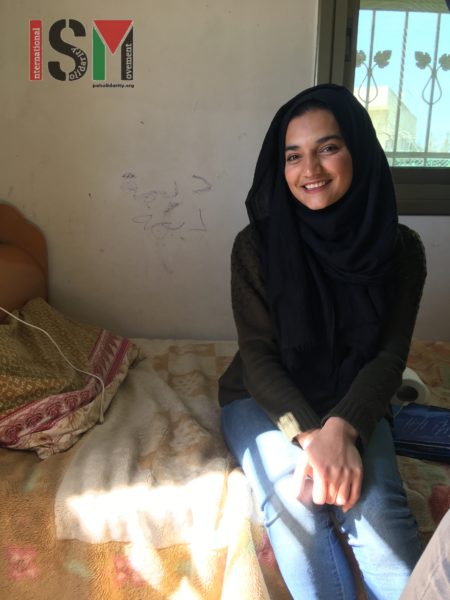 Dima al-Wawi, present day, in her room in Halhul

Dima’s parents have faced many problems with settlers from this illegal settlement who tried ceaselessly to prevent them from entering their land through the main checkpoint. They took their case to Israeli court and miraculously won access through the checkpoint to both sides of their land sandwiched between the illegal settlement on the East and West side of the Al Wawi’s land. The family remained cautious due to settler harassment and thought that only the adults of the family should enter through the checkpoint as violence is always inevitable.

Dima, 12-years-old at the time, didn’t think so cautiously that morning innocently wanting her mother to take her to the doctor. This day would be the first time she attempted going through the checkpoint onto her own family’s land.

Immediately Israeli soldiers and border police accosted her, blindfolding and handcuffing her behind the back (an action deemed illegal under international law). At 8 a.m., the soldiers shoved her to the ground and commenced beating her and kicked her in the back. Dima was then taken to the police station in Kiryat Arba, another illegal settlement in al Khalil/Hebron. 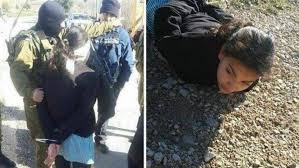 12-year-old Dima on the day of her arrest

Scared, confused and traumatized, Dima remained calm thinking she would be released that evening since she had done nothing criminal. Through several hours of questioning, her interrogators never asked her if she would like to phone a lawyer. Since the subject of a lawyer never came up, she didn’t know to ask for one unaware of her rights. In the end, she was given a four-month sentence and carted off to notorious Hasharone Prison in between Haifa & Tel Aviv on the charges of carrying a knife. It is worth noting that this act is also illegal under international law to transfer an occupied person from the West Bank into Israel. 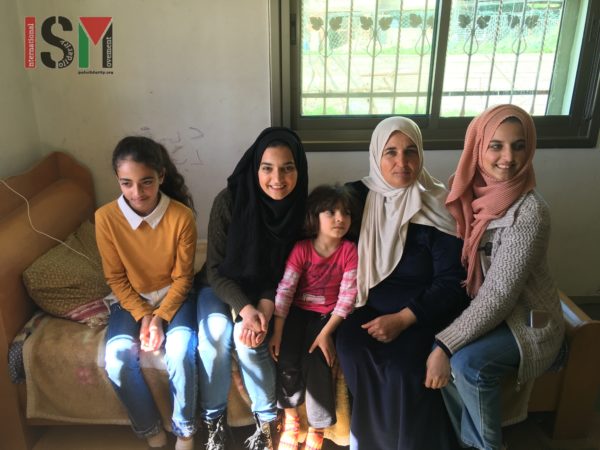 Dima with her sisters and mother in their home in Halhul

The al-Wawi family is cheerful and welcoming beyond belief. Meeting the whole clan two years later, one would not think such intense trauma existed within their home. Dima’s disappearance and arrest caused the family many sleepless nights. All of them applied for permits to visit her in prison and only her mother was granted access and only twice. 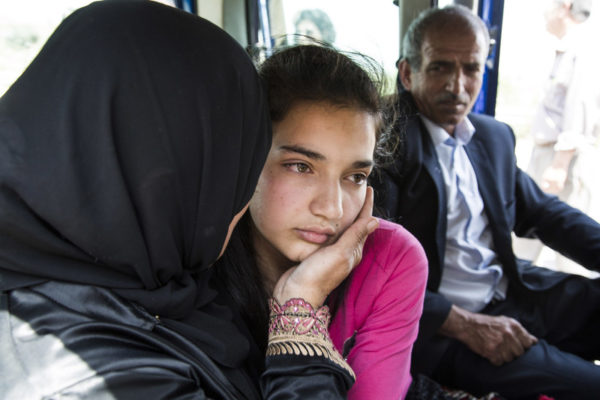 Two and a half months passed and Dima was released early with an 8000 NIS bail. Her memories of prison are brief, recalling her many mother figures, the cold iron cells and falling out of the top bunk bed once. She still wakes from nightmares of prison guards counting her endlessly. The media attention surrounding her case was vast, as the Israeli occupation forces falsely claimed Dima carried a knife to the checkpoint with violent intentions. The family resents this cover-up story as well as the amount of media attention, claiming it makes their family vulnerable to settler harassment in the future.

Dima’s personality is fiery, friendly and cunning. It seems she has room for one emotion at a time; she catches everyone’s attention in any given room. Now Dima is 14-years-old, a grounded young woman despite the knowledge that she could be sentenced to five years in prison if she has another incident with occupation forces.

The Karmei Tzur checkpoint is a constant source of violence against Palestinians, not only to 12-year-old girls but also to many teenage boys. Just last month, a 19-year-old was martyred there leaving his family in complete disarray. After leaving Dima’s, we visited the Zamara family just three weeks after their son entered the illegal settlement with a knife and was fatally shot and beaten as a result. 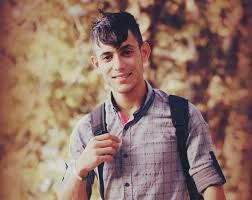 Hamza Yousef Zamara served two sentences in Israeli prisons before his fateful and early end. First in 2014, 16-years-old he spent one week in prison, released on a 3000 NIS bail. Second time, also 2014, this time for 14 months. 45 days of this sentence was spent in intensive torture, Hamza came out a different person, a changed man. 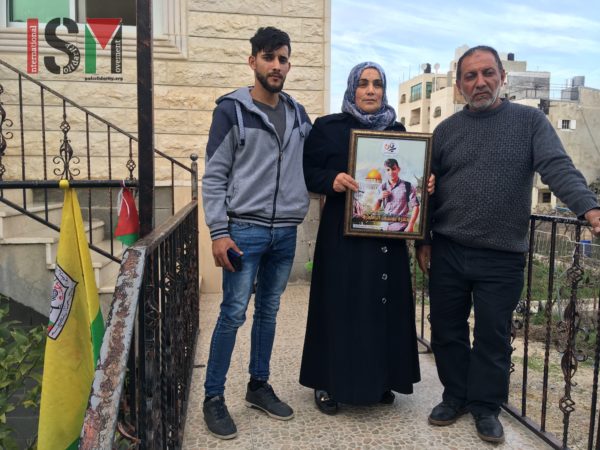 His weeping mother, dressed in black, described his personality after incarceration as withdrawn and psychologically damaged. Hamza’s health was in steady decline and he was severely underweight. His experience and trauma brought him to seek revenge against the Israeli occupation by way of bringing a knife to the checkpoint. According to Israeli sources, Hamza “very lightly wounded the guard in a stabbing attack in Karmie Tzur.” His attempt at violence was met with severe beating, stabbing and four shots fired fatally killing him.

It is custom in the Islamic religion to bury a body within 24 hours of death. However, Hamza’s body was held by Israel out of spite for 10 days in the freezer. When finally released, Israeli soldiers invaded the family’s home interrogating his family, detaining his father, Yousef Zamara, and deeming Hamza a terrorist directly to his family. Israeli forces also threatened the family “that they would pay for [Hamza’s] actions.” 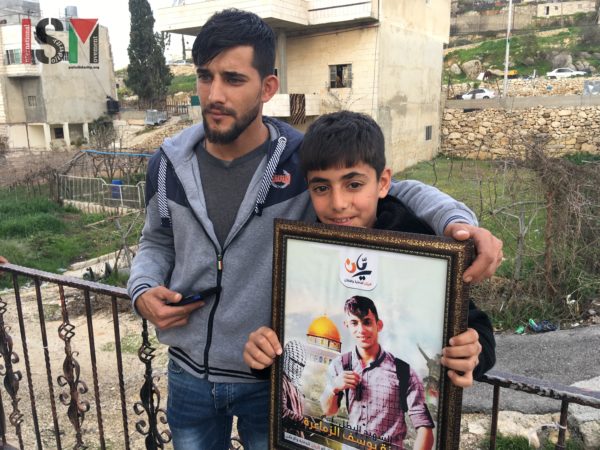 Sadness cannot begin to describe the collective emotion of his family and friends. All dressed in mourning, Hamza’s photograph was quietly passed around and tightly clutched by his loved ones. His mother, Arwa Zamara, remembers identifying Hamza’s frozen body as “the most difficult moment.” Arwa and Yousef have two other sons imprisoned by Israel.

When asked how she has the strength to go on after losing her child, Arwa mentions the overwhelming support from her neighbors and community. Her daughter chimes in, “we are one body;” no one is alone in the brutality of the Israeli occupation.

Dima, a child, and Hamza, a young man, did not deserve the brutality and injustice they experienced by the Israeli legal system and occupation forces. The worst part is they are not alone, and their stories are not uncommon. All Palestinian civilians are tried in military court, even children, with a conviction rate of 99.7% while Israeli civilians are tried in civil court.

Palestine is home to countless administrative detainees, political prisoners and martyrs. Internationals and Palestinians wonder when this will stop. When will the international community take responsibility and halt their support of Israel’s unjust legal system and illegal occupation of the West Bank and Gaza.

We wish the al-Wawi and Zamara families well in recovering from their trauma and hope their families have peace within their homes.