Yesterday in the Palestinian city Al-Khalil(Hebron) there was a large military presence in the area due to the coming Jewish holiday, The feast of Sarah. Solders from the Israeli military detained Palestinians, prevented children from getting to their schools, and shot rounds of tear gas and sound bombs at school children. 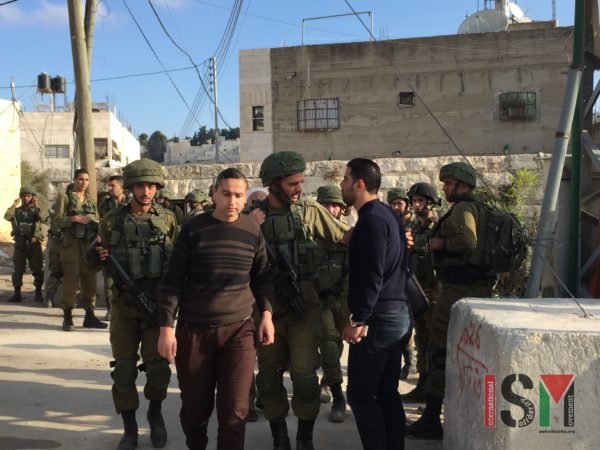 Two teachers are turned back from the checkpoint at Ziad Jaber School. They were prevented from accessing the school for a good 15 minutes.

Israeli Military forces prevent teachers from getting to work

At around 9 am this morning, a group of 100 soldiers and 9 military vehicles moved from the area of the Ibrahimi Mosque, gathering at the checkpoint by the Ziad Jaber Elementary school. There, Israeli soldiers blocked two Palestinian teachers from moving through the checkpoint to get to work for 10-15 minutes. Students were slowly allowed to find their way through the large group of soldiers to the school. A group of soldiers then attempted to intimidate ISM activists monitoring the situation.

Large groups of soldiers were observed searching streets around the school and looking over the school walls with their weapons. One of the soldiers justified the excessive military presence with the claim that a child had thrown some stones. During the blockade and search of the area local people were prevented from passing for over half an hour. 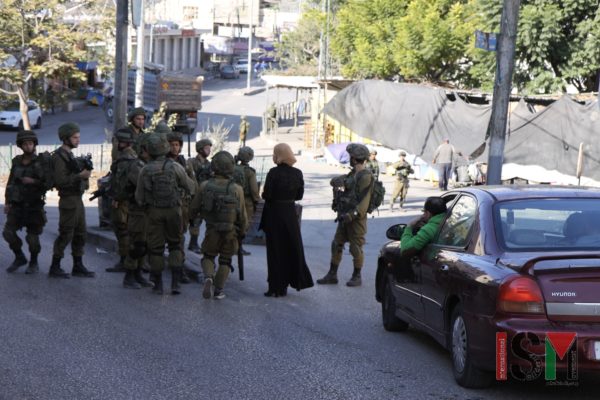 A pregnant Palestinian woman maintains her dignity with occupations soldiers who have invaded the H1 Palestinian area of the Salaymeh neighbourhood. Her request to pass was finally granted after a 10 minute delay.

Though the school has suffered many difficulties for years as a result of the occupation a teacher commented, “We have never had anything like this before.” When the situation had dissipated, the ISM activists followed a large group of soldiers down prayer road through the Salayme checkpoint to the Tareq Bin Ziad shopping centre. Soldiers randomly stopped Palestinians who were with younger children sometimes holding their passport at least for 15 minutes and restricted movement of cars and pedestrians through the area. Soldiers entered at least four buildings around the intersection and were seen on roofs and in upstairs windows with their weapons as others patrolled side streets sometimes letting off sound bombs for no observable reason. After approximately half an hour the soldiers began to retreat into the H2 Israeli controlled area. As they retreated Palestinians emerged from their houses and young people began to protest the invasion of their neighbourhood and the suppression of their commemoration of Yasser Arafat’s death. The retreating soldiers responded with sound bombs and tear gas.

During this time, another ISM team were at the other end of the neighbourhood down the street from the Qeitun checkpoint. Students from the Tareq Bin Ziad School had been prevented by the Israeli army from doing the annual parade by their scout group to commemorate Yasser Arafat’s death. Many soldiers blocked the area around the school and declared it a military zone. A teacher told the activists that the army tried to enter Hajirriya School, where students had found refuge to, arrest some of them. Luckily, teachers managed to stop the soldiers who still blocked off the street forbidding anybody to pass. Some soldiers took up positions on a neighbour’s roof here too. 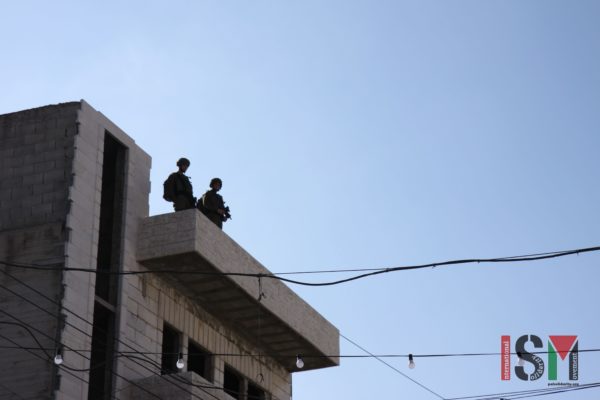 Soldiers positioned on a roofs in Salaymeh.

From the outset, the soldiers made it clear that the parade was out of question. After the initial attempt to enter the school, they kept blocking the entrance as many more soldiers showed up. After more than half an hour of negotiation between the soldiers and the school Principle, other teachers and some observers from the organization TIPH, the commander authorised the passage of Tareq Bin Ziad Secondary School teachers and their respective pupils. They eventually reached the Tareq Bin Ziad school under the strict surveillance of soldiers to start their school day.

Meanwhile, back in the Hajirriya School, the daily activities started as normally as possible. “We’re used to that” said a teacher in the Headmaster’s office, while he poured the coffee for one of the ISMers who was there. 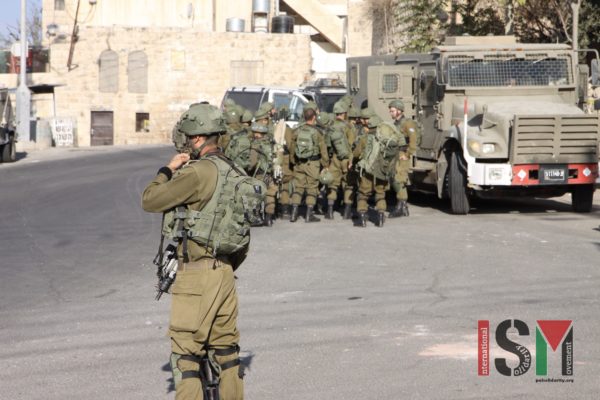 Soldiers and armoured Vehiciles at the Jaber Junction checkpoint.

At roughly 12:00 PM, following the clashes in the Salaymeh neighbourhood the younger half of the students were leaving the Zaid Jaber School for the day. Another ISM activist witnessed the detention of the headmaster of the school, Muhanned Azam. The soldiers at the checkpoint near the school kept him in the sun for over half an hour without any reason or charges against him. As the older half of the students were leaving, many gathered around him in support, sitting with peace signs raised and singing Palestinian songs. As they sang more soldiers arrived to suppress their nonviolent protest. 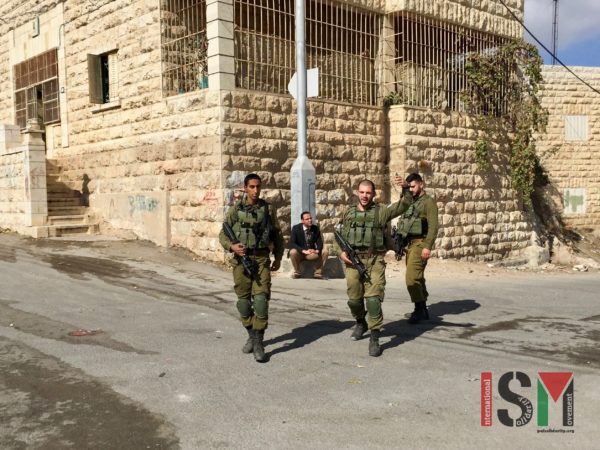 The Headmaster of Ziad Jaber School is detained by Israeli occupation forces.

At roughly 12:35, two teachers who were leaving for the day, Ibrahim Zahida and Rashad Irziqat were pulled aside, arbitrarily detained, and ultimately arrested on the pretence that they were interfering with the soldiers’ operations. They were taken to the Jabara Police Station in H2 for questioning. The soldiers also threw a sound bomb into a crowd of children, teachers, and journalists who had gathered to observe and document the scene. 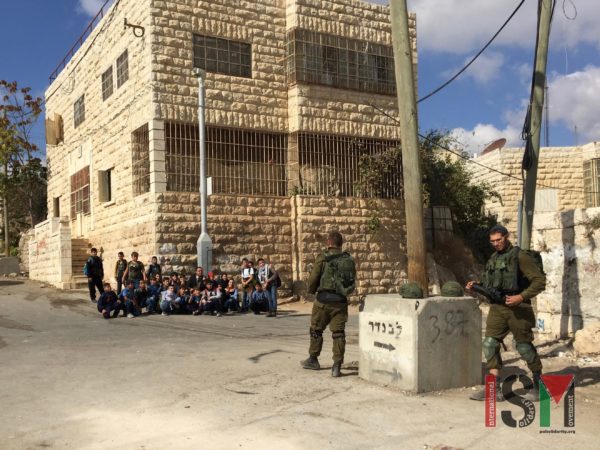 Student from the school gather in solidarity with the detained headmaster.

Later that afternoon groups of settlers from nearby illegal settlements were seen peeing on the streets and filming Palestinian children aggressively. Two settlers were spotted in a window yelling at young Palestinian children “Porn, Pornography” and other sexual references. When confronted about it by Palestinians, the settlers just laughed. “We were just sitting there drinking coffee when they came out of the windows yelling dirty words at the kids. They have no respect,” an nearby ISMer said. A few minutes after that incident a 30-year-old Palestinian man was arrested by the Ibrahimi mosque after being detained for over three hours. 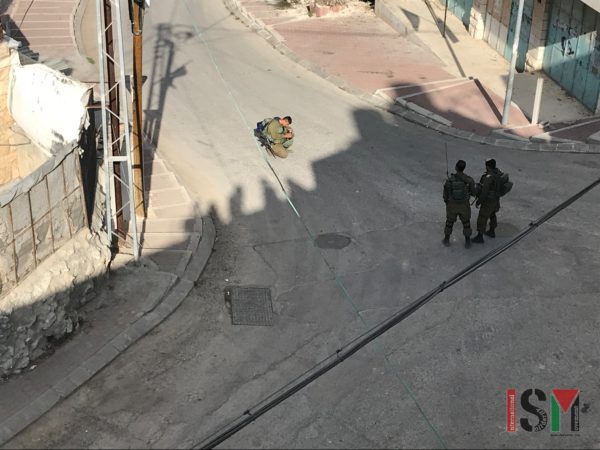 Soldiers from the Israeli military pose in front of a Palestinian house in H2.

The situation in Hebron is tense at the moment due to the Jewish holiday, The Feast of Sarah. The Israeli Military has, from this afternoon, prevented Palestinians from entering the Ibrahimi mosque. The large military presence and the restrictions of Palestinian daily life are expected to continue over the weekend.

Teachers negotiating with soldiers to reach the school with their students.