New
Home / Press Releases / A Negligence of Rights and Responsibility

A Negligence of Rights and Responsibility

ISM members attended a demonstration in the village of Kafr Qaddum, located in the northern part of the West Bank, not far from Nablus. The demonstration, a weekly happening in the village, was against the blockade of the main road from Kafr Qaddum to Nablus. The closure of the road was justified by Israeli forces for “security purposes”, since the Kedumim settlement next to the village was expanding. “Closure” only signifies that Israelis, settlers and army personnel are allowed to use the road. Palestinians or anyone who happens to “look like an Arab”, unless they can prove they are not are considered as security risks. If not labelled as terrorists then they are portrayed as demographic threats to the Jewish state. Checkpoints controlled by soldiers are strategically placed all over the West Bank to ensure that such roads are only used by Israelis. 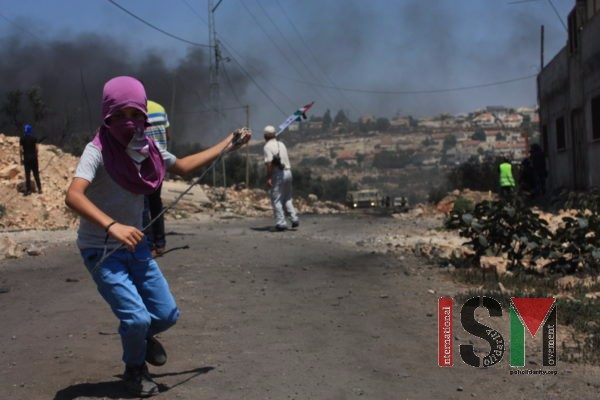 Participating in village demonstrations before, I felt I knew what to expect. However, this demonstration was pretty extreme. The first time I wen, it felt like I was being baptised by tear gas, and 4 or 5 people were shot – one of them was standing next to me. That was two years ago, and I can still recall the dazed feeling of your instinct telling you to run, but you rationalise your way out of it to stay.  I get this feeling to some extent every time I am in clashes.

I go to demonstrations to stand in solidarity with Palestinians and to act as international presence. I exercise my privileges as a white, european man, which in Kafr Qaddum means little chance of getting shot. Little chance of getting shot is a privilege in Palestine. International presence in a crowd of Palestinians can potentially mean that nobody gets injured, or that the occupation forces, for once, choose to follow protocol and shoot at leg-height. Mostly because it is bad publicity for them to shoot a Danish citizen, and partly because I stand there with a camera, which in turn means bad publicity for the Israeli army.

As in most of these demonstrations, young Palestinians responded to the occupation forces by throwing stones towards them. Some by hand, some using slings – all put their back into it.. Whilst 95% of the rocks miss their target, the ones that don’t are usually followed by cheers and applause.

During this demonstration I was accompanied by two fellow activists from the same movement as myself, and other internationals were also present. I had bumped into one of them a few weeks earlier. He was representing an NGO similar to the initiative I came there with. Now during the clash he came up next to me, and said pondering, “Look at these kids… some of them are no more than six years old.” I concurred to his comment and followed up:“It’s incredibly sad, but also impressive and encouraging to see.” I knew from previous conversations on the topic, that such a statement could be seen as provocative or even unethical to some. He hesitated for a moment and said that he didn’t know if he thought it was a good idea; “Somehow it just ends up legitimizing the army’s actions”. I replied that I didn’t agree, and reminded him that throwing stones at soldiers wearing slug-proof vests, helmets, who get to ride in armored jeeps with guns on top of them, is merely an act of symbolism, and I let him know that, “I see this as part of the non-violent resistance.” Then I realized that I didn’t know what he meant by “legitimize” – he could be talking about public opinion in the western world, in which case he would be exactly right. He continued, “I just can’t help but think it would be more effective, if they didn’t throw stones.” I found myself trapped. He kept going with an argument I had debunked so many times in my head, and still I wasn’t able to do it now that it mattered. I didn’t know where to begin.

He was referring to the idea that throwing stones makes the Palestinian resistance violent, which means you can argue that they themselves are a part of the problem that the occupation brings with it. That it legitimizes the occupation. It is a common understanding, and I wasn’t surprised to hear it. Rather the opposite; I was half expecting it. Which is also why I was surprised by my own response as he stated his skepticism.

I consider this understanding one of the most harmful things to the Palestinian fight for freedom and self-determination. This is how a lot of people observe it, and it serves as a way for them to swerve the subject of Palestinian resistance, and lean into the “Two sides to every story”, “Everyone in the conflict plays their part” and “It takes two to start a war” narrative, which leads to the endless fallacious analyses, that Israel benefits from. It effectively means that no one intervenes out of fear of getting their hands dirty, while Israel through extrajudicial killings and forced displacement continues the ethnic cleansing of Palestine. The analysis that operates with two parties in a war or a conflict, implying that there is foundation for comparison. The kind of analysis to which We, in the West, can conclude, “I see how the Palestinians are suffering, but I do not support violence.” and then turn a blind eye. Palestinians have to prove their suffering to earn our backing. We have little regard for the dignity of these people, despite that they practice it as explicitly as possible: by facing tanks, with nothing but rocks in their hands.

This guy didn’t turn a blind eye, and I’m not trying with this piece to disparage him at all. I have great respect for the fact that he chose to come to Palestine to support the Palestinians, and for the fact that he went to the demonstration that day. My point is that even people who makes such honorable choices can easily fall victim to the narratives that the Israel/Palestine-conflict is an unsolvable truckload of pity and that the only thing we can do is hold the hands of the six year-olds, while the grown ups carry on in the agonising so called peace-negotiations. If this is where our analysis takes us, then that should set off some alarm bells. The ‘peace-negotiations’ have so far served one side only; Israel has put on a masquerade for the international community to think that they were working towards peace, making us stay on the sideline. We do not need to stand with Israel for them to succeed, we just need to stay out.

Apart from the fact that stones do little to no damage, and they are far from anything that could legitimize the chemical gas, and the different types ammunition used against civil Palestinians by the Israeli army, there is another blind-spot in this reading of the confrontation; When We, the West, call for Palestinians to act non-violently and without throwing stones, we refer to an imaginary situation in which we would support them if they put down the slingshots. This however has never been the case. Time and time again, Palestinians have played by the rules, chosen diplomacy rather than armed resistance. Sadly, the only message we have sent to them has been that: as long as they do not make up a security threat, no one cares to listen to them. When Hamas throw rockets, we take them into consideration.

In the context of the civil rights movement’s struggle, in the US, during the sixties, Stokely Carmichael explained non-violence by the following, “If you are non-violent, if you suffer, your opponent will see your suffering and will be moved to change his heart.” and continued, “In order for non-violence to work, the opponent must have a conscience. The United States has none.” No one probably expects Israel to go soft on Palestinian resistance after 50 years of occupation and systematic violence. In this case, a non-violent strategy would be appealing for the international society to put pressure on Israel and sanction them if they fail to live up to international law. However, we lecture Palestinians civilians, as we do to Hamas: If you are not a problem to us, why would we bother?

In this case the international community has yet to prove their conscience.

All of this is without mentioning the fact that the Palestinian people have a right to armed struggle against the occupation as recognized by the (UN res. 33/24, 1978). It seems to be a forgotten aspect of the discussion, and to the question of Israel’s occupation in general. Especially since 2001, the distinction between resistance and terror has been confused. Terror served as a keyword in the narratives constructed since, and due to its lack of definition, has been highly useful for an Israeli agenda. By providing a concept that makes up an existential threat to the Jewish people, legitimizing further security means. But according to intergovernmental organizations that the international community usually relies on, Israel’s occupation is in itself illegal, and so are the settlements in the West Bank and their continuous expansion. While the UN in 1978 declared Israel’s activities in Palestine to be “(…) an increasing threat to international peace and security” no perceptible action was taken to change this.

If we can concede to the UN’s view on the matter, and if we can recall it, then we should be asking different questions. While non-violence is a strategy that can be useful – regardless if armed struggle is – the absence of violent attacks on Israel is non-violent in itself. As the right wing part of the Zionist movement denies the existence of a Palestinian people altogether,  Palestinian living and residing in their land, is in itself an act of resistance. Every day  Israel is not attacked, is an example of how Palestinians choose non-violence as a strategy. This can be for various reasons, and it should be kept in mind, that one people is occupying another. And when the occupied organize a pro-human rights’ demonstration and stones are thrown, that does not constitute a security risk to the Jewish state. Israel, in the meantime, condemns stone-throwing as an act of terror and prosecutes Palestinians as terrorists. They can also be found  guilty if they hit a tank with a stone. This of course happens in military courts, as with every Palestinian who is prosecuted by Israeli authorities, regardless of the charge. Palestinian civil rights are simply non-existent in the Israeli judicial system. The apartheid on the ground merged into the legal system long ago.

Apart from Palestinian resistance we can only rely on the solidarity of the international community, to put action behind their condemnations and to sanction Israel until they acknowledge the inalienable rights of the Palestinian people in order for this to change. However, to do so we must be careful to unravel ourselves from the pro-Israeli narratives, that have long surrounded this topic. As for my personal anecdote, this was only my latest encounter with these far reaching pro-Israeli discourses that prevent us from analyzing accurately. It obfuscates a relatively simple issue:  Israel is constantly working to annex the whole West Bank, and erase Palestinians from written history. The point is that to mobilize international pressure we must avoid letting the “stone-throwers are terrorists” narratives confound proportionally on the ground. Too often it becomes an excuse to escape the argument rather than the moral stand that it is being disguised as. We are talking about violence or non-violence, when we should be talking about how Israel is withholding one of the longest occupations in history, crippling the Palestinian society. If we continue to flee instead of confronting this issue, we condemn the Palestinians to a life of continued indignity and ethnic cleansing.