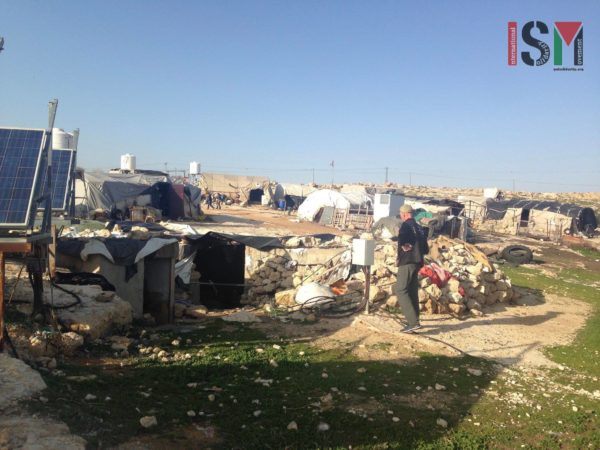 Internationals from ISM and from Christian Peacemaker Teams were asked by villagers to be present in Susya yesterday to give support should demolition go ahead.  The presence of internationals cannot prevent demolition but may encourage Israeli forces to empty the tents about to be demolished with more care, and will provide the international community with documentation of the demolition.

Nasser al Nawajja from the village is used to facing situations like this.  He told us that he felt that some demolition this year is inevitable, but that delays are good because when the weather is better it is easier to cope with the disruption and to rebuild.  The Israeli government is under intense pressure from local settlers and Israeli right wing political groups to remove Susya altogether, but there is strong pressure and support also from the international community which will make complete demolition difficult.  What is most likely, says Nasser, are piecemeal demolitions.

This will not be the first demolition or expulsion faced by the village: since the villagers were turned out of their cave dwellings half a mile away in 1986 for a ‘Jewish archeological park’ they have lived in semi-permanent tent dwellings which have been either demolished or expelled seven times already.  This will be the eighth demolition and, Nasser says, ‘We will rebuild.  We rebuilt seven times already.  We will rebuild again.  A seventh and an eighth time.’

Susya is a symbol of what is happening in the rural West Bank.  Strong settler pressure for expansion of confiscated land meets weak international pressure to preserve some vestige of hope for a two state solution (still championed by the international community).  Who will win this battle is anyone’s guess now that Trump is in the White House.  But the lives of the people of Susya continue to be under threat. As Nasser says, ‘The settlers are in the White House now.’