New
Home / Features / Nothing is simple in Palestine

Nothing is simple in Palestine

Almost nothing in Palestine is what you expect for the most part. And, this is so true of the negative things you see. No matter how bad you think things are or expect them to be, you are almost always guaranteed that they will be worse (usually much worse) when you actually see them. And if you tell people the truth you may be thought to be making things up. But, this is Palestine and things are this unbelievable and this bad. This was true today for me (to put it mildly). Part of our team was invited by an “inspector” from the United Nations office based here in Al Khalil to go to a Bedouin village in the South Hebron Hills where a demolition took place yesterday. 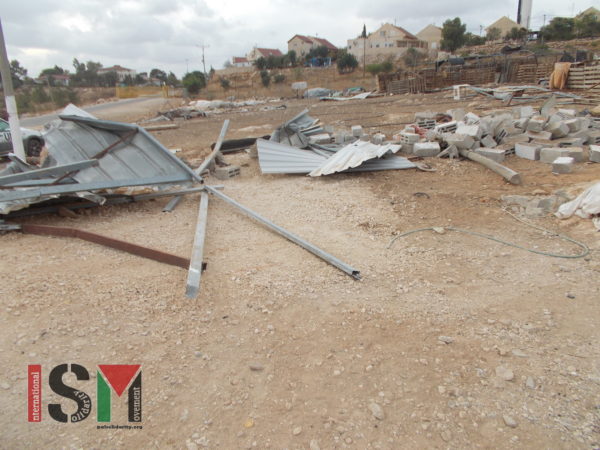 The two demolished structures – with the illegal settlement in the background

Throughout my multiple trips here I’ve been to numerous house demolitions and even sat with families throughout the night waiting for the Israeli Occupation Forces to arrive to demolish a home. I was not ready for what I saw today. On our way to the village our U.N. inspector told us a bit of the history/story of the village. But, when we arrived I just wanted to vomit and I still have a knot in my stomach as I write this. The village of Umm Al Khair was established in 1952 on land the villagers purchased. They have the deed to prove ownership. The village is currently made up of approximately 140 Bedouin (registered) refugees, (approximately 28 families) who are mostly goat herders and farmers. They came here to the West Bank from “the 48” (Israel proper) after their home village was destroyed along with over 500 other Palestinian villages by Israeli Zionists, during the Nakba which created over 700,000 Palestinian refugees.
In 1982 the illegal colonial Zionist settlement of Carmel was established right next to them (less than 50 yards away) on land they stole from the village. Even though we couldn’t see inside the illegal settlement we were informed by the individual from the U.N. that the homes in the settlement were spacious, modern, had green grass lawns and gardens and even a small goldfish pond or two and all of the modern luxuries. In contrast, the village is made up of makeshift tents, crude metal and wood structures with dirt floors. There is no running water, no electricity, and a few crude toilet facilities.
Given that the villagers own the land, according to Israeli law, they cannot be legally evicted. However, the Zionists can make life so miserable that the villagers will give up and leave. This (in all probability) will never happen. They are strong, hopeful, and determined to stay here. This is their home. They will not leave. Even the children who have grown up here and gone off and got university degrees return here to their homes. 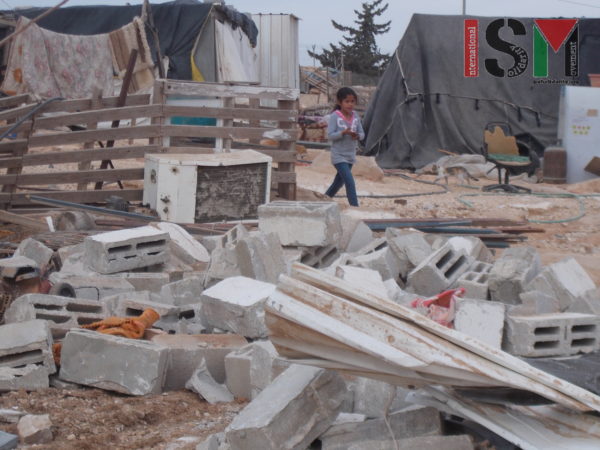 Rubble from the most recent demolition

Israel uses the excuse that the villagers don’t have building permits. But Israel doesn’t grant but a few building permits per year (if any) to Palestinians.
Drones routinely fly over the village photographing , looking for any sign of new construction or rebuilding and the soldiers will return and demolish again and again. And if a demolition order is given for a particular home or building, it is permanent and nothing can be built on that spot again.
There have been 5 demolitions in the past year: October 27, 2015; 1 in April 2016; 2 this past August; and the most recent one yesterday where two structures were demolished. Their Community Center which housed the kindergarten, a computer center, an after school program to help kids with homework, and a library has been demolished several times. There are some international aid programs such as the International Red Cross, several U.N. programs, and from the European Union that have helped with building materials and /or small structures for living. None of these programs, however, can help with the Community Center because it does not provide shelter for people or animals. So it is the children who suffer the brunt of these losses. 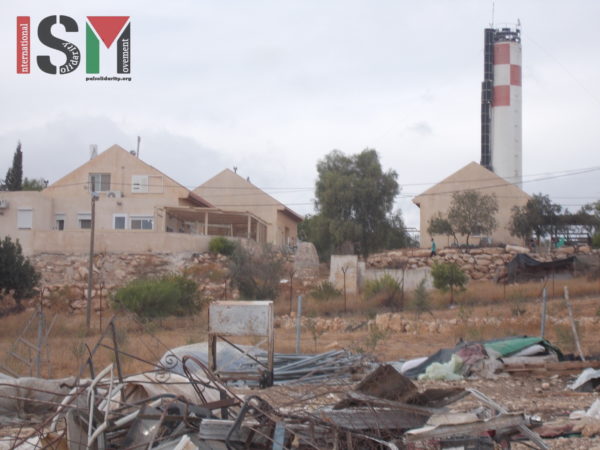 Rubble from the demolition, with the luxurious houses in the illegal settlement in the background

While one of our team members was conducting a video interview I went outside and was swarmed by young children. All smiling, laughing and excited by my presence and attention to them. All eager to show me around the village. Show me their goat herds, their small playground and push them on the swings, take their photographs with their goats. They all appeared to be happy and none the worse for ware. But what I am describing is and has been their life. They know nothing else. It doesn’t make it any less excusable for how these villagers are treated. And this is only one observation from one person visiting one of the scores of similar villages throughout the West Bank. An older woman whose home was demolished in August of this year stated before we left, “We just need the demolitions to stop. We are getting sick and tired of it.” Our U.N. person then said, everyone including most of the aid programs are feeling the same way as this woman and little by little pay a bit less attention as time goes on. Even the government, The Palestinian Authority was called this morning about yesterdays demolition and they stated they couldn’t come to look they had other things to do today. 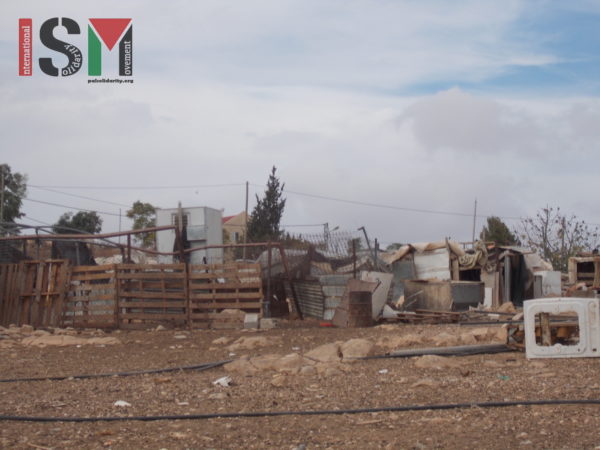 Residential dwelling of some of the families

I’ve always thought (and said) that somewhere inside the Israeli Zionist must still have some small bit of humanity left in them. After what I witnessed today I cannot believe that there is even a shred of humanity left in any of them. Today was by far the most overwhelming and depressing day I’ve had in all of my trips here to Palestine, and I’ve seen quite a few depressing and overwhelming things during these trips.
What can you do? Join the Boycott movement in your country. Write to your elected government officials to stop funding the various degrees of genocide that Israel is committing here in Palestine. Write letters to the editor of your newspapers. Talk to your families, friends, neighbors and let them know the truth. Speak up. As long as our country continues to support the behavior of Israel with our tax dollars we are all responsible!