Last Tuesday both the IWPS team and ISM team were harvesting olives in separate areas when we received a phone call telling us that there had been trouble with settlers from the illegal settlement Yitzhar and Israeli occupation forces near the high school for boys in Urif, south of Nablus. Urif is located 2km away from Yitzhar, which is known for its especially violent settlers, and the school is situated at the highest point of the village, nearest to the illegal settlement. This is not the first time the school has experienced problems of this kind and we quickly left the fields to make our way to Urif.

By the time we arrived, the settlers and Israeli occupation forces had left and the children and teachers had managed to leave the school. We were able to speak with an eye witness, Mr A. Amer, who works in Urif’s municipality and who had been the first person to reach the boys’ school. He showed us the footage he had captured and informed us that around 12pm the infamous settler responsible for security in Yitzhar, known as Jacob, approached the school with two younger settlers by foot carrying an M16 along with another gun. Shortly after, around twelve Israeli occupation soldiers also arrived at the school, meaning that students and teachers were trapped inside. The eye witness told the settler to leave because he worked for Yitzhar security and not in Urif, and was far away from the illegal settlement. The reason given for the intrusion was a false accusation that some boys had set fire to land closer to Yitzhar. We were informed that anyone from the village approaching those lands, would face an immediate response from the army and not settler security. The army demanded to see his ID, which they retained for one hour for no apparent reason. The army also never gave any reason why they were there in the first place, but they did make their way into the village below the school under the pretext of preventing children throwing stones; this possibly as all soldiers have small cameras attached to their uniforms. At 2pm the settlers and army left the area, and the children and teachers were able to leave the school grounds.

This is the second time in the last two months that the settler security has come close to the village. In August he harassed local olive farmers and demanded they leave their fields. Villages in the area often have problems from Yitzhar settlers during the olive harvest, with trees burned or uprooted and villagers attacked, and this was clearly an attempt to terrorise the local community. IWPS and ISM continue to support farmers and villages during this time, and hope to seek further support from the international community to highlight the ongoing plight. 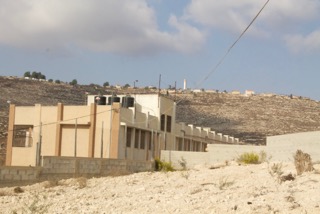