Hatem Abed Hafez Shlwdi death today follows three other Palestinians who have also been killed within the last 48 hours. Amongst them eightheen year old, Moussa Mohammed Khaddour and fifteen year old Mohammad Al- Rajabi who were both shot dead in Hebron.  Video evidence show that Israeli forces used sound bombs in order to prevent pedestrians going near the body of Mohammad Al- Rajabi bleeding on the ground. 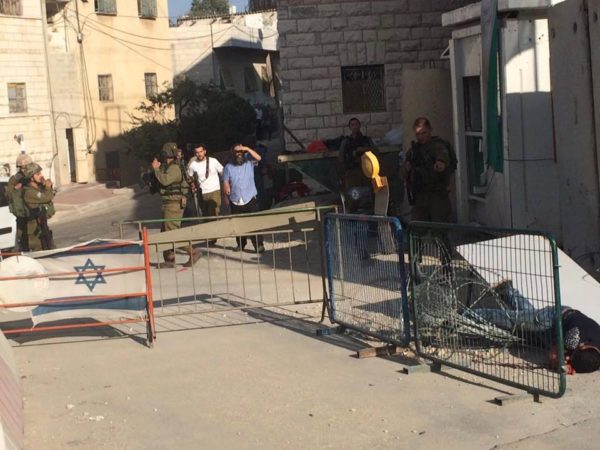 Footage from the 16th of september taken by local

On the same day, a Palestinian man was shot dead in East Jerusalem. Israeli forces also justified the killing by stating that the Palestinian civilian attacked them with a knife. However, eye-witness say that the man did not carry a knife and did not show aggressive behavior before being shot to the ground.

It should be mentioned that a common explanation Israeli soldiers give in order to justify direct unlawful killings of civilians is that the target was carrying a knife. The UN have expressed outrage over previous extra judicial killings of Palestinians, which Israeli forces have tried to defend by stating that they were attacked by knife. However, video-evidence clearly shows no signs of aggressive behavior from the civilian shot dead.

The killings that have happened within the last 48 hours must be understood in the context of the continuous oppression of Palestinians carried out in the name of the Israeli State. 226 Palestinians have been killed by Israelis since october 2015. Some of the killed Palestinians tried to attack Israeli forces, while others were simply alleged to do so. In many of the cases Israeli forces have carried out collective punishments on the slain Palestinians families, by demolishing their houses, and hitherto leaving them homeless, actions illegal under the Geneva convention.