Hundreds inspired at the launching of the Palestinian Youth Forum

On Saturday 24th of September, over 250 Palestinians from across the West Bank and East Jerusalem gathered in Ramallah for the starting conference of the Palestinian Youth Forum. This launch marks a new moment for this youth-led movement to form a clearer and stronger identity.

The forum was organized by 54 Palestinian representatives from ten different youth committees across the West Bank. One of the distinguishing characteristics of this forum and movement is that it is entirely youth-led. The morning offered a series of inspiring speeches from leaders across the progressive movements. And in the afternoon, attendees broke into smaller groups to target discussions on specific areas of interest and connect with others working on similar issues.

This movement is organized by and for all Palestinian youth, includes those in the West Bank and Gaza, in ’48 and in the diaspora. One of the youth organizers of the forum, Hadil Shatara, states, “We’re Palestinian youth carrying the burden of our national and social challenges. We’re aiming to make changes locally and internationally”. This forum launches a wider movement for youth to impact Palestinian society at large.

They will be working on social and economic levels including unemployment, women’s issues, Palestinian curriculum, political prisoner issues and other efforts to resist the ongoing occupation of Palestine. They intend to impact what is happening internally, as well as collaborate with international efforts, including the Boycott, Divestment and Sanctions (BDS) movement.

An initial meeting of youth across Palestine took place in 2009 and they have been building and working on issues since. Among other work, they played a particularly important role in the prisoner strikes in 2012. This forum marks a new moment in collaboration and organization of a Palestinian youth-led movement. It made clear that they are engaged in and energized to work towards an independent and democratic movement focused on social, economic and political justice for the people, by the people. 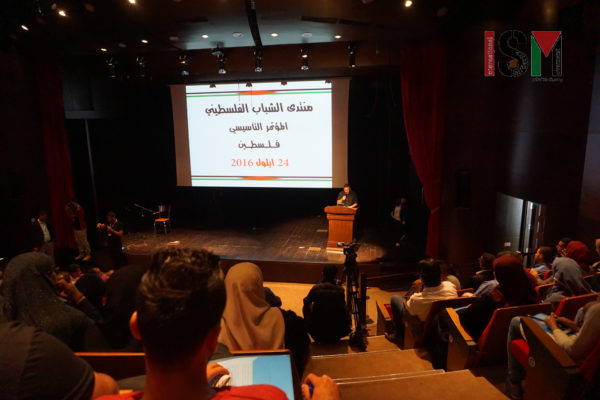