Laila: an unexpected entrepreneur and feminist

I’ve wanted to find out more about Laila since I met her on my first day here. She is the only woman storekeeper in the souk and she has a bed and breakfast here. One evening I saw her standing up to soldiers who did not want to let her pass to go home.   I have seen nobody else with that firmness and confidence. Everything about her is unusual here (or indeed anywhere). When I do talk with her for this interview, I realise just how unusual. 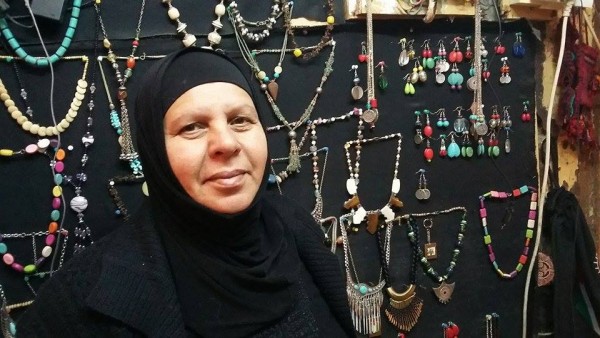 Laila’s store sells the same beautiful traditional Palestinian products as many others in the souk but hers are the produce of a rural womens’ cooperative run by her sister Nawal. Laila serves tea and we settle down to talk. Next to me are boxes of beads, silver and stone that I rummage in idly as I sit with her.

Laila doesn’t come from a Hebron family: she was brought up in one of the hill villages and she is lyrical about her childhood there, in what must have been a tough upbringing. In winters they lived in the village, in a cave with the animals, and in summer in a tent near the summer crops: by the time she was a child her family were living on a tiny vestige of the land they had owned before 1948 and the Nakba. ‘If you think about our lives you never believe how we survive. We survive for little things. I remember when we are young our food is from the garden. We can have vegetables from the garden, we can cook, we can catch birds. It’s a simple life. We have a fire to cook, we have water from the wells or a spring. Its very hard for people but for us we like it, we enjoy it much, much better [than in the city].’

Then after 1967 with the coming of illegal settlements came the fear, and the fear was justified: over the years, either settlers or soldiers have burned down the majority of the village’s olive trees. They lost even more land in the last decade when the separation wall sliced away further areas ‘to make the road straight’ and they could no longer get to their own olive trees to crop. ‘In the beginning they let a few people, not many, enter in so they can pick olives but after they burned the trees. Now the land is empty and they took it and they use it for agriculture and they have a lot of cows in that [settler] village.’ Recently too, settlers who had been evacuated from Gaza in 2005 were resettled in new houses built near their village (so much for the munificence of the Israeli government in returning Gazan land to Palestinians).  ‘It makes you very nervous and sad; you can see how they take your land. They have everything; at the same time you cannot buy even 200 metres of land to build a house for your child.’

The need to make a living drove Laila and her husband for three years to Jordan but she hated it so much they had to come back. Then she worked for many years for a women’s cooperative in Jerusalem until the Israeli government built the separation wall and she was unable to cross to work. That is when her new life in Hebron began: her sister Nawal asked her to take on the shop in the souk from her women’s rural cooperative, and despite Laila’s pleas that she did not speak English, Nawal left her for longer and longer periods until she was in full charge.

‘ISM, they have a girl, I never forget her, she came to the shop every day. She want to learn Arabic, I want to learn English. We start to write for each other and by her she encourage me to talk a little bit and I started to listen to people when they talk. I still learn day by day.’ Now her English is good if idiosyncratic and her entrepreneurial skills are considerable: she never pressures customers (unlike many who are desperate in these difficult times) and people like and return to her to buy.

She has recently branched out into operating a bed and breakfast in the souk (if you are ever in Hebron: https://www.airbnb.com/rooms/2148561?s=LVjE97o5). Again she had the help of ISM. When their Tel Rumeida apartment became a closed military zone some time ago, Laila put them up. ‘Then I have a friend who help me put it on airbnb. People who stay with me teach me how to use it. And after [that] I started to make lunch for people, for groups. Friend by friend they know about me and they like it and they tell other people.’This degree of independence and initiative is surprising in the very masculine environment of the souk. But then Laila volunteers something that I really wasn’t expecting: she says, ‘I like to do some thing women they cannot do it, just for man. I like to put myself in [a] place I can be strong in.’ Why is that, I ask?

‘I don’t know, she says. ‘Because maybe when I grew up with my father, always he taught me how to be strong: when you have problems, talk about them. He was really clear with me. Really, he loves me more than the boys. And all the people in the village they never say I am a girl. I am look like boy, not girl. And I continue with this. I respect the men but I never feel shy to be in places where the men have to be. Allah he cannot give them things more than he give me. He give the same. I am nine months, they are nine months.   I am female is just from Allah, but I feel I can do what they do. I like it.’

Then we talk about life now in Hebron and that is when she nearly makes me cry, and when she tells me that ‘we have not to cry, we have to be patient’. Her two sons have been arrested several times. One threw stones at soldiers when he was fifteen and went to prison. The other attempted to work in Israel without a permit and was imprisoned three times, for 45 days, for three months and then for six months. Both are still unemployed but she would never want them to go abroad to work.‘When my son was arrested I feel as mothers feel and from that time I start to fight: if I see they stopped any boys or children, I have to ask: ‘why you search them? be nice with them, do it in a nice way’. Some are aggressive with me. They are very scary for us and we don’t know what they can do to us but I never care if they want to kill me: if Allah he want to take my soul, its not by their hand. It should be your time is finish. Allah he decide. This is how the mothers of children [who] got killed by the soldiers they believe their time is finish: I cannot say ‘it is haram* he has died’ because it is the will of Allah. This is how we continue. Allah gives the patience. You never believe your children will die, when you start to think you will become crazy. You never believe you can continue.’‘We have to continue by good food, by water, by air, we have to continue: its enough for us.’