On the 24th March, Israeli settlers from the illegal settlements in occupied al-Khalil (Hebron) celebrated the holiday of ‘Purim’. The settlers marched through the Old City of al-Khalil, starting off from the spot where just a few hours before, Israeli forces gunned down two Palestinian youth and then executed one of them in cold blood.

In the morning, Israeli forces shot and severely injured two Palestinian youth in the Tel Rumeida neighbourhood and then left them lying on the ground seriously injured while Israeli medics were attending to a slightly injured Israeli soldier. Palestinian ambulances, that are not allowed to drive on this road that is only for settlers use, were prevented by Israeli forces from reaching the injured Palestinian youth.  In a video published by B’Tselem, a soldier can clearly be seen shooting one of the youth in the head at point-blank range even though he is lying on the ground and is not posing a threat to anyone.

Only a few hours after this extrajudical execution, settlers started their joyous march, dressed up in costumes, with music blasting from a bus, dancing in the same spot where the two Palestinians were murdered in cold blood. 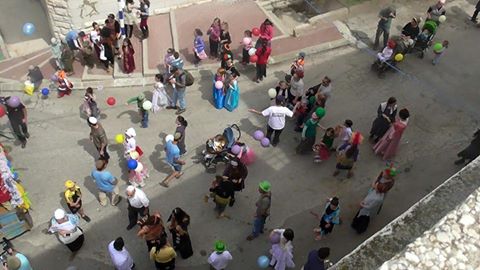 Illegal settlers celebrating in the exact spot where two Palestinians were murdered in cold-blood
Photo credit: Youth Against Settlements

The procession of settlers then proceeded down Shuhada Street, where the main illegal Israeli settlements in the heart of the city are located, before turning towards the Ibrahimi mosque. Shuhada Street, except for a tiny strip, has been completely closed for Palestinians, who are not allowed to even walk there – unlike the illegal settlers who can walk and drive. When the march reached the vicinity of Ibrahimi mosque, Israeli forces started closing off the area to all Palestinians, physically pushing back children behind barriers and preventing Palestinians from accessing the area, even if they were residents, in order to create a space free of Palestinians for the celebrations of the settlers to take place. 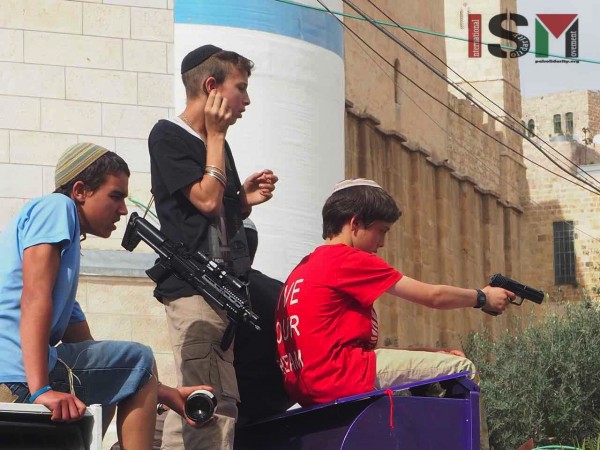 Settler children. One drinking wine, one holstering a machine gun and another aiming a pistol at onlookers Israeli settlers celebrating while Palestinians are denied walking down the street 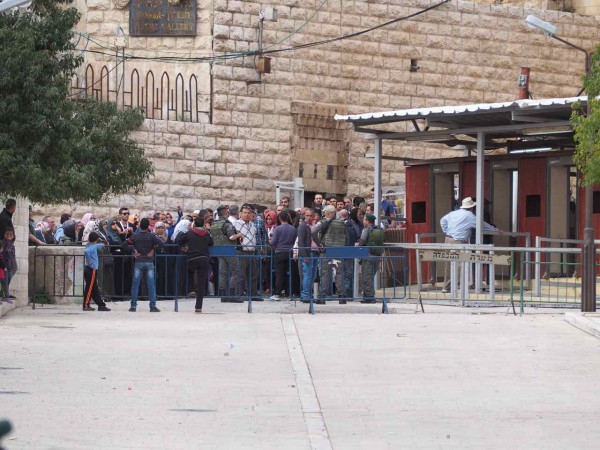 Palestinians and Internationals are not allowed to pass

One of the settlers, of which many were dressed up in costumes, was seen in a shirt flashing a raised fist on a yellow background, which is the symbol of the ‘Kach’, a party of extremist Israeli fundamentalist settlers, deemed a terrorist group even by the Israeli government. The party was founded by Meir Kahane, who publicly called for the expulsion of Palestinians and to end culture relations between Jewish and Palestinian students. On Tuesday, two days before, during celebrations for the same holiday, the loudspeakers of the Ibrahimi mosque were mis-used to broadcast hate-speech calling for the expulsion of Palestinians from al-Khalil. Israeli settlers with a Kahane-shirt (settler in the middle)

One of the settler children dancing on top of a bus was playing with a pistol. Even though the police realized this, they merely took the weapon from him – but then gave it back shortly adfter. If a Palestinian of any age had been seen with anything resembling a weapon, the person would likely be shot immediately. 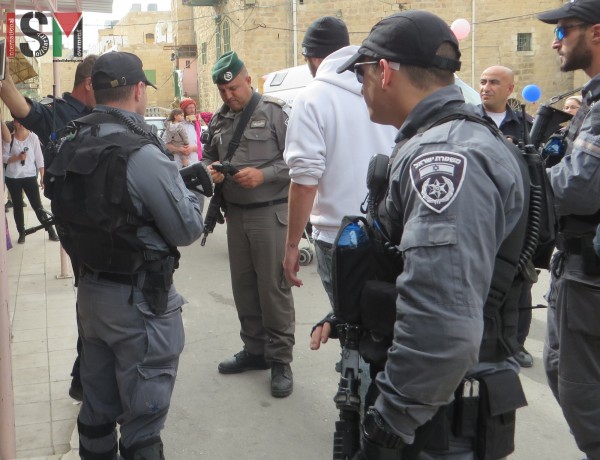 The settlers’ celebrations kept going uninterrupted with Israeli forces ensuring that Palestinians would not cross the way of the settlers, forcing them to stay back, and even closing Ibrahimi mosque checkpoint to ensure no one would even come close. 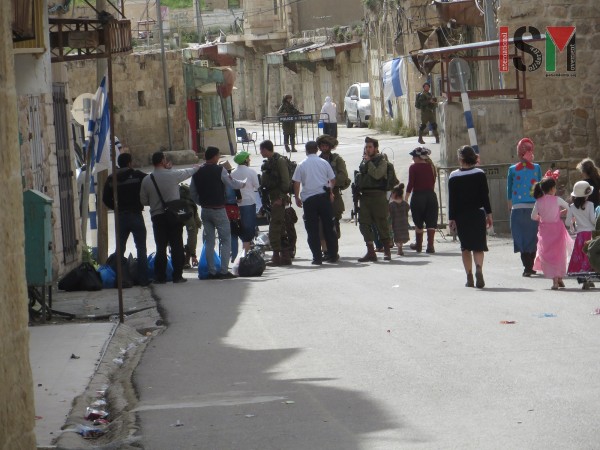 Israeli forces also used the roof of a Palestinian family home in the vicinity of the mosque as a look-out point. This is just another small example of the impunity and supremacy settlers enjoy with the active support of the Israeli forces, while Palestinians are systematically humiliated, oppressed and killed in cold blood under the Israeli military occupation.