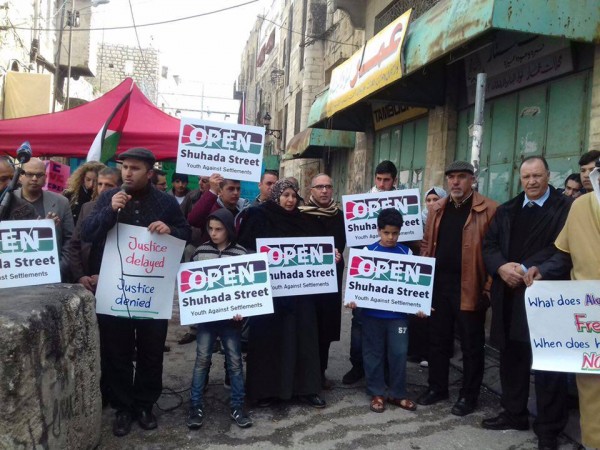 Youth Against Settlement in front of Shuhada checkpoint

Shuhada Street has been closed almost entirely to Palestinians since the Ibrahimi Mosque massacre in 1994, when Brooklyn born Jewish settler, Baruch Goldstein, opened fire in the Ibrahimi mosque, murdering 29 worshipers and injuring 125. In 1997, Hebron was divided into zones H1 and H2, with H1 being under control of the Palestinian authority and H2 being under full Israeli military control. Since 2010, Youth Against Settlements has held annual events in commemoration of the massacre and to highlight human rights violations against Palestinians.

Issa Amro: “The Israeli occupation forces have maintained an apartheid regime in Hebron since the Ibrahimi mosque massacre in 1994. These days there are even more restrictions on Palestinians than ever to make it as hard as possible for Palestinians to stay and remain in their homes. We organize the Open Shuhada Street campaign to increase awareness about what is happening in Hebron and to make the world react against the occupation. The campaign aims to show the world who Palestinians are and not allow Israel to dictate to the media an image of Palestinians as violent people. As Palestinians, we are looking for justice, freedom, and equality, nothing more than that.” 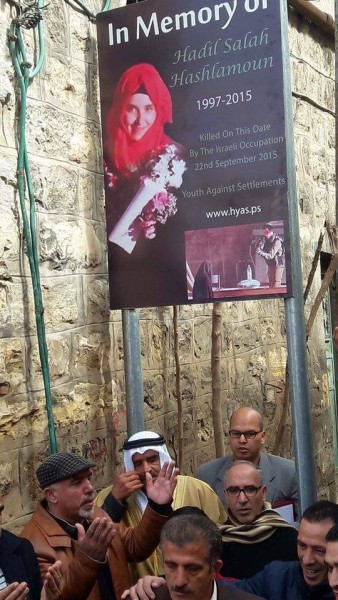 Memorial for Hadeel al-Hashlamoun, gunned down by Israeli forces at Shuhada checkpoint on 22nd September 2015

Issa Amro, coordinator and founder of Youth Against Settlements, spoke about the closed military zones, the long lasting effects of the Ibrahimi Mosque Massacre, the apartheid system of separation in Hebron, and how the occupation targets Palestinians by expelling them from their homes and businesses. Salah Hashlamoun, father of Hadil Hashlamoun, spoke about his daughter, her unlawful killing by the Israeli soldiers, and how it has impacted the life of his family. He called the killing of Palestinians a war crime, and encouraged continued resistance to the Israeli occupation. Abdul-Moneem Zahda, the representative for the families of the victims of the Ibrahimi Mosque Massacre, outlined what had happened at the massacre, he talked about Baruch Goldstein killing 29 people as they prayed during Ramadan in 1994. He stated that the goal of the massacre was to judaize the heart of the city of Hebron. Mufeed Sharabati, a resident of Shuhada Street, spoke about the families of the street continuing their resistance against Israeli forces and remaining in their homes. Palestinian activists, Fareed Al-Atrash received a plaque to commemorate his work as a leader in the peaceful struggle against the Israeli occupation. 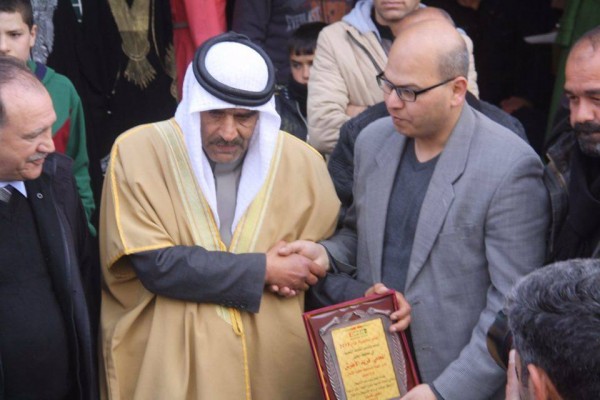 During the press conference, the Israeli army called the Palestinian Department of Civil Administration to request a stop to the event and removal of the sit-in tent. Youth Against Settlements erected the tent on 7 January in response to the closed military zones. Army drones were hovering above as the protesters refused to adhere to the army’s demands.

Mufeed Sharabati, a resident of Shuhada Street: “We will continue our resistance. We refuse to leave our homes. The families here are in the front line of the conflict.”

Many countries including, Italy, Denmark, Germany, France, Switzerland, Brazil, UK, and US, are joining the Open Shuhada Street campaign. Beginning in Italy on 14 February, international events and actions have included lectures, presentations, role-plays, film screenings, social media campaigns, and petitions. Youth Against Settlements activist, Murad Amro, traveled to Germany to give a presentation for the German Open Shuhada Street campaign. There, Murad met with the German Foreign Minister to request protection for Palestinian activists and demand an end to the closed military zones. 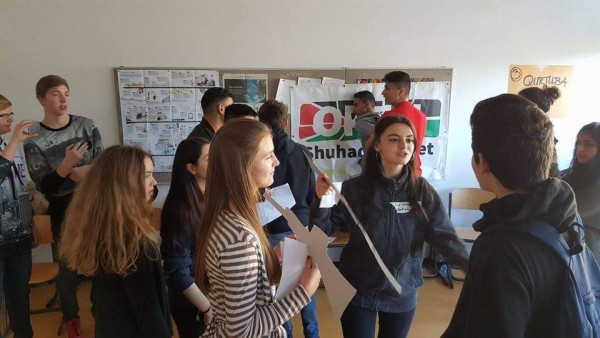