New
Home / Features / Weeks of repression and resistance in Ni’lin

Weeks of repression and resistance in Ni’lin

A walk through the olive groves of Ni’lin village, down the dirt road between stone walls and cacti and past the scattered remnants of spent tear gas canisters, grenades and bullet casings reveals a striking vista: the Israeli-constructed, illegal Apartheid Wall cuts sharply across the fields, the 8-meter-high concrete slabs marked in some places by activist slogans and in others blackened by years of smoke from clashes with Israeli forces. 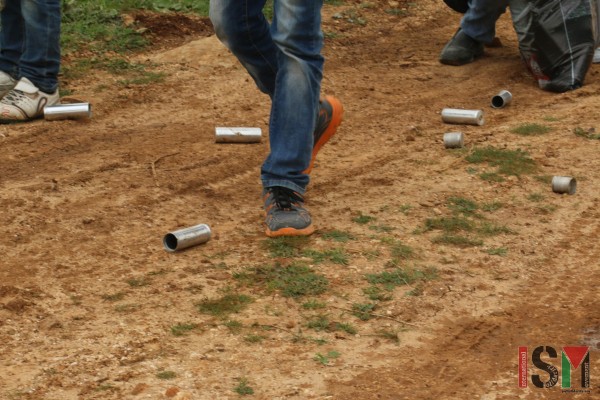 The Wall, completed in 2009 despite a strong campaign of resistance from the villagers, renders completely inaccessible hundreds of dunums of what was once Ni’lin’s farmland and cuts off travel west from the village, which lies close enough to Tel Aviv for its skyline to be clearly visible from a third floor window. Behind the wall lies the illegal Israeli settlement of Hashmonaim, the large, neatly arrayed houses and orange roofs a constant reminder of the continuing colonization of Palestinian land in the West Bank. Every Friday Palestinian activists from Ni’lin, often accompanied by Israeli and international supporters, attempt to reach the Apartheid Wall in demonstrations against the theft of their land, against the Wall, against the Israeli occupation which has made life in the village so difficult and has in recent months claimed so many lives across Palestine.

Ni’lin residents gathered on January 1st and January 8th, as they do every Friday, in the olive groves between the village homes, school and mosque and the wall and illegal settlements. Israeli forces, as always, were waiting for the demonstrators and quickly attacked with tear gas, rubber-coated metal bullets, and foam-tipped bullets. On January 8th, despite the hundreds of rounds of tear gas fired from the ‘venom’ devices mounted on Israeli military jeeps, protesters managed to advance all the way to the Apartheid Wall itself. Many Palestinian youths climbed the wall in a daring display of resistance. 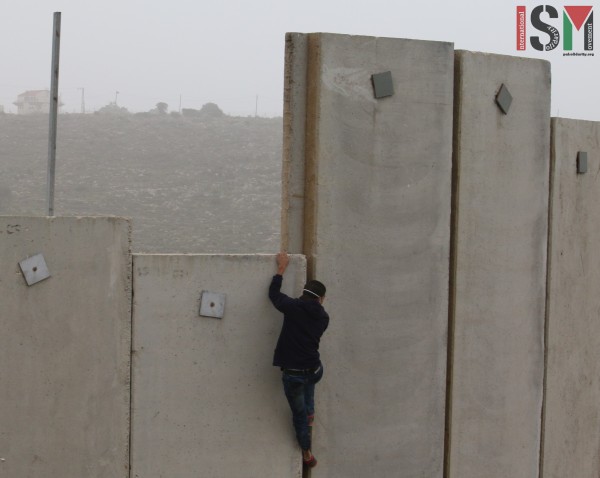 Fortunately no one in Ni’lin on the 1st or the 8th of January needed extensive treatment or hospitalization. On New Year’s Day the weather was stormy enough that the demonstration ended quickly, with the only reported injury being one ISM activist hit with a foam bullet for attempting to take photos near the soldiers. On Friday the 8th of January Palestinian Red Crescent medics reported treating seven people for excessive tear gas inhalation, and at least two were hit with rubber-coated metal or foam-tipped bullets fired by Israeli forces.

The ISM activist who was hit with a foam bullet recalled the experience:

We were walking slowly toward the soldiers, watching the ones who had gone off the road to hide among the olive groves and rocks. In Ni’lin’s extensive fields and olive groves it is always important to watch for ambushes; Israeli military forces might lay low out of obvious sight and attempt to attack or arrest Palestinian youths. As we approached, I was photographing the soldiers in the trees, not even aiming my camera at those standing directly ahead of us in the road, arrayed beside their military jeep. 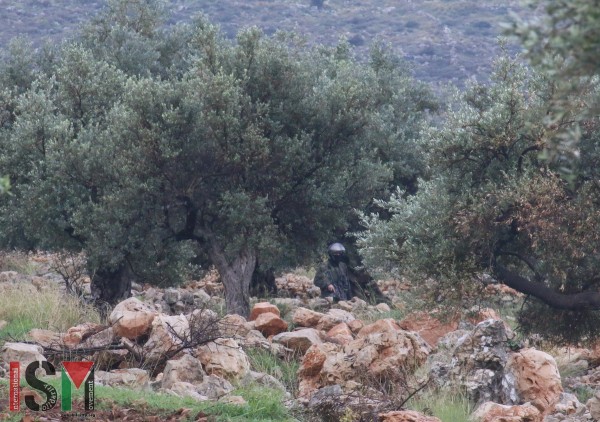 One of the Israeli soldiers in the olive groves

As we got closer I followed my friend’s lead, holding my camera in one hand and my other hand open, in sight of the soldiers, to make it clear I was not a threat and had no weapons. Both of us obviously held cameras, he a video camera and I a DSLR – even if the Israeli forces could conceivably have mistaken them for something else or not been able to see them clearly, one soldier had binoculars and had been aiming them at us earlier.

Though neither of us wore reflective vests and my face was partly covered to guard against the rain and wind, there is no way the heavily armed Israeli military forces could have viewed us as anything other than civilians documenting the demonstration and the actions of the army. They never shouted or warned us away; one second we were walking toward them and the next we heard the loud pop of the bullet being fired and, before I could react, I felt a sudden, sharp blow to my upper thigh and saw the bullet bouncing away. We turned and fled, feet pounding the mud, hoping that none of the soldiers would feel inclined to fire at our retreating backs.

Earlier as the demonstration began, Israeli forces had fired several foam baton rounds down the road, mainly in the direction of activists holding cameras. My friend had warned me to be prepared to run fast if they fired, but I never though they would aim to hit on the first shot. 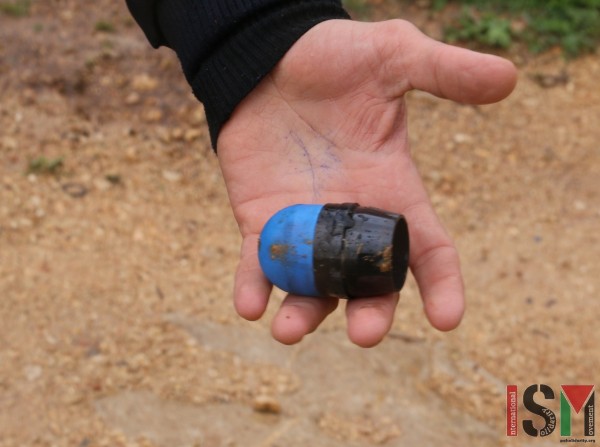 When they shot at us, we were nearer the soldiers (within 10 meters) than anyone else participating in the demonstration. No one nearby was throwing stones; far back down the road the ambulance had parked and Palestinian medics were standing outside, but other than them the area was nearly deserted. Fortunately the foam bullet hit the large muscle at the top of my leg and did not penetrate my clothing. It could be treated with an ice pack and within half an hour I could barely feel where the bullet had impacted; even as it happened, I was more startled than anything else. Palestinian medics, however, have documented cases of significant injuries from foam baton rounds (especially from the black, longer range type) when they hit sensitive areas such as the face or are fired from close range.

The ‘foam baton’ ammunition Israeli border police fired in Ni’lin was, in previous years, used mainly in Jerusalem by the Yasam (Israeli ‘riot cops’), but incidents like this show that the military has expanded their use in recent months, with Israeli forces aiming them at demonstrators in areas well inside the West Bank. 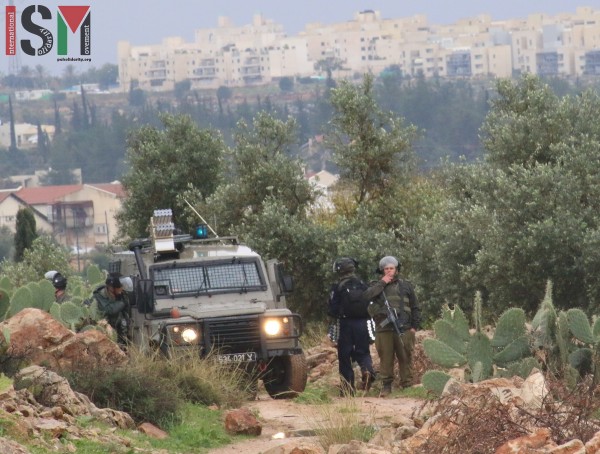 When I came back toward the ambulance, one of the medics explained that the Israeli border police who shot me probably thought I was Palestinian. It was raining, and I had a kuffiyeh covering part of my face; on that day no other internationals or Israeli activists had come to the demonstration. I do not know if they would have shot me if they knew I was from the United States instead of just another Palestinian from Ni’lin attempting to record what was happening. Perhaps they would have shot the young man beside me instead, for nothing more than crossing some invisible line, stepping too close to Israeli forces while filming a clash that at that point the storm had already rendered nearly nonexistent. After we had run far enough from the soldiers to be able to speak to each other, he told me that in his past participation at protests Israeli forces had already shot him with live, rubber-coated metal bullets and tear gas rounds. As it was, I got a tiny taste of the casual violence the Israeli military occupation inflicts on Palestinians every day, no matter what method of resistance they choose.

On December 25th Ni’lin residents did not escape so relatively unscathed; as many in Palestine celebrated Christmas, Israeli forces not only violently repressed Ni’lin’s demonstration against the occupation but also invaded the village and ran over Ayoub Srour, a 44-year-old father of four, with a military jeep. On Friday the 8th of January, a Palestinian Red Crescent medic reported that Ayoub was still in hospital suffering from multiple fractures in his foot.

Ni’lin village is no stranger to collective punishment. Since the start of October, Israeli occupation forces have also constructed an addition at Ni’lin’s entrance: a sturdy gate, yellow metal bars mounted on concrete, which Israeli forces can use to close off the main road leading into the village.  The village has suffered a heavy toll for it’s persistent resistance against the Israeli occupation; from 2008-2009 five Palestinian from the village, including a 10-year-old boy, were killed by Israeli forces.

On New Year’s day protesters braved not only the Israeli military jeeps but also rain, wind and sleet to protest. As the rain rendered tear gas less effective, Israeli forces aimed foam-tipped bullets at demonstrators, often aiming toward Palestinian activists holding cameras. The practice of targeting journalists is common at protests, whether with tear gas, stun grenades, “less lethal” ammunition or even live bullets. Many Palestinian journalists have similar stories: they were clearly holding their cameras and showing that they were unarmed, some wore press vests or shouted that they were journalists, and the Israeli military attacked them in a clear effort to force them to move and to render them unable to carry out their work of witnessing and documenting military violence against Palestinian protesters. 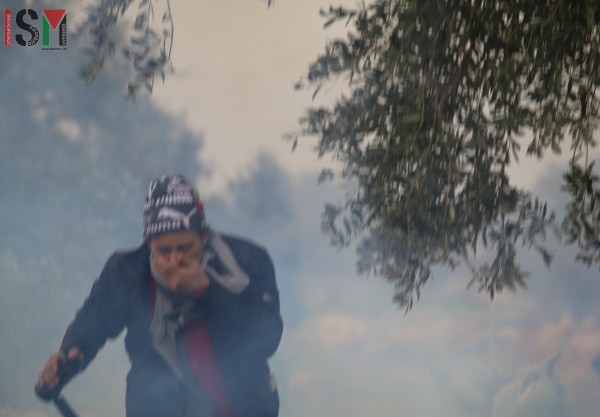 The following Friday was dusty and windy, but without the rain that had impeded both impact of the tear gas and the enthusiasm of protesters the week before. Familiar clouds of tear gas billowed through Ni’lin’s olive trees, shot close enough for the canisters to hit fleeing protesters as they ran.

Palestinian youths managed to aim some of the tear gas back at the Israeli forces, most also using slings to hurl stones at the military jeeps and soldiers invading their land. 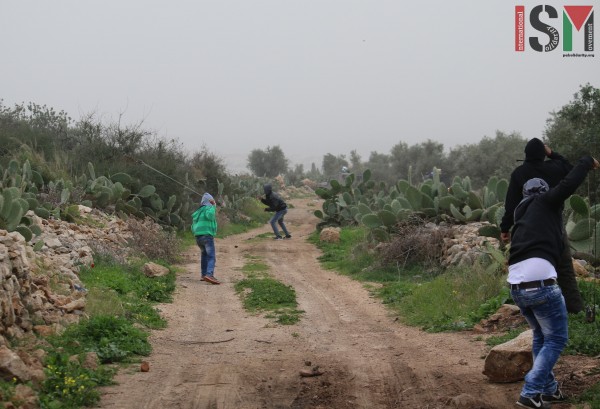 Israeli forces continued to fire tear gas as the demonstration spread out across the fields and continued to advance toward the wall, at one point targeting a group of Palestinian, Israeli and international demonstrators who had simply been attempting to walk through a field near the wall armed with nothing more than a cameras and a Palestinian flag. 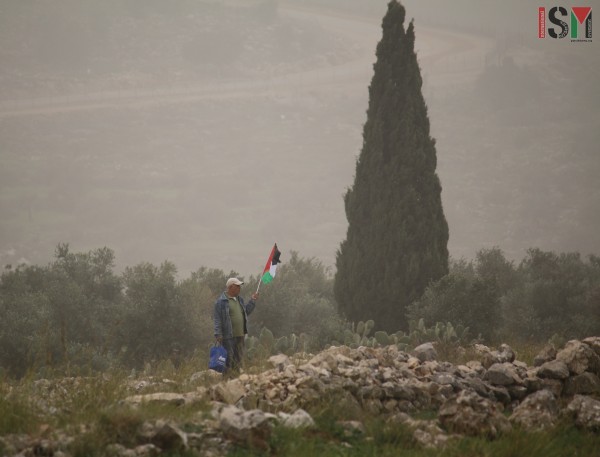 Eventually the jeeps retreated back through the gate in the wall after firing a few final rounds of tear gas, and Israeli forces positioned themselves inside military towers atop the wall as many protesters attempted to take cover while still approaching the length of wall farther from the snipers. 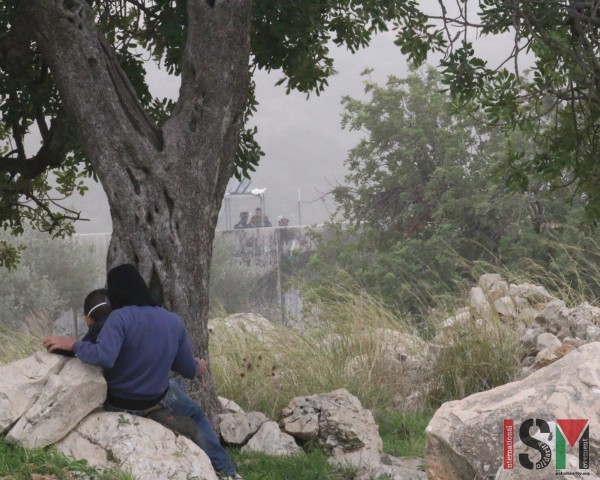 As the first Palestinian protester climbed the far edge of the Apartheid Wall, Israeli forces aimed what looked to the international activist present like either rubber-coated metal bullets or black foam-tipped rounds (possibly both) at demonstrators in the field above the wall. One twelve-year-old Palestinian boy was shot in his ankle by the snipers on the wall. Undaunted, he took cover behind an olive tree and briefly applied an ice pack offered to him before returning to the clash and joining young protesters gathered where the far end of the wall merges into a fence guarding the illegal Israeli settlement road. 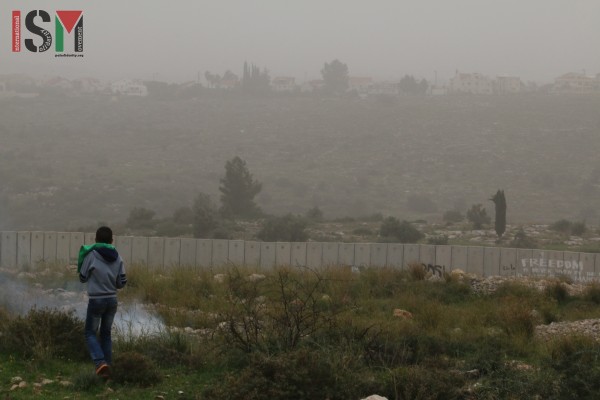 Palestinian youths scaled the wall, constantly on the alert for assaults from Israeli military forces still lying in wait behind it, and aimed a few stones over the wall and fence that had stolen both their land and freedom of movement. One youth was hit by Israeli forces with a rubber-coated metal bullet in the hand as he looked out around the wall. 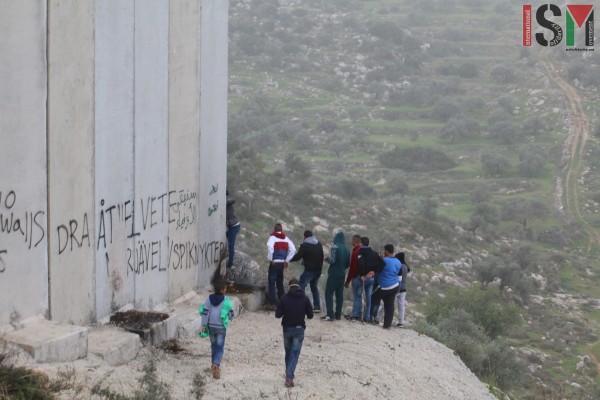 Palestinian youths gathered where the Apartheid Wall turns into a fence

Despite the constant threat of attack and the sobering symbols of oppression the protesters had gathered to oppose, Ni’lin’s youths smiled at each other as they gathered beside the wall near the end of the demonstration. One teenaged Palestinian played a recently popular song on his phone calling for an uprising against the occupation as others helped each other onto the wall, striking poses for the cameras and defying the Israeli forces on the Apartheid Wall’s far side. 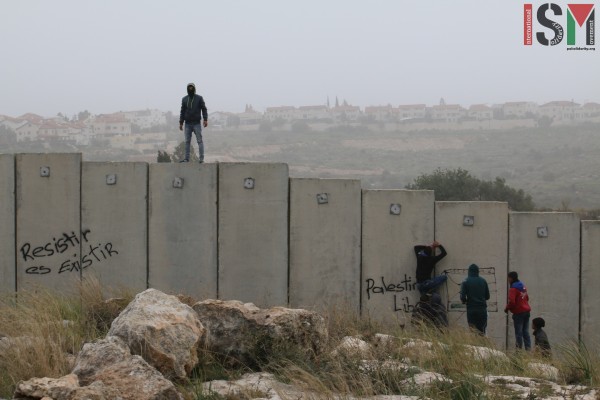 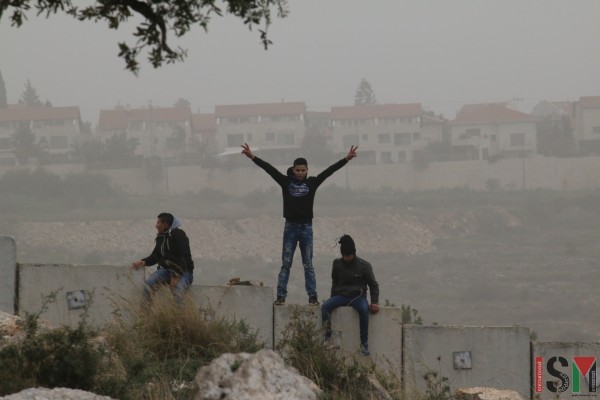 Even with the constant the setbacks, dangers, and collective punishment imposed on Ni’lin by the Israeli forces, Palestinians from the village will continue to protest. Every Friday, they make clear their resistance to the injustice of the Israeli occupation. 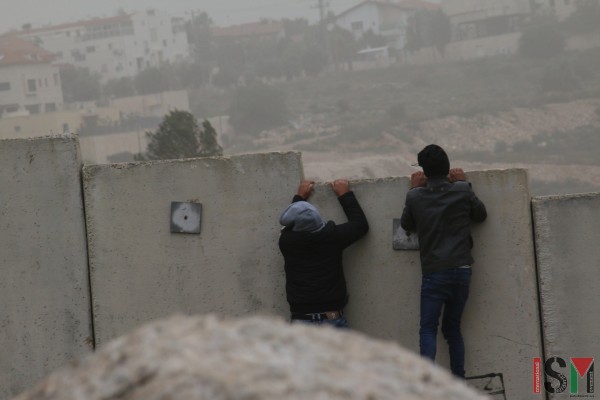 Peering over the wall, checking for soldiers who might be aiming to fire