The soldiers surrounding Ni’lin did not wait; they began firing tear gas as soon as the villagers walked down into their olive groves. Those who had braved the cold, rainy weather to attend Ni’lin’s weekly Friday demonstration were forced to retreat, running choking from the clouds of tear gas launched at them from the hillsides. From the road overlooking Ni’lin’s fields, the tear gas looked like a layer of fog blanketing the olive groves. “They were either straight at us or at the ambulance,” said one ISM activist as the group moved away from a tear gas canister which had landed directly behind them, on the street bordering the olive groves behind and to the side of the protest. The soldiers fired indiscriminately, launching dozens of tear gas rounds at unarmed protesters and activists attempting to film the incident. 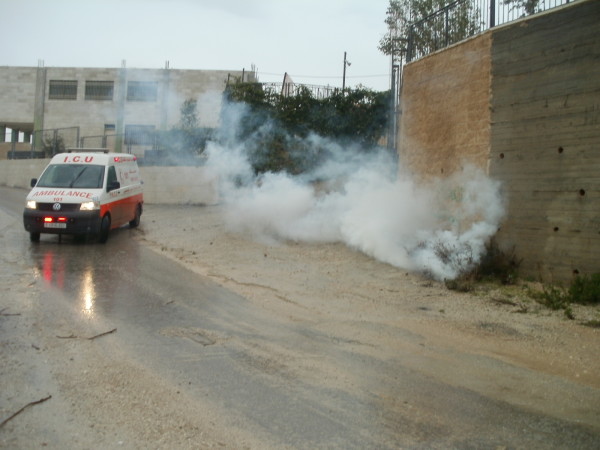 Ni’lin residents, from the Palestinian paramedics to young boys participating in the demonstration, have been forced to grow accustomed to running, to tear gas, to the violence of the Israeli zionist forces enforcing the occupation of their land. The Palestinian, Israeli, and international activists present agreed that last week’s protest was comparatively quiet. This one week, unlike many other weeks at Ni’lin, no one was shot, no one needed to go to the hospital, and no one was arrested. Over the last few weeks, however, the village has endured a campaign of violence and arrests by Israeli forces, who engage in night raids to terrorise the Palestinian families of Ni’lin.

Saeed Amireh, Ni’lin activist, and long-time spokesperson for the plight of his village, spoke with ISM volunteers about the recent situation. Ten people were arrested in Ni’lin in the last two weeks alone, he reported, in night raids occurring nearly every other day. Twenty-five have been arrested since November 4th.

Saeed explained that under interrogation by Israeli forces in Muskubiya (the Russian Compound) prison in Jerusalem, a prisoner from Ni’lin had signed a paper implicating thirty-six people in the village. Those names now comprise a list of people wanted by the Israeli authorities – people who, if they have not already been arrested, must live in constant fear of being taken from their homes and subjected to the harsh procedures of Israel’s apartheid justice system.

Saeed spoke of the conditions suffered by Palestinians arrested by Israeli forces and taken to Israeli prisons: months of solitary confinement inside tiny cells, torture, harsh treatment from other prisoners and entrapment by Israeli spies within the prisons. All are strategies employed by interrogators attempting to trap people into admitting to things they never did. In attempts to finally be released, prisoners will often sign lists of names of other villagers, who the Israeli military will then arrest and subject to the same treatment. Over forty people from the village are currently imprisoned.

One ISM volunteer asked what people did to be put on a list of those wanted by Israeli authorities. “They go and join in the protests” Saeed replied. Even if a Palestinian is doing nothing at all violent, he explained, “They accuse you of joining illegal protests.” In yet another absurdity of the occupation, The Israelis authorities order the village to take permits from them in order to be allowed to protest against the illegal confiscation of their land. 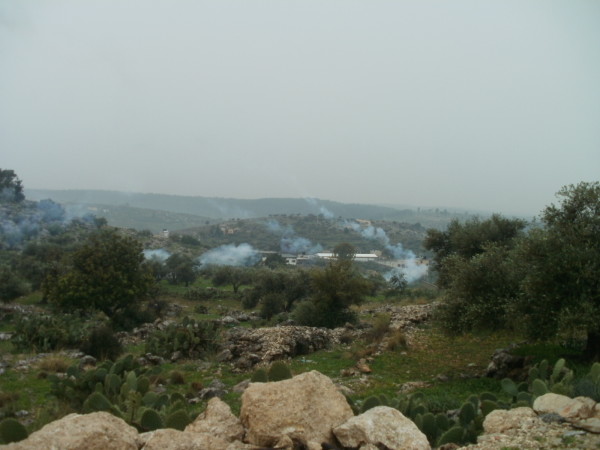 In the night arrest raids, Israeli forces not only surround and invade houses, leaving messes of Palestinians’ personal possessions and furniture behind; they have also begun to shoot inside the village. Saeed spoke of how “Last week, the soldiers came and shot live ammunition.” He explained that people sometimes run away from their houses, fleeing arrest when the soldiers come to surround them. Israeli forces fired live ammunition at one man as he ran away from his home at night.

“When people are asleep, they come at night and start shooting tear gas, and make people suffocate.” Saeed described how the Israeli military have been entering the village with a machine that dispenses large quantities of tear gas when mounted on a military vehicle. “I don’t know how many,” he said, “It makes like a cloud on the ground. They shoot it at all houses.”

Saeed’s family live on the far south-east side of the village, beside the olive groves. These homes are the first in the line of fire for Israeli military incursions. His uncle’s house was burned, and his neighbours also suffered from the tear gas inside their home. “The neighbor’s house, they have a young baby,” Saeed told the ISM volunteers, “A one year old baby, who was suffocating . . . and they were thinking he was going to die, because tear gas entered inside the house.”

The baby had to be taken to the hospital; Palestinians injured with rubber bullets in the last few demonstrations have also had to travel to the hospital to be treated. Medical care in the village is sadly insufficient for the amount of violence its people routinely face, Saeed reported. There is not enough medical equipment, which means not enough volunteers can work alongside the two paramedics employed in the ambulance station.

Nor have medical facilities been spared in previous army incursions.

A volunteer with the Red Crescent ambulances recalled the 2013 Israeli military attack which left a bullet hole in the ambulance station’s window and a scar in the ceiling of a fourth floor room above the street. The Israeli forces had aimed their fire at the building despite the fact that the people there were clearly medical professionals, and unarmed. “They don’t care,” the volunteer explained simply. 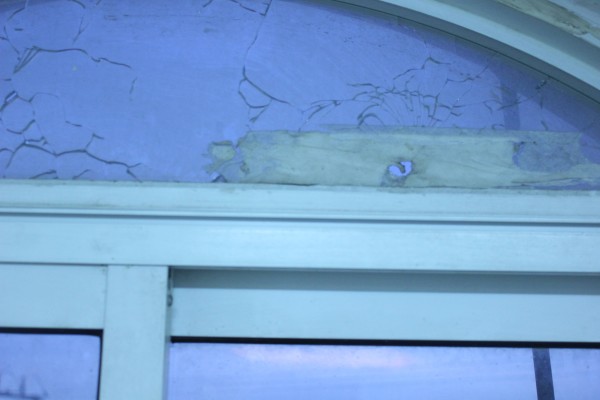 The bullet hole in the Red Crescent building (photo by ISM).

When someone is active in demonstrations, in expressing resistance, Israeli soldiers shoot to incapacitate them, explained one of the Palestinian Red Crescent paramedics. He himself had to undergo a year of physical therapy after Israeli forces shot him in the leg. Resistance is a long and proud tradition in Ni’lin, which participated in both the first and second Intifadas, as well as playing a major role in the more recent Palestinian popular nonviolent resistance against the Israeli Apartheid wall. He said the latest Israeli military incursions are an attempt to demoralise and divide people in the village, to keep them from resisting.

The village has already endured a high toll from participating in nonviolent popular resistance against annexation of their land by the Apartheid wall and by the five Israeli Zionist settlements surrounding Ni’lin. Five people were killed between 2008 and 2009, and many more have been injured and permanently disabled by Israeli military violence. Though both the wall and the settlements are illegal under international law, it is the people of Ni’lin whose homes are assaulted and whose expressions of their legal right to protest are criminalized.

Saeed reported that the weekly demonstrations have recently been subjected to more brutality. In the last months he has seen little international and no media presence in Ni’lin, giving the army free reign to come closer to the village (often into the village itself) and use more violence against the nonviolent protesters. Israeli forces have spared no one in their campaign of repression. One Palestinian journalist, who endured both the rain and the tear gas in order to document last Friday’s action, spoke of his experience filming soldiers at a previous demonstration. A soldier had threatened him, he recalled, saying that if he did not stop filming, “I will break your hand, and I will break your camera.”

Saeed spoke of the occupation’s enormous social and economic toll. “You can’t plan anything,” he told the ISM activists, as they stood with him watching the Israeli soldiers shoot round after round of tear gas into Ni’lin’s olive trees.  Studying, exams, work, family life – all are tremendously impacted by the occupation.

Saeed’s brother is engaged to be married, but his future, like that of all those attempting to continue with their lives in Ni’lin, is uncertain. Saeed’s brother is on the list of people currently targeted by Israeli authorities. “He is going to get married in two weeks, if he is not arrested.”