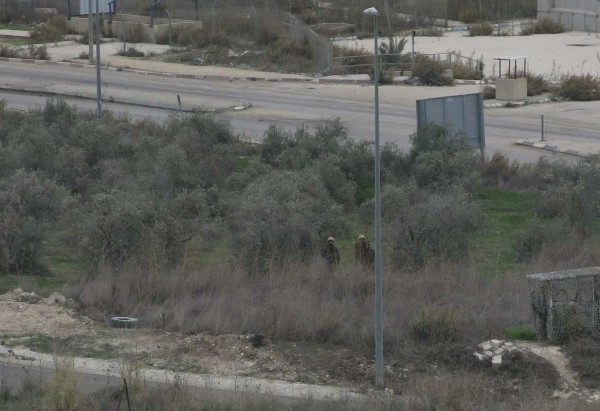 ķ The Israeli forces came to the family’s field

On monday morning, Mahmoud Yasser Eid, a 22 year-old palestinian from the village of Burin, was stopped by the Israeli forces as he went to pick olives with his mother, near the Huwwara checkpoint. The land, that the family has been harvesting for three years along with another family, is located between route 60 from Ramallah to Nablus, and the road leading to the Bracha illegal settlement. The family did not get a permit to harvest this year : “they don’t want us to work near this road because of the situation. They say it’s for safety”, said Mohammed, Mahmoud’s older brother. The family tried to access their land anyway, as olives are an important income to the family of nine children. “People here need the olives”, added Mohammed.

The Israeli forces came at around 8 am, as the mother and son were having breakfast in the field. They controlled and searched Mahmoud and made them both sit there for a few hours while they searched all their belongings. Mahmoud’s mother, Raeda, cried until the soldiers accepted not to arrest her son. They warned him that they would come to arrest him at his house if he tried to access the field again. “We didn’t sleep that night !” said Mahmoud.

During the last three years, the Yasser family was allowed to harvest on this field, but this year they were not granted permission to do so. A neighbour who was picking olives in his field nearby saw the scene and said “they [the israeli army] don’t want anyone to go to this land anymore”. The family thinks that they won’t be allowed to harvest the olives on their land in the next few years, as it is strategically located a few meters away from the main road, route 60, between Ramallah and Nablus, and near the Huwwara checkpoint.

The project of expanding part of route 60 to a wider road, with a financiel help from the US Aid, could explain the difficulties faced by Mahmoud’s family to access their land. The construction, that has already started, will make the road from Yizhar junction (west of Huwwara) to the palestinian village of Beita (east of Huwwara), through the town of Huwwara, a 21-meters wide road. This would lead to an even more limited access to the surroundings of the road for palestinian locals. “Some land might be taken by Israel”, carefully said Raed, from the Burin village council. The situation is already complicated at the moment for the villages close to route 60, and especially for Huwwara, a rare example of palestinian village crossed by a road used by both israeli settlers and Palestinians, that is under permanent surveillance from the Israeli forces. 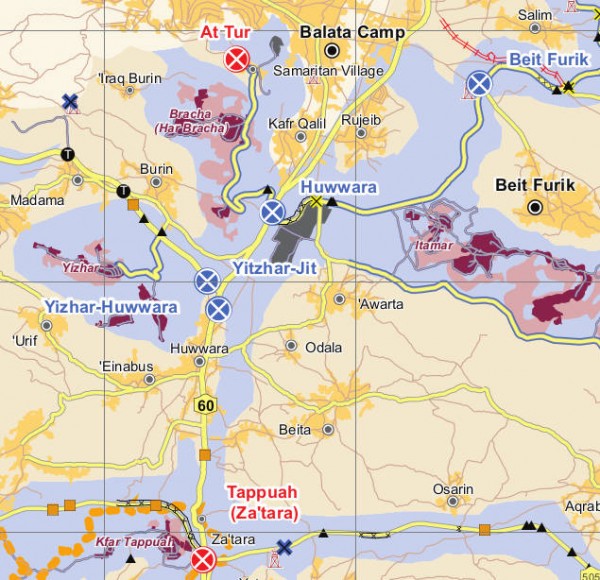 Map of the Huwwara surroundings (ocha)

The “bypass-roads system”, was thought to enable “access to settlements and travel between settlements without having to pass through Palestinian villages”, according to a Bet’selem research from 2004. It has become a way to reinforce apartheid within the West Bank. According to the study from the Israeli organization, many of these roads had as a goal to refrain palestinian villages from expanding. And it had indeed refrained them.