On the second day of the Jewish Sukkot holiday, hundreds of settlers continued filing into al-Khalil (Hebron) creating mass restrictions and sharp escalations in violence against Palestinians living here. Over a period of two hours dozens of them continuously invaded the roof of the Palestinian Abu Shamsiyye family home where several small children live. 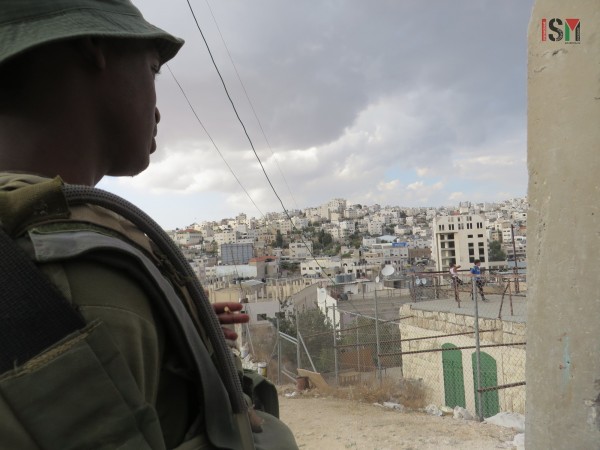 Laughing and trying to gain vantage point to view Israeli forces teargassing, stun grenading and firing rubber coated steel bullet projectiles into crowds of Palestinians in the Bab al-Zawiya area of H-1 Hebron, the settlers spit and cursed at the children, darted towards them to frighten them, called them “Arab terrorists” and one male settler charged at and punched a female ISM international human rights monitor as she filmed him trespassing on the roof. The settler was allowed to leave the scene without incident as Israeli forces stood present but did nothing.

Shortly thereafter, as a Palestinian man and his two young sons tried to exit the gate fronting their home, a crowd of a dozen settler boys sat and stood in front of the gate blocking his exit as he politely asked to be allowed to pass. For fifteen minutes the boys kept the man and his sons trapped until an Israeli soldier finally came and told them to move.

Through the sounds of stun grenading and the blasts of high powered rubber coated steel bullets being showered onto Palestinians by Israeli forces just past checkpoint 56, the settlers, of all ages, took turns standing in the Israeli military post where they posed for photos, shouted curses and racial abuses at Palestinians and international human rights monitors and cheered each time a blast rang out. 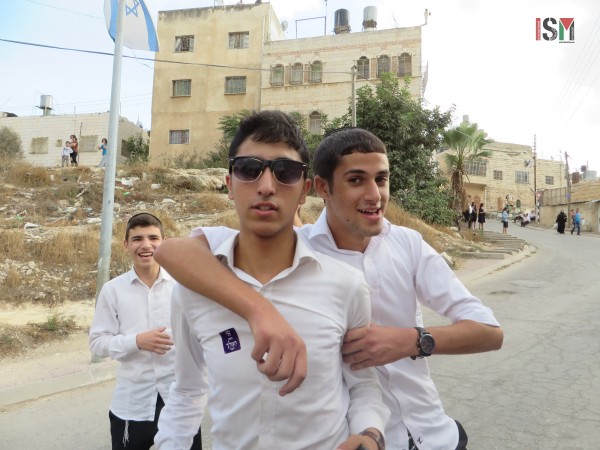 Settlers boys pose jovially for photos after spitting and cursing at human rights monitors and shouting racial slurs about Arabs.

This was the situation just outside the Abu Shamsiyye family home alone. But hundreds of Palestinian families have been literally under siege during the Jewish Sukkot holiday began yesterday as their roads have been closed, their businesses have been attacked, their children have been arrested and their streets have undergone hours of endless assault by heavily armed Israeli forces both on roofs as well as in the streets to allow for settlers to move freely through Palestinian governed areas it is illegal for them to be, in so they could pray in the streets.

The misery continues for Palestinians existing in occupied al-Khalil (Hebron).