The Jabari family owns land sandwiched in between the illegal settlements of Kiryat Arba and Givat Ha’vot. In 2001, settlers illegally took over part of the land to erect a synagogue-tent on the Jaabari-family land. All settlements are illegal under international law, unlike most settlements however, this synagogue has also been deemed illegal under Israeli law. In February 2015 an Israeli court finally ordered the demolition of the tent-synagogue. Even though the demolition was carried out in April, the debris until now still remains on the land and settlers keep on partly rebuilding under the protection of the Israeli forces. 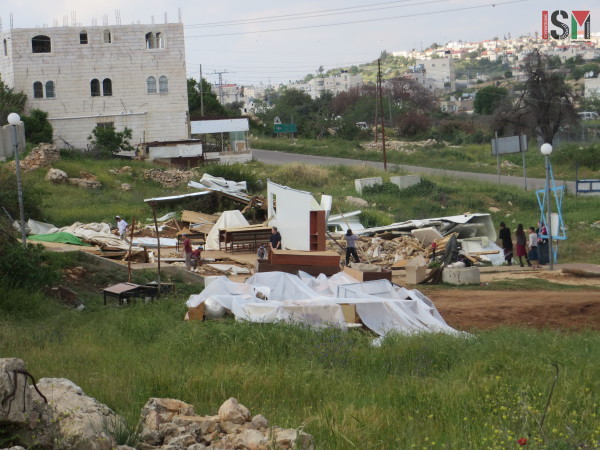 When settlers from the illegal settlement of Kiryat Arba first constructed the tent-synagogue on the Jabari family land , they also erected a path connecting Kiryat Arba with the illegal settlement of Givat Hav’ot. It took the family until 2003 to get a demolition order issued by the Israeli Civil Administration. Nothing happened afterwards until the synagogue-tent was destroyed by heavy snow in 2013, only to be rebuild again by settlers. 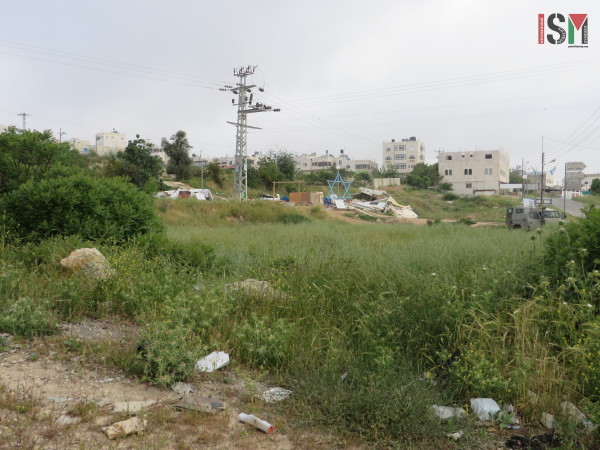 The demolished Synagogue-Tent on the Jabari land

Finally, on the 18th February 2015 an Israeli court issued a demolition order for the structure and the synagogue-tent was demolished early in the morning on 14th April 2014. Even though the tent was demolished, the Israeli military did not clean up the rubble, that until now is still on the family land. Since the demolition settlers have been partly rebuilding the synagogue-tent with the materials still on the land. “Price Tag” violence from the settlers, both adults and children, has rapidly increased since the demolition, with Palestinians walking past on the main road attacked by settlers, and the Jabari family has been attacked verbally and physically, with stones thrown by settlers. Israeli police and soldiers present at the sight- they watch but do not stop the settlers.

The Jaabari family asked for support with harvesting their fodder crops. As all of their land is either bordering the demolished synagogue-tent or the illegal settlement of Givat Ha’vot, Youth against Settlements (YAS) arranged to help with the harvest on 1st May 2015. Together with YAS, volunteers from a range of human rights organisations, both local and international, joined the family to harvest the area directly next to the demolished synagogue tent, the area most threatened by settlers. Israeli occupation forces are prohibiting the Jabaris and all volunteers from using any kind of harvesting tools under threat of arrest. Shortly after harvesting began, settlers, police and the army arrived. At first they only watched the harvest, but after two hours  the Israeli forces declared the field a closed military zone and everyone was ordered to leave. 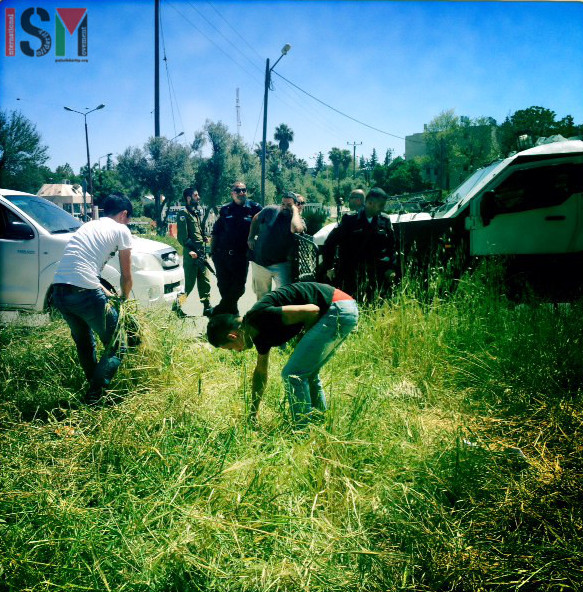 The Jabari family harvesting their land

On Saturday, another small field at the top of the Jabari’s land, close to the police station and the illegal settlement of Givat Ha’vot was harvested without interruption by settlers or Israeli forces. The majority of the Jabari family’s crops still remain to be brought in.
Ethnic Cleansing Farmers Hebron International law Settlement Settler violence Settlers Video 2015-05-03
ISM Media