Village in Focus: As Sawiya

On January 24th, 2015, ISM activists visited As Sawiya, a Palestinian village located near Salfit. The village is home to around 3,500 people.  Seven mountains surround the village; much of the land is occupied by three illegal Israeli settlements – Eli, Rechelim, and Ma´ale Levona. As Sawiya suffers many injustices under Israeli occupation, including military and settler violence against the village’s residents, lands, homes, and schools.

Construction of the illegal settlement of Eli began in 1982. Since settlement construction began, the village of As Sawiya has been subject to constant settler violence and expansion. During the olive harvest of 2005, Israeli settlers attacked farmers, leaving three Palestinians injured.  Israeli settlers also stole a resident´s horse. As a result of this constant settler violence, Palestinians have been unable to consistently plant or harvest their fields. The Israeli military has used this disuse to justify declaring many of the fields ¨unoccupied,¨ using this twisted logic to rationalise their confiscation for further settlement expansion. Approximately 1,500 dunams of land has been confiscated from the village for nearby settlements. In addition to intimidation and confiscation, village residents are robbed of their village spring, trees, and other agricultural resources by settlers. 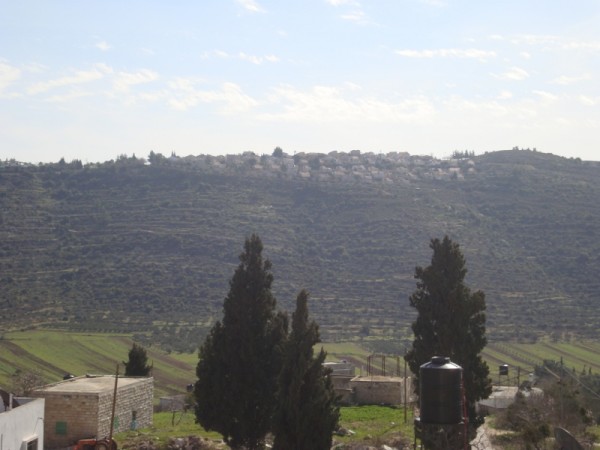 The villagers of As Sawiya have attempted to provide protection for their young by constructing a high wall around the school.  This has had the unfortunate side effect of isolating the students from the view outside their windows and inhibiting what was once easy street access to the building. This restricted access also makes students outside more vulnerable to attacks, as it limits their entry points into the building. In 2010, Israeli settlers set fire to the secondary girls’ school in the village, causing severe damage to both the building and local Palestinian girls’ education. 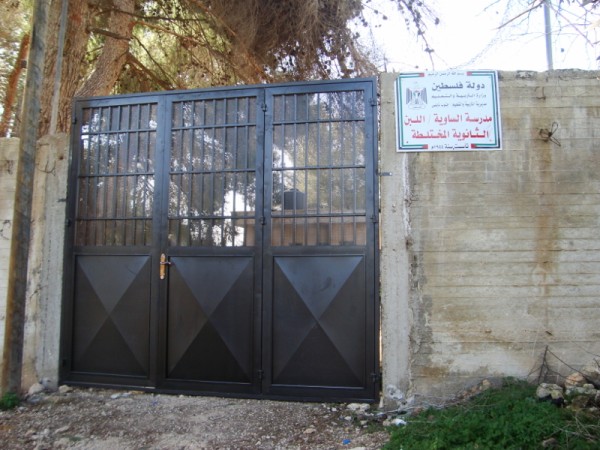 The gate of the village school – photo by ISM

The village of As Sawiya has sought to build a bus station in recent years, but have faced many difficulties. Located in Area C of the West Bank and therefore under Israeli civilian and military control, all construction requires Israeli approval, which is nearly impossible to obtain. Numerous requests by the village have been rejected, declared “illegal¨ because of ¨security reasons,¨ according to Israeli military authorities.