New
Home / Hebron / Interview with 15-year-old Awne Shamsiyeh: “the camera is like a weapon, so I can resist non-violently”

Interview with 15-year-old Awne Shamsiyeh: “the camera is like a weapon, so I can resist non-violently”

In Al-Khalil (Hebron) in the Tel Rumeida area, 15-year old Awne Shamsiyeh lives with his family. 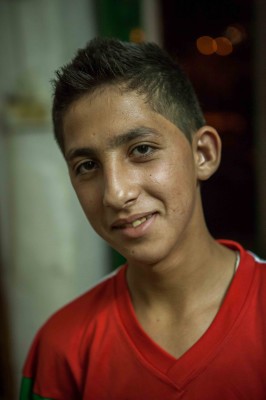 Awne is one of the many Palestinians living inside H2, door-to-door with Israeli settlers, checkpoints, army bases, and the Israeli military.

Over the years, ISM activists have worked with the Shamsiyeh family and spent time with Awne in Tel Rumeida, who experiences many problems with both settlers and the Israeli military. ISMers met with Awne to interview him, and hear his story of growing up under a military occupation.

How would you describe your daily life in H2?

Living in H2 in al-Khalil is very difficult. The Israeli army and settlers try to prevent us from living a normal life. They interrupt our lives on a daily basis and make it unsafe for us to live here. I never feel safe in H2.

What experiences have you had, living door-to-door with Israeli settlers?

In the beginning I didn’t know how to behave around them. Now I’m 15 and have had a lot of experience so I know how to deal with them. I’ve had so many troubles with them (settlers) but I’ve learned from it and know how to fight them. I’ve even learnt Hebrew just from my fights with the settlers and from talking to the Israeli soldiers.

In what way does the constant presence of the Israeli army affect your daily life?

I like to look at it in a positive way; I have become more brave and I now know how to control my fear. I can speak Hebrew now and I know how to deal with my oppressors.

Awne lives with his parents, Emad and Fayzeh, his two sisters, Madlin (16-years old) and Marwa (11-years old), and his two younger brothers, Mohamed (12-years old) and Saleh (9-years old). The roof of the family is often taken over by settlers who want to enjoy the view and harass the family. There is also a military watchtower, which is still occasionally used, on their roof. Their house has been locked in by a wall covered in zionist graffiti, leaving only one narrow entrance to the house. Next to the wall there is another watchtower, which means the family is totally exposed and being constantly watched by the Israeli military. 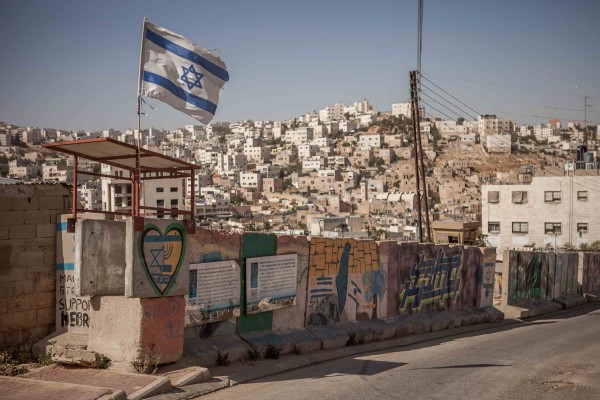 A wall covered in graffiti surrounding the home (photo by ISM).

What are your personal experiences with the Israeli army and the settlers?

I will give you one example. A year ago or something, Israeli settlers went on to the roof belonging to my family to look at the view. My family and I went up to them and told them they were trespassing and that they should leave. They started spitting at us and claimed that our house belonged to them. We said “no this is our house”. The settlers were very aggressive and a fight broke out. The Israeli army came and defended the settlers. The settlers beat me and my father. They beat me unconscious so I don’t remember more. But it’s all on video. The soldiers took me in to an army jeep and drove me to Road 60 where they handed me over to a Palestinian ambulance. They don’t allow Palestinian ambulances in H2, not even in cases of life and death.

ISM were present and documented this attack.

Do you know how many times you have been attacked by settlers, detained by the army and arrested?

Fights and troubles with the settlers happen regularly, so I have no idea. The same with detentions, it happens so often, almost every day. I have been arrested four times. The longest arrest lasted for a day in a police station. Usually they take me to the army base and keep me there for some hours.

What are your hopes and dreams?

I have the dream that the occupation will end and all Palestinians will be free. Also I want to be a mechanic when I’m older.

I don’t fear anything but God.

Are you afraid that the settlers or Israeli army will attack your family?

I was only scared the first time I had a problem with them. Since then I’ve never feared them. If the soldiers or settlers come to my home and make trouble and hurt my family, of course I won’t be silent. I will do anything to prevent the attack, to make it as difficult for them as possible. I will always protect my family. But I am not afraid anymore. This is the life here. You can’t go around being scared all the time. For the Palestinians its like a routine, something almost normal.

A few meters from the family home is a checkpoint with one or two soldiers 24 hours a day, leading up to the Tel Rumeida Settlement. The family is often stopped and regularly  have their ID checked, even if they are just playing in the street or going to the shop further up the road. 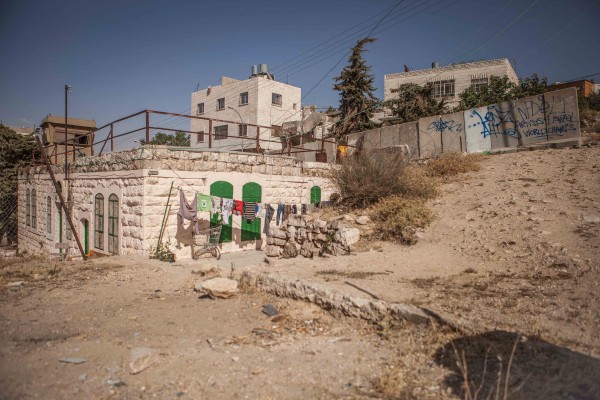 The family home, a military checkpoint can be seen on the roof of the house in the upper left hand corner (photo by ISM).

What do you do for fun in Tel Rumeida?

There is no fun here. There is always a problem with either the settlers or the Israeli army. Even if we just play football they will interrupt.

How do you personally resist the Israeli occupation?

With my mind! I don’t use violence. If there is a situation with the soldiers or settlers I count to ten and breathe before I react. I use my words to resist, like I told you I’ve learnt Hebrew, so I can talk to them in their language. I also use a camera. The camera is like a weapon, so I can resist non-violently. With video and photos I can expose what is happening here to me and all Palestinians.

Do you have anything else you want to share?

Just that everywhere I go there seems to be trouble. At the moment I have a summer job in Azaria in Israel, and after I came the army started to raid a lot of Palestinian houses in the village. It’s like the trouble follows me.