Today in al-Khalil (Hebron), Israeli soldiers viciously assaulted a 15-year-old boy while they were attempting to arrest him. The soldiers accused him of attacking 10 settler youth; he was then taken to Tel Rumeida military base and then released after 20 minutes with no charges.

ISM activists witnessed one Israeli soldier pulling the young teenager towards Tel Rumeida military base, as his two sisters frantically tried to intervene. The 15-year-old was held in the military base, on his own, for approximately 20 minutes before being released.

After the incident, ISM activists spoke to the boy’s father, Abu Shamsiyeh, who described the events leading to his son’s detention. He explained that he was in his house when his two daughters ran to him and said that Israeli soldiers were attacking their brother. Abu Shamsiyeh left the house to witness a group of soldiers grabbing his son by the neck and throwing him to the ground. He told the soldiers that his son has problems with his back, and was ignored.

More Israeli soldiers, including a commander, arrived and when Abu Shamsiyeh tried to speak to them, he was physically grabbed and told he was not allowed to accompany his son to the military base, or to continue filming.

Israeli police did not arrest the 15-year-old as they said it was impossible for a boy of his size to attack 10 settler youth.

Abu Shamsiyeh stated that the family, himself, his wife and all five of his children, have many problems with Israeli soldiers and with the settlers from nearby illegal settlements in Tel Rumeida. However, he explained that on Saturdays (the Sabbath in Judaism), the harassment often escalates due to an increase in settler activity and an influx of Zionists tourists. 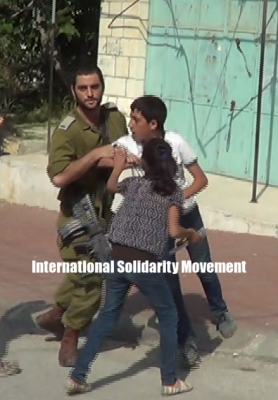